Hanover has put itself at the forefront of the gender equality movement by introducing language changes. Grammarians have previously decried such moves as politically motivated adulterations of the German language. 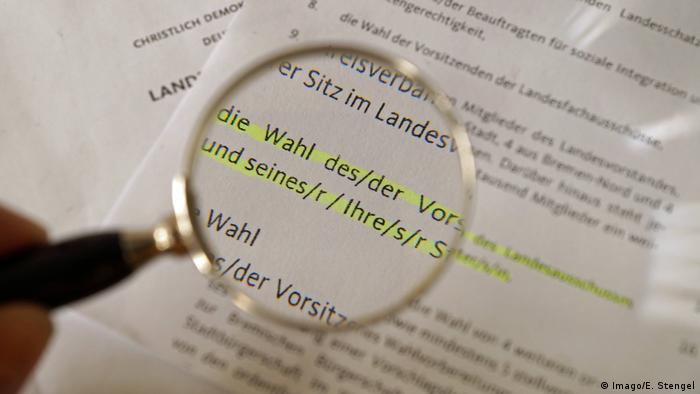 Though American author Mark Twain is often said to have quipped, "Life is too short to learn German," it may well have first been uttered by British classical scholar Richard Porson. Nevertheless, it seems that even for native speakers the learning process is never quite over.

On Tuesday, the city of Hanover, in the German state of Lower Saxony, became the first in the country to introduce guidelines aimed at fostering gender equality through the language used in official communication. All emails, press statements, brochures, forms, flyers and letters will now be written according to the new guidelines.

In announcing the changes, Hanover Mayor Stefan Schostok said: "Diversity is our strength. This is an important signal and a further step toward ensuring that all people, regardless of their sex, be addressed in the fundamental ideas of our city's image as well as the implementation thereof in our administrative language."

Schostok made the comments as the city unveiled its new guidelines, entitled, "Suggestions for a Gender-Equitable Administrative Language."

Though the concept may seem foreign to non-German speakers, the issue of finding inclusive, gender-neutral language has been a hot-button issue in Germany for years. That's because almost all nouns defining someone's career or job are gender-specific. A Polizist is a police officer, but his female colleague is a Polizistin.

Oftentimes the masculine is used to describe groups including both men and women. Although the grammatical masculine has nothing to do with biological gender, it has, nevertheless, caused complications. The issue has been further confused by the issue of citizens who identify as neither men nor women.

Current attempts to shorten the space devoted to accepted forms of differentiation have included the introduction of an uppercase "I" sandwiched in compound nouns addressing both males and females at once. An asterisk, known as the "gender star" has also been added to include citizens who do not consider themselves either.

For instance, the results for department head, or manager, look like this:

In an attempt to avoid the confusion of such formulations, Hanover has decided to move toward language that removes all gender attributes from words. It has thus jettisoned words such as Rednerpult ("[male] speaker's lectern"), replacing it with the neutral form Redepult ("speech lectern"). Teachers, voters and participants will all get similar treatment. The city will also forgo the traditional salutations of Herr (Mr.) and Frau (Mrs., or Miss).

The plan, however, has its critics. Grammarians opposed to the use of the gender star or the uppercase I in compounds have decried such initiatives as a politically motivated ploy to adulterate the German language.

Both the Council for German Orthography and Duden, a pre-eminent language resource in Germany, have voiced opposition to such grammar changes. Those in favor of such changes argue that it is time to rethink the traditional hierarchy that has defined German for centuries.

The bigger issue, however, is whether any such changes will in fact lead to greater equality. Still, none of that will solve the riddle of why a chair is masculine in German, yet its backrest is feminine.

Getting to grips with the German language