Indian transgender politician Apsara Reddy: ′I want to be looked upon as an equal′ | Asia| An in-depth look at news from across the continent | DW | 21.01.2019

Indian transgender politician Apsara Reddy: 'I want to be looked upon as an equal' 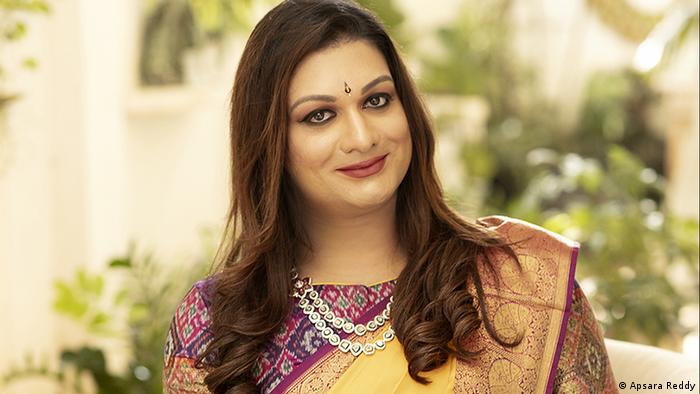 Apsara Reddy this month became the first transgender person to be appointed as general secretary of the Mahila Congress, the party's women's wing. Before plunging into politics, Reddy worked as a journalist and transgender activist.

For a long time, members of India's nearly 3-million-strong transgender community have been an oppressed sexual minority. Being legally invisible, they have battled hard to gain acceptance and recognition. Apsara Reddy's appointment has offered a new hope to members of the community.

In a DW interview, Reddy spoke about her transition from activism to politics as well as the troubles faced by transgender people in Indian society.

DW: You were working as a journalist before. What was the transition to politics like?

Apsara Reddy: I felt that having a political platform was extremely important for me. I think you can do a lot of good for society and also become part of think tanks that shape social policy. It also gives us a chance to infuse some new-age sensibility into politics to make real change happen.

The BJP regime [the current Indian government under the Bharatiya Janata Party] has had very regressive policies regarding women, transgender people and a certain religious minority. We need outspoken people in politics and so I thought, why not join in.

You had also joined the BJP in 2015. Why did you leave the party?

Initially I was given an award by the BJP. I got to meet Amit Shah (the BJP's chief and Prime Minister Narendra Modi's close aide) and other BJP members over lunch, but within two weeks, because of differences of opinion, I moved away.

I was invited by Jayalalithaa's party [AIADMK, active in India's southern state of Tamil Nadu] to be its official spokesperson. Jayalalithaa set the tone, cleared the way and gave me the responsibility of representing the party and, later on, her government on national television.

The kind of affection people showered on me automatically eased me into politics. I grabbed the opportunity with AIADMK, but after Jayalalithaa's death there was a lot of politics within the party. That's when I met the president of the All India Mahila Congress [All India Women's Congress], Sushmita Dev. We had an amazing conversation, which culminated into a meeting with Rahul Gandhi [the president of the Congress party] and my taking up this position.

The most important thing for me was to be in a party that valued me as an individual — not so much for my gender or sexuality, but for my talents.

Have you seen any significant change in people's attitudes toward transgender people over the years in India?

A lot of people make a lot of value judgments and say nasty things about the LGBT community, specifically about transgender women. Several times I have been asked, "Are you a make-up artist or a fashion designer?" or "Do you dance at weddings?"

I have been asked all those awkward and stereotypical questions. I think it's very important to break that glass ceiling and say: hey, you know what, I can be an astronaut, a pilot, a member of parliament or a national general secretary of a political party.

I thank Rahul Gandhi for showing the world a way forward. In India, appointing a transgender woman to lead a mainstream women's organization is a true recognition. That's because all of us [transgender women] are fighting such hard battles to be women and be recognized as women.

Not many states in India have made substantial arrangements to solve the longstanding problems of transgender people in society. Do you think that politicians need to be sensitized in this regard?

It is not the general public that is so much of a problem, compared to ill-informed and agenda-driven politicians. Not all places are conducive for transgender or LGBT individuals. While people are open to giving employment, the whole pity and sympathy factor has not changed. It is not a great place to operate from.

I don't want to go to a workplace where people feel sorry for me. I want to be looked upon as an equal, somebody who is praiseworthy, who can deliver, and who can leave their gender at the door and still be an equal. I think we have a long way to go before we achieve that kind of equality.

Apsara Reddy is an Indian transgender politician. She has recently become the first transgender person to be appointed as general secretary of the opposition Congress party's women's wing.

The interview was conducted by Ritika Pandey.

Fighting for gay rights in India

For the first time in India's history, a low-caste transgender has been elected mayor of a city. Madhu Bai Kinnar talks to DW about her reasons for entering politics and the issues transgender people face in India. (07.01.2015)