Chancellor Angela Merkel said the EU summit had taken a decisive step towards a common European asylum policy. The question now is, will a deal with Spain and Greece be enough to dampen dissent at home?

Can the EU migration summit reach a deal – and avert crisis?

Spain and Greece have agreed to take back asylum seekers already registered in those countries who are intercepted at the Austria-German border, Chancellor Angela Merkel confirmed on Friday. However she said no bilateral agreement had been made with Italy.

"What we achieved here together is perhaps more than I had expected," Merkel told reporters at the end of the summit. Merkel is to inform her coalition allies about the agreement on Friday evening.

Merkel was asked if the agreements with Athens and Madrid met demands from her German conservative CSU coalition partners. Merkel told reporters she believed they even surpassed them: "They are more than equivalent in their effect," she said.

"We are not at the end of the road. I always said that we would never be able to agree a common European asylum system here. But the more we agree among ourselves, the closer we get to a possible European solution. I'm convinced of that."

The tentative agreement with Greece and Spain came on the sidelines of an EU leaders' summit that reached a breakthrough on migration. It will go into effect once operational details are worked out in the next four weeks, the Chancellery said. 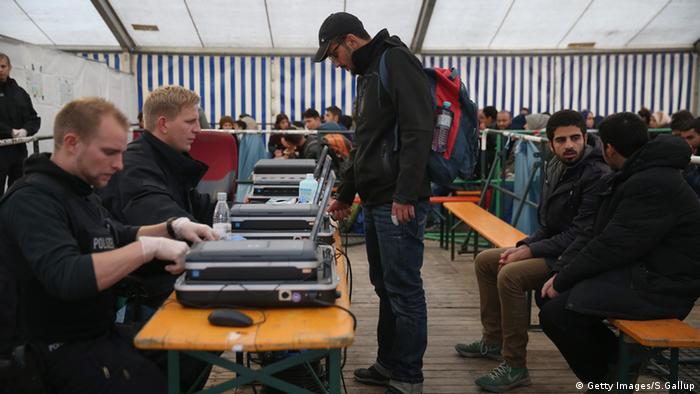 Admitting widely divergent stances on migration within the EU, she described the overall agreement as a "right step in the right direction"

Under the understanding with Greece and Spain, the two countries would be "ready to take back asylum seekers who in the future are identified by German authorities at the German-Austrian border" and who already have fingerprints in the EU's asylum database (EURODAC), the German Chancellery said in a statement.

In return, Germany agreed to "gradually complete and close" asylum applications for families in Greece and Spain in order to promote family reunification.

Germany also said EU border states such as Greece and Spain need additional financial help as well as the provision of police and asylum experts.

"We underline that fact that member states at the EU's external borders need more support, both financially and in terms of providing police and experts on asylum questions," Steffen Seibert, head of the the German governmental press and information agency, said in a statement.

Coalition of the willing

In addition to seeking a European solution on migration, Merkel has sought to build a "coalition of the willing" consisting of EU states cooperating further on migration issues in the absence of a complete overhaul of the EU's asylum rules.

Merkel has been in bitter dispute with Interior Minister Horst Seehofer and her conservative Bavarian allies who want to turn back migrants already registered in other EU member states.

Two weeks ago, Seehofer gave Merkel until the summit to negotiate a European solution before ordering that some refugees at the border be turned back.

Opinion: Angela Merkel's neck not of the noose yet despite EU migration deal

The EU has reached an agreement on migration and Chancellor Angela Merkel is going along with it to save her own skin. But it's not a long-term solution for anyone, writes DW's Bernd Riegert. (29.06.2018)

Germany's interior minister has defended a request to continue checks by accusing the EU of failing to protect its external borders. Germany is one of six countries that reimposed controls in the visa-free Schengen zone. (13.04.2018)