Germany's interior minister said he knows it's hard to believe, but he isn't aiming to bring down the government he's part of. But he hinted he may resign if he doesn't get what he wants when it comes to migration. 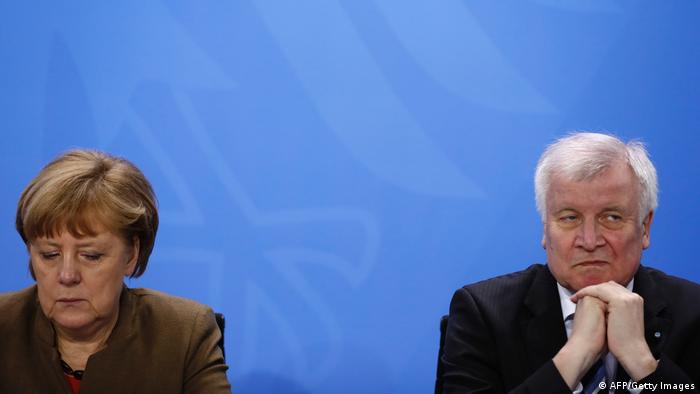 German Interior Minister Horst Seehofer said on Wednesday that his Bavarian conservative party, the Christian Social Union (CSU), was not trying to break up Chancellor Angela Merkel's coalition government in response to a rift over Germany's migration policy.

"I don't know anyone in my party who wants to jeopardize the government in Berlin, dissolve the parliamentary alliance with the [Merkel's] Christian Democrats (CDU) or unseat the chancellor from power," Seehofer said in a television interview with public broadcaster ARD.

"Even if many people don't believe that," he added.

Merkel's CDU and Seehofer's CSU have quarreled in recent weeks over how to stem an influx of non-EU migrants into the country.

Seehofer has threatened to use his powers as interior minister to order officials to reject certain asylum-seekers at the German border unless Merkel, who has publically dismissed the idea, is able to agree to an acceptable deal with Germany's European Union partners at a summit starting on Thursday.

The interior minister said the CDU and CSU would meet on Sunday if Merkel fails to reach such a deal and then "decide about how to move forward." The German government, he added, must show the German people that it "had everything under control" when it comes to migration by respecting and protecting the rule of law.

Finance Minister Olaf Scholz, a member of the Social Democrats (SPD), said he was hopeful that the two conservative coalition partners would be able to overcome their internal feud. "At the end of the day, everyone will be able to work together," he said in a television interview with public broadcaster ZDF.

Seehofer also said he was "confident" the CDU and CSU would overcome their differences, but he also hinted he may consider resigning if they were unable to.

"There are situations in politics where you have a conviction," he said. "In those cases, the conviction is more important than the office."