Europe and the West are showing "double standards" over democracy and their treatment of Turkey, the Turkish foreign minister has said. Mevlut Cavusoglu meets Angela Merkel to commemorate 25 years since five members of a Turkish family were killed by extremists in western Germany. Jürgen Hardt, of Merkel's CDU party, said in the days ahead of the event there was "no room for Turkey's election campaign"

The foreign minister was in Germany to attend an event marking the 25th anniversary of the deadliest xenophobic attack in post-war German history. Five women and girls of Turkish origin were killed when arsonists torched a building in the western German city of Solingen.

German lawmakers criticized Cavusoglu's appearance ahead of the visit over concerns it would be used as a campaign appearance for the AK Party politician in the run up to Turkey’s snap elections in June. Some 1.4 million Turkish passport holders living in Germany were eligible to vote in last year's referendum in Turkey.

Foreign politicians are banned from election campaigning in Germany for up to three months ahead of the vote in their home country. The Netherlands and Austria have also made similar moves.

In March 2017, Turkish President Recep Tayyip Erdogan accused Germany of "employing Nazi measures," while Cavusoglu himself, at a rally in France the same month, called the Netherlands "the capital of fascism."

Sebastian asked the foreign minister why the EU should deal with Turkey as a candidate member given its insults toward members of the bloc.

"Well, last year when the Netherlands didn't want to allow us to meet the Turkish people in the Netherlands there was a tension and the rhetoric was very high and it was coming from both sides and I didn't start that." 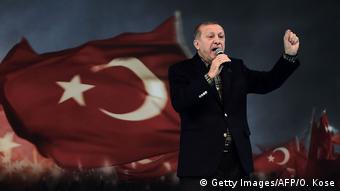 "When we call them Nazis, they [Europe] get uncomfortable. They rally together in solidarity. Especially Merkel," Erdogan said at a televised speech in March 2017

The foreign minister denied that his comments had been viciously insulting and questioned the democratic standards being used.

"You have your own understanding of democracy. And when you violate democratic standards you said it is sovereignty. So how can you try to teach democracy to Turkey then? Who gives you the right then? If you think that you have the right to criticize Turkey for this and that, you should also accept that I can criticize any country when they violate the democratic standards," said Cavusoglu.

According to the European Commission in April, Turkey’s bilateral relations with several EU member states have "deteriorated, including at times offensive and unacceptable rhetoric," which Cavusoglu denied in a heated exchange with Conflict Zone's Tim Sebastian.

"It is not true. You think whatever European countries and whatever the European Union says is right and whatever we say is wrong? This is your problem."

Since the failed coup in Turkey in July 2016, almost 160,000 people have been arrested. The UN High Commissioner for Human Rights, Zeid Ra'ad Al Hussein, said "successive states of emergency declared in Turkey have been used to severely and arbitrarily curtail the human rights of a very large number of people."

"The security of my people is more important than your comments and your understanding. You didn’t want to understand what happened in Turkey and many countries in the West supported the plotters," said Cavusoglu.

When Sebastian pressed the foreign minister to name a country that supported the coup, he refused to name any.

"Many ministers that night actually questioned me at three o'clock in the morning how Turkey was going to treat these plotters, instead of asking me how I was doing personally and how the situation was in Turkey," he said. 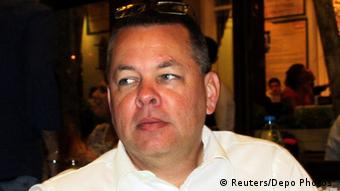 Andrew Brunson, an American pastor working as a missionary in Turkey for 23 years, has been in jail for 18 months awaiting trial. He faces up to 35 years if convicted

Turning to Fethullah Gulen, the Islamic cleric Turkey blames for the coup attempt and wants extradited from the US, Tim Sebastian asked Cavusoglu whether Turkey was engaging in hostage diplomacy over its arrest of the US missionary Andrew Brunson in December 2016.

"It is not hostage diplomacy, my friend. Brunson is accused and the indictment is there … It is a purely judicial process. It is not a politically motivated process," Cavusoglu told Conflict Zone.

President Erdogan was quoted from a speech in Ankara in September as saying, "'Give us the pastor back,' they say. You have one pastor as well. Give him [Gulen] to us … Then we will try him [Brunson] and give him to you."

Cavusoglu said that a trade had not been offered: "This is how you are interpreting and we have never been in this kind of bargaining with any country." Mevlut Cavusoglu told Conflict Zone the Astana process had "been very helpful to actually consolidate the ceasefire, the escalation zones, and also to take some confidence building steps, measures between the regime and the opposition"

On Syria, Sebastian asked whether Turkey, as a leading actor in the political process, had to take some of the blame for failing to end the conflict.

"Assad cannot rule [Syria] anymore because he has killed almost one million people and it is not only up to me … It is up to the Syrian people actually at the end to decide who is going to rule the country," Cavusoglu told Conflict Zone.

The Turkish foreign minister also defended Ankara’s relationship with Iran. "Like it or not, Iran is also an important actor. We disagree with Iran on different issues including Assad … But you don't have to agree on everything with a country or a person to work together. Sometimes you can put these disagreements in the brackets."

In an interview with DW, Sevim Dagdelen said Turkish President Recep Tayyip Erdogan was deliberately creating tension ahead of the vote in June. The snap elections are being held during an extended state of emergency. (18.04.2018)