Turkey's Foreign Minister Mevlut Cavusoglu has warned of "repercussions" against the Netherlands after Dutch authorities blocked his referendum rally in Rotterdam. Cavusoglu spoke at a rally in Metz, France. 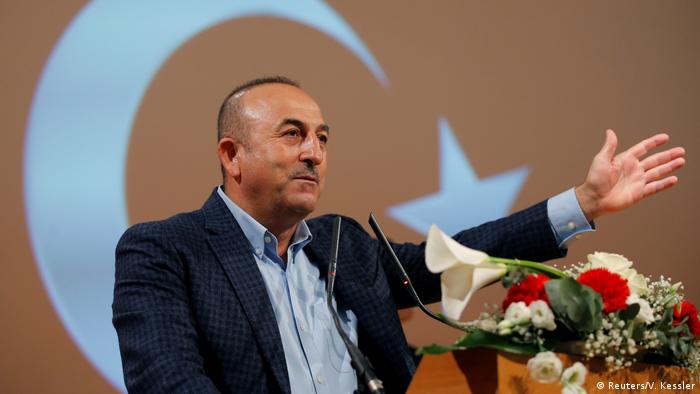 Turkish Foreign Minister Mevlut Cavusoglu continued to inflame tensions between Turkey and the Netherlands on Sunday, labeling its NATO ally as the "capital of fascism."

Speaking at a campaign rally in the French city of Metz, Cavusoglu told some 800 supporters: "The Netherlands, the so-called capital of democracy, and I say this in quotation marks because they are actually the capital of fascism [...]."

The comment echoed similar indictments made by Turkish President Recep Tayyip Erdogan over the weekend, in which he twice accused the Dutch government of behaving like Nazis. In a speech on Sunday, Erdogan called for sanctions against the Netherlands, whose behavior was evocative of a "banana republic," he said.

Erdogan had also made similar accusations against German authorities after ministers were prevented from rallying in a number of German cities. Chancellor Angela Merkel called the Turkish rhetoric "depressing" saying it belittled Holocaust victims and was "so out of place as to be unworthy of serious comment."

Finance Minister Wolfgang Schaeuble said he hoped Turkey "would return to its senses."

Cavusoglu also warned that there "will be repercussions" against the Netherlands after Dutch officials on Saturday barred him from promoting a controversial referendum in Rotterdam and withdrew his landing permission.

A diplomatic row has spilled onto the streets of Rotterdam after a Turkish minister was expelled.

He had hoped to draw support from Turkish expatriates for a constitutional reform bill to expand the powers of the Turkish presidency.

Cavusoglu noted that Ankara had already blocked the Dutch ambassador from returning to Turkey.

"We have other steps in mind," he added. "We've already begun planning them. We will certainly take those steps and more."

The row escalated into riots in Rotterdam on Saturday night. Police arrested 12 people after a tense standoff in front of the Turkish consulate.

Cavusoglu condemned the treatment of Turkish protestors, saying he would release photos of Dutch police releasing dogs on them.

DW journalist Kate Brady in Rotterdam reported locals were worried the clashes could affect the election in three days.

No threat to order in Metz

While the event in Metz had been planned weeks ago, it took on a different dimension following Saturday's troubles in Rotterdam. However, city officials for the eastern French city said they were happy to allow the referendum rally to go ahead as it represented no real threat to public order.

Alain Carton, secretary general of the Metz prefecture, said that in the absence of risk, the rally must be allowed in the name of freedom of assembly.

Similarly, French Foreign Minister Jean-Marc Ayrault said there was "no reason to prohibit this gathering that... poses no possibility of interference in French political life." However, in face of current tensions between Ankara and other EU states, he urged Turkish officials "to avoid excesses and provocations."

However, French lawmakers on the right decried the authorities' decision to permit the rally. Francois Fillon, the conservative candidate in France's upcoming election, argued that France had failed in its duty of showing solidarity with its EU allies by allowing the rally.

Germany and the Netherlands had been "publicly insulted in an unspeakable manner" by Turkish leaders, Fillon said, adding that "a joint position should have prevailed over meeting Turkish demands."

Sunday's rally was organized by the Union of European Turkish Democrats, a lobbying group associated with Erdogan's Justice and Development Party. The group was founded in Germany but also lobbies in the neighboring countries of France, the Netherlands, Belgium and Austria.

The Turkish community in France numbers around 700,000, 160,000 of which live in the country's eastern region.

"I think our democracy can withstand that!"