Turkey has likened the Dutch government to fascist Nazis after the Turkish foreign minister was blocked from attending a political rally in Rotterdam. Ankara has vowed political sanctions against the Netherlands. 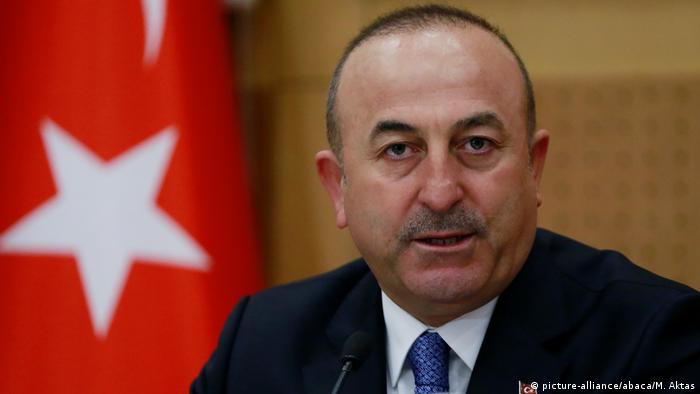 Erdogan is no longer recognizable as the reformer he once was, says his biographer. DW interviewed Istanbul correspondent Cigdem Akyol on the leader's Nazi statements and complicated relations with press. (09.03.2017)

What you need to know about the Dutch election

The March 15 Dutch election could give a boost to anti-establishment populist parties across Europe. The anti-Islam, anti-EU candidate Geert Wilders is shaping the political debate in the Netherlands. (05.03.2017)

Rotterdam has joined a number of European cities blocking Turkish campaigning for a controversial referendum. Turkey's FM said Ankara would retaliate if his plane was denied entry to the Netherlands. (11.03.2017)

The Netherlands has denied landing permission for Turkish Foreign Minister Mevlut Cavusoglu's plane, hours after he threatened sanctions should the Dutch government not allow him to attend a political rally in Rotterdam on Saturday.

The Dutch government said in a statement landing permission was denied because of the "risks to public order and security" created by Cavusoglu's planned visit to drum up support among the Turkish community for next month's referendum to dramatically expand the powers of President Recep Tayyip Erdogan.

Authorities in Rotterdam denied permission for the rally on Friday, but Cavusoglu told CNN Turk before his departure on Saturday that he planned to fly to Rotterdam anyway.

"If my going will increase tensions, let it be," he told CNN Turk. "What damage will my going have on them? I am a foreign minister and I can go wherever I want."

Ankara would impose political and economic sanctions on the Netherlands if his plane was denied permission to land, Cavusoglu also said. He repeated earlier government statements that European governments were using "fascist practices" to prevent political rallies.

The Dutch government said it was trying to find a solution with Turkey, but after Cavusoglu threatened political sanctions it "makes the search for a reasonable solution impossible."

"For that reason the Netherlands has let it be known it will withdraw permission to land," it said.

Dutch Foreign Minister Bert Koenders on Thursday said his country would not cooperate or facilitate Turkish government campaigning in the Netherlands, causing a diplomatic spat similar to that between Berlin and Ankara.

Responding to the flight ban at a rally in Istanbul, Erdogan said the Dutch policies were reminiscent of the Nazis.

"They are the vestiges of the Nazis; they are fascists," Erdogan said. "Ban our foreign minister from flying however much you like, but from now on let's see how your flights will land in Turkey," he said, adding that any action would impact diplomats and not tourists.

"It's a crazy remark of course," Rutte told journalists while campaigning ahead of the country's March 15 election. "I understand they're angry, but this of course was way out of line."

"I think our democracy can withstand that!"

The Dutch decision to block landing permission is likely to escalate tensions between the two NATO allies. In response, Turkey summoned the Dutch charge d'affaires to the foreign ministry in Ankara.

The spat comes four days before elections in the Netherlands, where right-wing, anti-immigration politician Geert Wilders is running neck and neck with Prime Minister Rutte's party.

The April 16 referendum is a highly divisive issue in Turkey, where the government has likened those against expanded presidential powers to "terrorists" and coup plotters.

"Many Dutch people with a Turkish background are authorized to vote in the referendum over the Turkish constitution. The Dutch government does not have any protest against gatherings in our country to inform them about it," Rutte said on Facebook.

"But these gatherings may not contribute to tensions in our society and everyone who wants to hold a gathering is obliged to follow instructions of those in authority so that public order and safety can be guaranteed," Rutte added.

Earlier on CNN Turk, Cavusoglu accused Rutte and other European governments of playing populist politics ahead of elections.

The feud with the Netherlands reflects broader tensions between Turkey and Europe, especially with Germany, after several cities there blocked Turkish ministers from addressing rallies, citing security concerns.

A number of Turkish officials, including Erdogan, have accused Germany of Nazi and fascist-like behavior and double standards on freedom of speech and democracy.

The German government has indicated that it does not intend to introduce a top-down ban on rallies following a constitutional court decision on Friday finding the government can legally ban Turkish officials from campaigning in Germany.

On CNN Turk, Cavusoglu accused Europe of campaigning for a "No" vote in the referendum, suggesting the continent wanted to prevent Turkey from being "strong, stable and independent."

He claimed that German intelligence, the police and the outlawed Kurdistan Workers' Party (PKK) "threatened" the owners of event halls to cancel a scheduled rally in Hamburg.

The comments play into the Turkish government's efforts to stoke nationalist sentiment ahead of next month's referendum, which according to several polls is leaning towards a "No" vote.

If the constitutional amendments pass the referendum, it would be a "dangerous step backwards" for democracy, a panel of legal experts from the Council of Europe said on Friday.