Angela Merkel had a terse response to Turkish President Recep Tayyip Erdogan's accusation, leveled on Sunday, that she was using "Nazi" methods. The chancellor reiterated her position that the extreme language Erdogan has used with reference to both Germany and the Netherlands should cease.

"My statement that the Nazi comparisons from the Turkish side have to stop applies without ifs or buts," Merkel told reporters in Hanover.

Erdogan is angry that local authorities have prevented rallies in Germany in support of changes in the Turkish constitution that would give him enhanced powers. Campaign events have been refused permits because of concerns about the appropriateness of the venues, but Erdogan believes that Berlin is siding against him in the constitutional referendum to be held on April 16.

Merkel also cautioned that appearances by Turkish politicians on German soil could "only take place on the basis of the principles of German constitutional law." Some commentators view that as an indirect threat to Erdogan to curb his language. But opposition leaders protest that Germany needs a more vigorous response to Erdogan's remarks.

"We're facing a new level of escalation in German-Turkish relations," Left Party spokeswoman on foreign affairs Sevim Dagdelen said in a statement. "The government's lack of action encourages the Turkish president to engage in worse and worse attacks, scandalous Nazi comparisons and acts of repression against critics in Germany."

Dagdelen said Foreign Minister Sigmar Gabriel should summon the Turkish ambassador to Germany for a reprimand. The government, however, is taking a different tack. 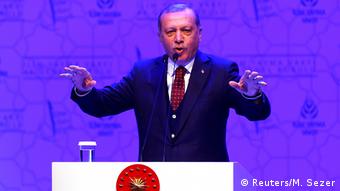 Erdogan's rhetoric has created a headache for the German government

At a meeting with Turkish-German entrepreneurs on Monday in Berlin, Gabriel said the situation with Ankara was "cause for concern," and earlier in the day, he told local newspapers that Erdogan had "gone too far." But he refused to be drawn into any further statements about the diplomatic row.

At the government's thrice-weekly press conference earlier in the day, a foreign ministry spokesman made it clear that Berlin's strategy is one of de-escalation. That's partly due to pragmatic concerns.

"The job of the foreign ministry is to strike a balance between the constraints of domestic policy and the necessities of foreign policy," spokesman Martin Schäfer said. "After the referendum, we're going to have to keep talking to the Turkish government. And we want to keep talking to them. We have common interests with Turkey, including the fight against the ["Islamic State"] terror organization."

Schäfer added that the government also wanted to avoid playing into Erdogan's hands by responding with equally heated rhetoric.

"We have to ask ourselves: Who benefits, if we answer with the same sort of language the Turkish president uses?" Schäfer said. "My answer would be: It benefits the Turkish president if we respond with insults and threats. It will help him to get the constitutional referendum on April 16 approved by a majority of Turks. Our impression is the harder we strike back, the more we fall victim to the tactics of the governing party in Turkey."

Critics of the constitutional referendum say that it would effectively end democracy in Turkey and give Erdogan autocratic powers. 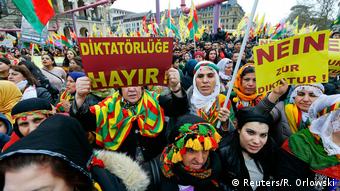 Erdogan has accused Germany of hypocrisy for banning events among his supporters while allowing a protest march by Turkish Kurds in Frankfurt over the weekend, at which symbols of the Kurdish separatist organization PKK were displayed. The PKK is banned in Germany as a terrorist organization.

Interior Ministry spokesman Tobias Plate acknowledged that PKK symbols had been displayed at Kurdish rallies in Germany, but said the responsibility in this area rested with Germany's 16 federal states and not the federal government.

"The federal government offers state authorities assistance in interpreting the law, but they form their own opinions," Plate said. "That answers the question about who was responsible for enforcing the ban on the PKK with reference to the demonstration in Frankfurt on the weekend. It was the state of Hesse."

Plate also suggested that those who displayed symbols of a forbidden organization could be prosecuted as individuals and that the presence of such symbols was not necessarily reason to ban a whole event.

"In general in Germany, people have a right to assemble," Plate said.

Such explanations are unlikely to mollify Erdogan. And events both for and against the proposed changes to the Turkish constitution in Germany are certain to come under even more scrutiny as the April 16 referendum deadline approaches.