Thousands of Kurds rallied against Turkey in Frankfurt. Turkey condemned the protest as a sign of Germany's support for "terrorism."

More than 30,000 Kurds marched through the streets of Frankfurt on Saturday calling for democracy in Turkey and a "no" vote in next month's referendum on dramatically expanding Turkish President Recep Tayyip Erdogan's powers.

Under the slogan "No to dictatorship - Yes to democracy and freedom," the rally was meant to mark the Kurdish New Year, or Newroz, traditionally celebrated on the first day of spring.

Protesters chanted "terrorist Erdogan" and "freedom for Ocalan," in reference to Abdullah Ocalan, the jailed leader of the Kurdistan Workers' Party (PKK), which has fought a three-decade-long war against the Turkish state for autonomy and greater rights.

Several hundred police officers were deployed at what they described as a peaceful rally. Police asked participants to stop displaying Ocalan flags, which were recently banned, and then announced they would make video recordings. They said no flags were confiscated in order to not provoke protesters.

"Europe should listen to us and help us," one Kurdish protester told DW at the rally. "The best way is to impose economic sanctions on Turkey." 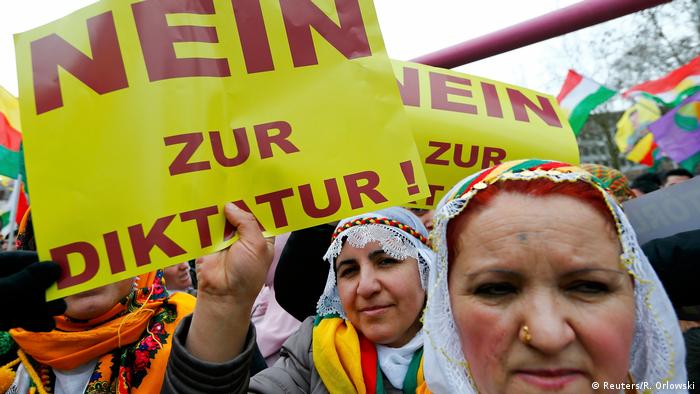 People held placards with the slogan 'No to dictatorship'

"We are afraid that the situation for the Kurds in Turkey will get worse and that we will face more problems," a man who did not want to give his name told DW. "That's why we're going on the streets today; we want to demonstrate for the Kurds and show what we think of the referendum."

Turkey condemned the German government, accusing it of allowing a terrorist group to hold a rally when Turkish ministers have been restricted from campaigning in several European countries for the April 16 referendum.

"Allowing a terror organization to protest and chant slogans about a referendum in our country while creating difficulties for parliamentarians to meet with the Turkish community constitutes a serious double standard," the Turkish Foreign Ministry said in a statement.

The PKK is designated as a terrorist group by Turkey, the European Union and the United States. It has been banned in Germany since 1993.

Turkey has repeatedly accused Germany of supporting the PKK, which has tens of thousands of followers across Europe. Berlin denies the charges and regularly prosecutes PKK operatives. 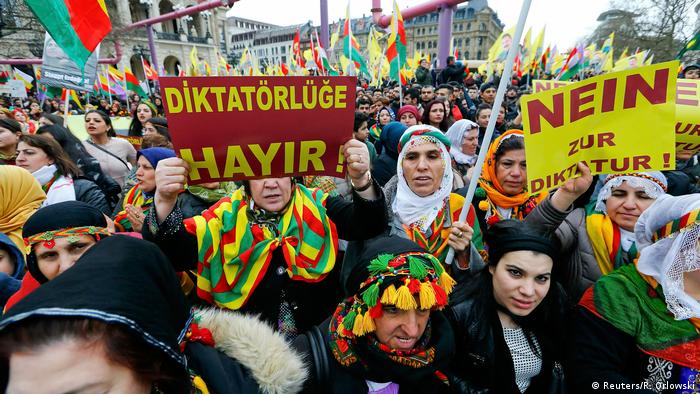 The protest is likely to further strain ties between Berlin and Ankara, already under pressure after several Turkish ministers have been blocked from campaigning in Germany for next month's referendum. Some 1.4 million Turks in Germany are eligible to vote in the referendum, including many Kurds.

Next month's referendum will be held under a state of emergency under which dozens of elected Kurdish mayors and 13 Kurdish lawmakers have been arrested. The Turkish opposition accuses the government of restricting campaigning for a "no" vote amid a media landscape dominated by pro-government mouthpieces.

Peace talks and a ceasefire between the PKK and the Turkish state collapsed in 2015, triggering some of the worst violence since the 1990s.

Earlier this month, a UN human rights body accused the Turkish military and police of killing hundreds of civilians, displacing more than a half a million people and carrying out torture, rape and extrajudicial killings in its prosecution of its renewed war against the PKK between July 2015 and the end of 2016.

The Turkish president has also said Europe is regressing to the pre-World War II era. German Chancellor Angel Merkel called for an end to the exchange of "insults." (17.03.2017)