Why many Turks in Germany voted ′yes′ in Erdogan′s referendum | Germany | News and in-depth reporting from Berlin and beyond | DW | 18.04.2017

Why many Turks in Germany voted 'yes' in Erdogan's referendum

Hundreds of thousands of expat Turkish citizens in Germany voted in favor of giving sweeping new powers to the office of the Turkish president. Many Germans, and Turks who voted "no," are taken aback. 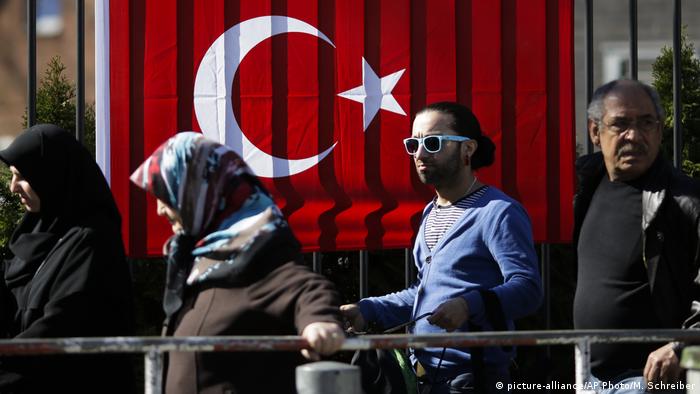 What happens following the 'yes' vote?

The referendum to change Turkey into an "executive presidential system" has passed with the narrowest of margins. DW examines the next steps in the transition period as the constitution undergoes an overhaul. (18.04.2017)

The German government has voiced concern over the narrow result of Turkey's referendum to expand the president's powers. Amid widening protests, analysts have warned that social unrest may spread following the vote. (18.04.2017)

More than 63 percent of the Turkish population in Germany cast "yes" votes in last Sunday's referendum on enhancing the power and scope Turkish presidency.

According to Yunus Ulusoy of the Essen-based Center for Turkey Studies and Integration Research (ZfTI,) the number of votes from Germany amounted to 0.23 percent of the total, where just over 51 percent of voters agreed to give current Turkish President Recep Tayyip Erdogan sweeping powers.

All the same, the percentage of "yes" votes by Turks living in Germany prompted Germany's mass-selling daily newspaper Bild to run with the headline "German population with Turkish roots helps Erdogan win."

Voter turnout of in Germany was about 49 percent - so all in all, less than half a million Turkish residents in Germany eligible to vote in the referendum supported President Erdogan's bid to end the country's current parliamentary political system.

Germany has a community of about three million residents with Turkish roots, roughly half of whom were entitled to vote in Sunday's referendum. 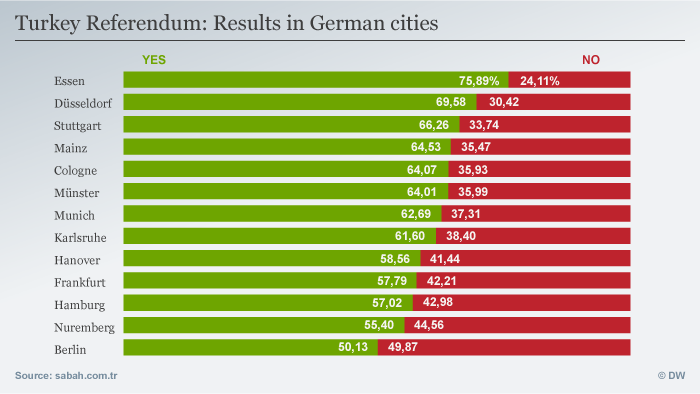 It wasn't exorbitant, but the expat Turkish vote has hit a nerve.

The head of Germany's Greens Party said on Tuesday that some Turkish citizens living in Germany seem to think they can "get away with touching the constitution with just the tips of their toes." To be happy in the long run in Germany, people have to completely accept the "values and constitution of our country," said 51-year-old Cem Öz­de­mir, himself of Turkish descent.

Germany is going to have to accept the fact that hundreds of thousands of Turks living in Germany are loyal to Germany on an "economic and social level," - but on a "political and ideological level, they are loyal to Er­do­gan," commented Christian Democratic (CDU) politician Wolf­gang Bos­bach.

Largely, their vote was a form of protest, said Detlef Pollack, a professor of sociology of religion at Münster University who has conducted extensive studies on the integration of Turks living in Germany.

"Older men in particular like the fact that someone is finally showing the West, the EU, how things should be; it's an expression of defiance, assertiveness and resentment," Pollack told DW, adding he was surprised that Turks living in Germany were prepared to give in to these feelings, so frivolously jeopardizing Turkey's democratic achievements.

Professor Pollack is convinced people want to preserve democracy in Turkey. On the other hand, he points out the existing conflict between Turkey and the EU, between a Christian and a predominantly Muslim society - "a conflict that overshadows political issues."

"It's difficult to cast a clear political vote because suddenly, questions of pride, nationality, identity and religion gain importance to a degree that political pragmatism takes a back seat."

Opposed to a 'one-man regime'

Concerned about a "one-man regime," the Turkish community in Germany said in various newspaper interviews that they would strive to find a way to better communicate with "Turks living in freedom in Germany but who desire an autocracy for Turks living in Turkey."

Thomas Kufen, mayor of the western German city of Essen, wonders why President Erdogan's policies are attractive to Turks living in Germany.

The answer, the mayor told German WDR radio, appears to be that in appealing directly to Turks in Germany, Erdogan treats them with the respect they miss in German society, and from German politicians.

The number of expat Turkish voters in his city who cast a "yes" ballot was 75 percent.