Many Turks living abroad are welcoming the result of a referendum that gives extended powers to President Erdogan. But some European politicians are mulling measures against those who approve authoritarian rule. 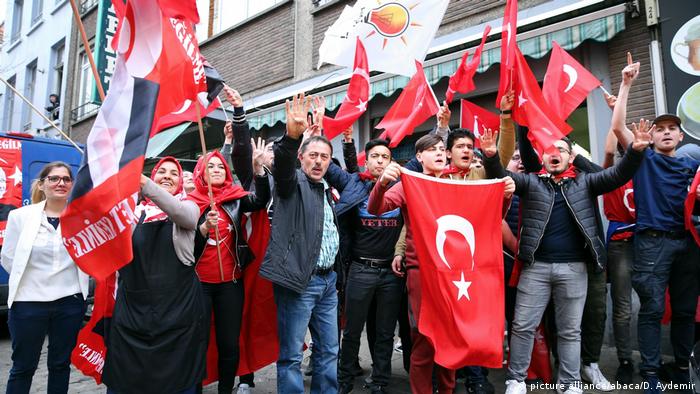 Expatriate Turkish voters have been taking to the streets of their adopted homelands to celebrate the "yes" vote approving constitutional changes to give Turkish President Recep Tayyip Erdogan more power.  While only 51.3 percent Turks who live in Turkey itself want more autocracy, those living outside the political limitations in their home country are more enthusiastic about the idea.

OSCE observers are casting doubt on whether Sunday's balloting met international standards for fairness, but the expat absentee vote ahead of time does appear to show clear divisions. According to figures posted by Turkish TV TRT World, Turks in Belgium voted for the proposal by the highest percentage in Europe, at almost 80 percent.  Austria was next, with more than 72 percent in favor, and the result in the Netherlands, where the government clashed with Erdogan last month to block pro-government rallies, was not far behind with almost 70% for "yes."

But this fervor for authoritarianism in Ankara may come at a high price for Belgians of Turkish descent, who are currently allowed to hold dual nationality and to vote in both countries.  As the huge Erdogan support played out in the polls, Flemish Christian parliamentarian Hendrik Bogaert told Belgium's Dutch-language broadcaster VRT that he wanted to make it illegal to hold two passports.  "We have learned a couple of things during the [Turkish] campaign," Bogaert said. "We wake up today with an autocratic regime next door. We can't just pretend nothing has happened."

Bogaert says dual nationality is "not good for integration" and that it leads to Belgians of different ethnicities being "more involved in foreign politics than in Belgian politics." Therefore, he proposes to do away with the right to dual nationality for anyone coming from outside the EU.

Responding to the suggestion on Twitter, Belgian State Secretary for Asylum and Migration Theo Francken agreed with Bogaert.  Asserting that EU members had the full right to reject dual nationality, Francken tweeted in English, "Let's do it."

Turks who are seeking political asylum in Belgium due to Erdogan's purge of the public sector and military watched the referendum results with different concerns.   For them, wanted in Ankara for suspected ties to last July's coup attempt, it means there's even less chance they'll ever be able to go home, with authoritarian rule more firmly cemented.

One former NATO military officer who must remain anonymous for his safety said the "situation of the Turks here [in Belgium] is even sadder," as broken-hearted as he was for his compatriots in Turkey as the results came in.

"These people were educated in Belgium!" he marvels. "If they still vote for a dictator, Belgium should question its policies twice."

Yet this officer told DW he opposed the Belgian proposal to cut off citizenship or voting rights because of their support for Erdogan.  "Nobody can be punished for his political thoughts or preferences," he said. "Then what is the difference between Erdogan and themselves?" 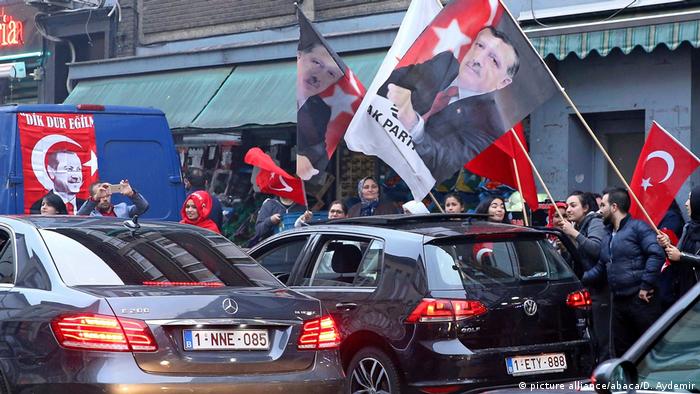 Many Turks took to the streets of Brussels to celebrate "yes"

He says the answer is to put more effort into educating Belgians of Turkish descent about the privileges and rights of living in Europe and trying to make them feel more Belgian.

"Kicking the Turks out of Europe means to become Erdogan in order to seek vengeance against Erdogan," he warned.

DW's editor-in-chief, Ines Pohl, argues a similar line, urging German politicians to do more - not less - to claim Turks living there as their own.  "If so many people living in Germany support a man who wants, among other things, to reintroduce the death penalty, then, all attempts at integration notwithstanding, things have gone very wrong somewhere," Pohl writes. "In order to draw the right conclusions, Germany must be honest with itself."

Pohl says Germany should state the "non-negotiable" facts about the need to follow the country's democratic constitution without stooping to the level of populists to foment insecurity.  " [O]nly Germany will be able to solve the problem with its own Erdogan followers," she concludes.

But for now the populists are having a field day with the referendum results. Many commentators are tweeting how the Turks who want Erdogan-style rule should be expelled to enjoy in it person.

But the former NATO officer urges European governments to act cautiously.  "Support in Europe for Erdogan is a result of failed integration and a low level of education," he says. "Therefore states should revisit policies to allow better integration and increased education levels. The dual citizenship debate should be viewed with this light, and should be used as an instrument of better integration rather than punishment."