Can hydropower withstand a future of extreme weather? | Environment | All topics from climate change to conservation | DW | 27.08.2021 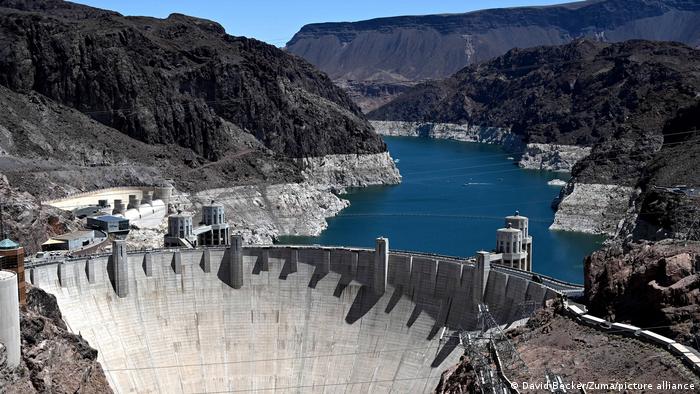 Hydropower is vulnerable to climate change

For many years, the thinking around the use of hydropower as a clean energy source has been that once built, a plant can reliably generate electricity at any time.  As recently as 2019, more than half the world's renewable electricity was generated from hydropower.

But as the climate changes, so does the potential of this water-powered source of energy. This year, droughts made more frequent and severe by rising temperatures have caused the biggest drops in hydropower generation recorded for decades.

At Lake Mead, not far from the US metropolis of Las Vegas, the Colorado River feeds the Hoover Dam, which supplies water to more than 140 million people in America. But right now, the vast reservoir is just one-third full.

Declining levels mean the dam's power plant produced 25% less electricity this July than would usually be the case. They have also prompted the US federal government to announce water cuts to towns downstream of the dam starting in January 2022.

In South America, it's a similar situation. The Parana River, which flows through Brazil, Paraguay and Argentina, is experiencing extremely low levels of water. Southern Brazil, where the Parana rises, has been in the grip of severe drought for three years. 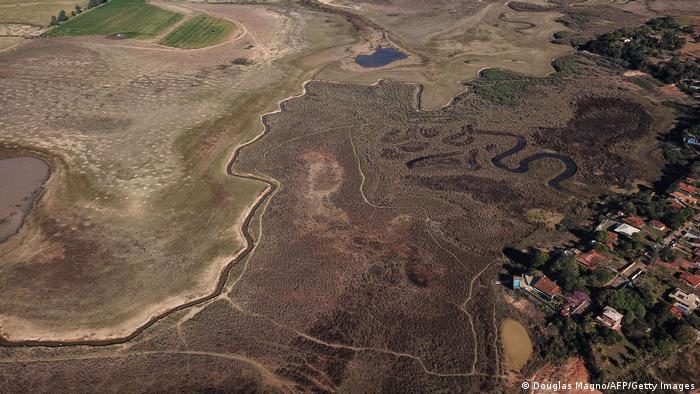 A severe water shortage at Lake Furnas in Brazil

According to local reports, levels in reservoirs in central and southern Brazil have dropped by more than half the average of the past 20 years, and are currently at just under a third of their capacity. As Brazil generates about 60% of its electricity from hydropower, continued low dam levels could lead to blackouts.

A return to fossil fuels

To prevent that from happening, Brazilian authorities have begun reactivating natural gas power plants, which is causing electricity prices, as well as greenhouse gas emissions, to rise.

A similar scenario is playing out back in the United States. In drought-ridden California, the state government has permitted industries and ships to use diesel generators for the electricity they cannot access from renewable sources. Natural gas power plants are also being permitted to burn more gas to generate electricity. 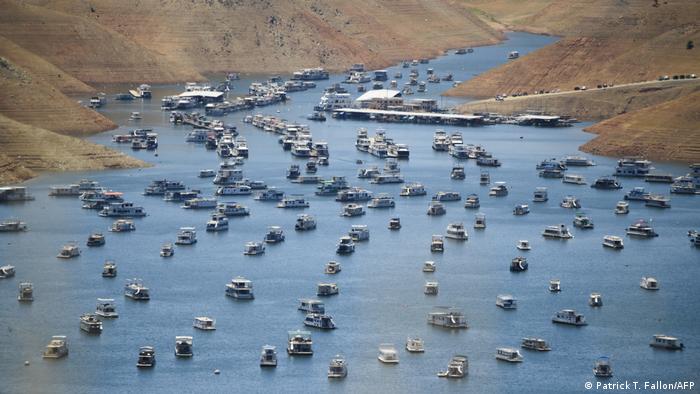 But it's not only drought that can cripple hydroelectric power generation. Heavy rain and flooding can also pose major problems. In March 2019, severe flooding following Cyclone Idai, which struck western Africa, damaged two major plants in Malawi, cutting off power to parts of the country for several days.

Hydropower on the way out in Africa?

In several African countries, including the Democratic Republic of Congo, Ethiopia, Malawi and Mozambique, hydropower accounts for more than 80% of electricity generation, according to theInternational Energy Agency (IEA). Overall, hydropower accounted for about 17% of electricity in Africa at the end of 2019. That figure is forecast to rise to more than 23% by 2040. 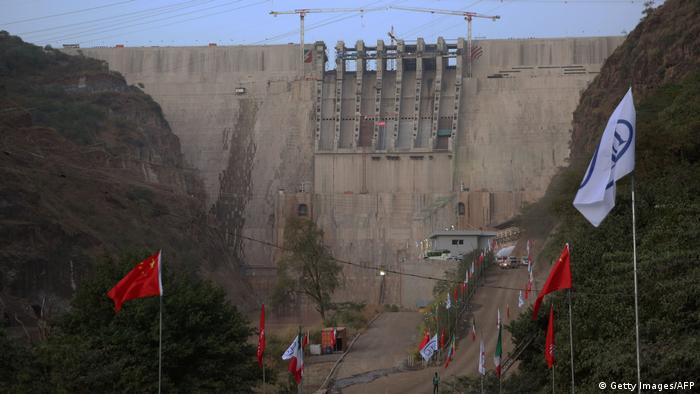 But according to the IEA, most new plans for hydropower plants in Africa do not adequately take into account the potential hazards of climate change, if they consider them at all.

Meanwhile, many hydropower plants already in operation around the world are facing another problem — aging. According to a United Nations University study, dams reach the end of their useful life 50 to 100 years after construction. The more these structures weather, the study notes, the more likely dam failure becomes.

From as early as 25-35 years into a dam's lifetime, the measures needed to maintain it significantly increase the operating costs, the authors said.

With that in mind, it would be disastrous to invest in more hydropower plants while phasing out fossil fuels, says Thilo Papacek from CounterCurrent, a German NGO that campaigns for socially and environmentally responsible foreign involvement from German organizations abroad.

Hydropower plants don't only interfere with the surrounding ecosystem, but because they prevent sediment from being carried downstream, they can also become hazards for people, Papacek told DW. 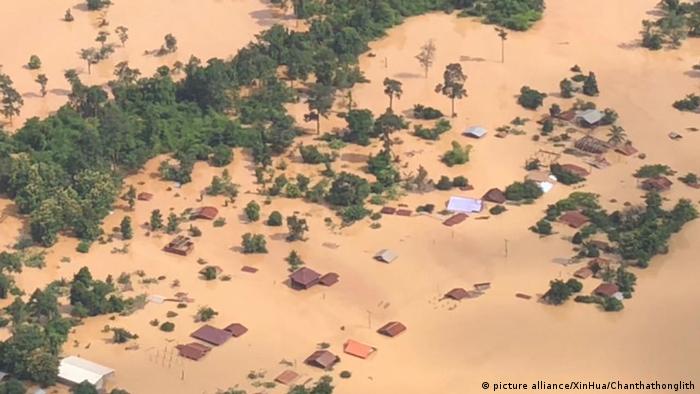 "Without sediment accumulation on the riverbanks, the river burrows deeper and narrower into the landscape behind the dam. It can then develop tremendous force during heavy rains, especially if water also has to be released from the reservoir," he said, adding that it increases the risk of flooding in nearby settlements.

"It's true that we won't be able to do without hydropower in the future," said Klement Tockner, director general of the Senckenberg Society for Nature Research and a professor of ecosystem science at Goethe University in Frankfurt.

He believes they should not be built in existing protected areas where there are still sufficient free-flowing rivers and says that where appropriate, measures should be put in place to offset the negative impacts of hydropower plants on ecosystems — such as the restoration of impaired waterways and the removal of dams. New plants need to be built in such a way that rivers are still as permeable as possible — both to let fish and sediment to travel up and downstream, and to allow the flow of large volumes of water during floods. 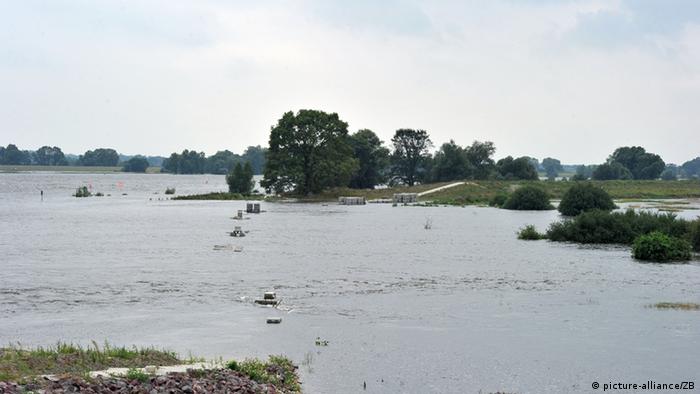 "That means the flow velocity must not be impacted too much, and the river must retain enough residual water as well as floodplains," explained Stefan Uhlenbrook, a hydrologist at the International Water Management Institute (IWMI). "If necessary, sediment must be mechanically returned to the river channel," he told DW. 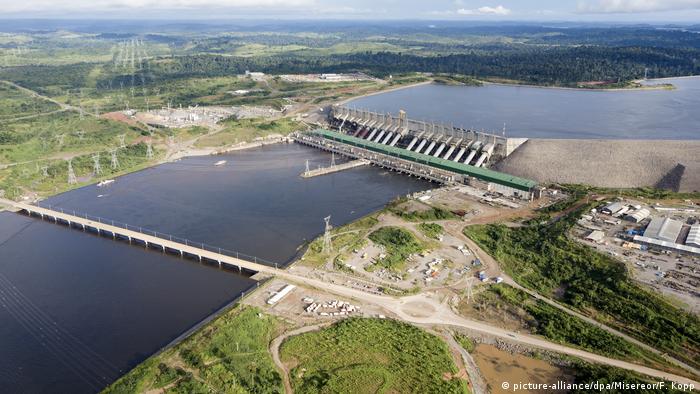 The Belo Monte dam in Brazil is one of the largest in the world, but the plant hardly ever reaches its peak capacity of 11,000 megawatts

He says large plants are likely to become increasingly ineffective due to climate change, and that the focus should be on smaller plants and a decentralized supply.

Technology alone is not enough

There are alternatives to mega-dams. Instream turbines, for example, are suspended in the middle of the river and generate electricity from the velocity of the flowing water. These don't require extensive construction work and can still operate when water levels dip. But while they are suitable for remote regions, they cannot supply metropolitan areas.

Hydropower at the expense of India's environment

Another example is the shaft hydropower plant, located at the Technical University of Munich (TUM), which was designed to accommodate for flood safety and longevity. A pilot plant in the southern German state of Bavaria supplies electricity to around 800 households.

"We can mitigate the effects of droughts by using the land differently," said ecosystem scientist Tockner. "Semi-natural forests and wetlands store a lot of water, which they then release during periods of drought — we have to look at how we can reduce both droughts and floods using nature-friendly measures."

But, he added, given the increase in extreme weather events, it's clear that "hydropower will no longer be a reliable source of energy to the same extent."

For hydrologist Uhlenbrook, there's another aspect in the energy debate that is often overlooked: "Above all, we must focus on saving as much energy as possible in the future."