Sturgeon are among the world's most threatened species. A new hydropower project threatens one of their last breeding grounds in Georgia's Rioni River. 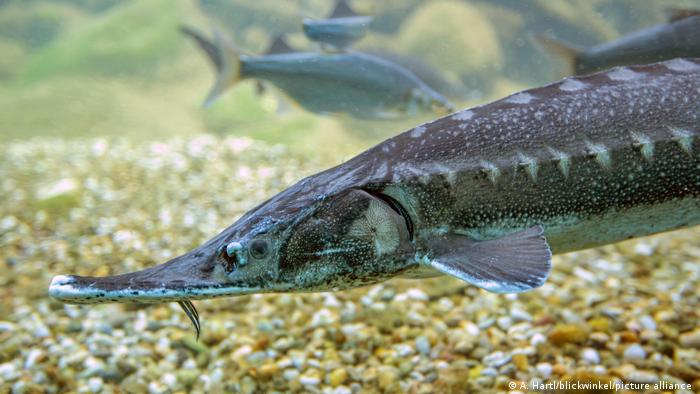 The stellate stugeon, one of the species still found in Gerogia's Rioni River

Since he was a child, 70-year-old Genadi Kaladze has been fishing the lower reaches of the Rioni River, where it meanders past his village of Akhalsopeli in the western lowlands of Georgia, before flowing into the Black Sea about 80 kilometers (about 50 miles) further west.

Last August he accidentally hooked a 4-kilogram sturgeon. He didn't take the fish home to eat. Instead, he photographed it and took a fin clipping, before releasing it back into the river.

Kaladze is taking part in Georgia's first sturgeon monitoring and conservation program, launched by conservation group Fauna and Flora International (FFI) in 2017. The data he provided allowed FFI to identify his catch as a Russian sturgeon.

"There were many sturgeons in my grandfather's time, but now they're very rare," Kaladze said. In those days, Kaladze said, sturgeons were found as far as Kutaisi, Georgia's second-largest city, 30 kilometers upstream. But today, a dam blocks their path.

Sturgeon have long been at risk of overfishing because their eggs — caviar — are one of the world's most expensive gastronomic delicacies. But today, conservationists say hydropower projects are the biggest threat to the survival of these ancient fish. 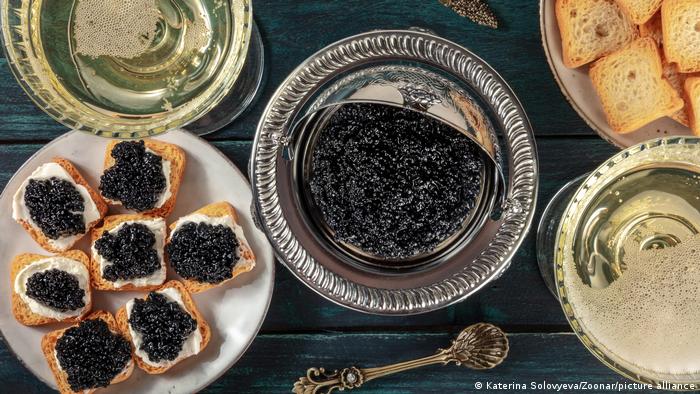 Caviar, the eggs that long made the sturgeon a profitable catch for fishermen

A rare haven for embattled sturgeon

Sturgeon swim upstream to lay eggs and spawn. Across Eurasia and North America, this breeding cycle has been disrupted by dams, leading to global population crashes. In 2010, the International Union for Conservation of Nature declared sturgeons "more critically endangered than any other group of species."

The last dam built on the Rioni — a few dozen kilometers above Kaladze's village — was completed in 1987. It was one of a great number of such constructions that went up during the Soviet era, and it blocked access to over 80% of the river's former sturgeon spawning grounds. 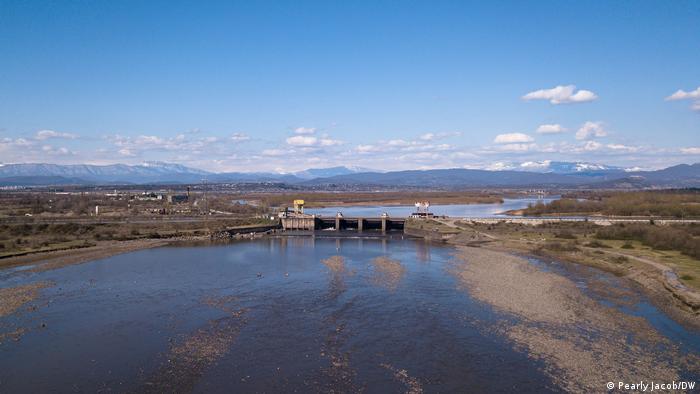 Yet the Rioni remains one of only two rivers in Europe where five different species of critically endangered sturgeons still reproduce. Last year, the ship sturgeon was thought to be extinct in the Black Sea region until fishermen caught eight juveniles in the Rioni. Beluga, stellate, Russian and Colchic sturgeons have also been recently recorded in the river.

"We can't find this assembly of species together anywhere else in the world," said Fleur Scheele, the Caucasus Program manager for FFI.

But this rare haven of biodiversity is under threat from a new, $800 million (€680 million) hydropower project that would entail two new dams on the Rioni of 105 meters and 59 meters.

Sturgeon rely on seasonal water fluctuations and temperature to time their migrations, which usually start when river volumes rise in spring as snow melts. Dams change the natural flow and volume of water, confusing the fish, Scheele explained. They also block the flow of nutrients that nourish young sturgeons and other aquatic life.

According to the World Sturgeon Conservation Society (WSCS), based in Germany, large hydropower projects have already led to the local extinction of sturgeon in several rivers in Turkey, Italy and parts of eastern Europe.

Conservations say the Namakhvani Hydropower Project could seal the same fate for the Rioni's sturgeon.

The project would also be a disaster for some human inhabitants of the riverine environment. The dams will flood three mountain villages, affecting close to 300 families, some of whom have refused compensation and resettlement and have instead been calling for the project to be scrapped. 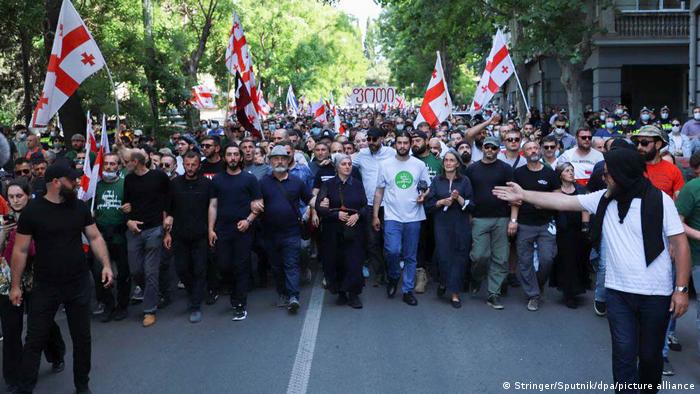 Other opponents to the dams say adequate social and environmental impact assessments have not been carried out, and seismological studies were not done to properly assess the safety of the dams. They fear an earthquake in the seismic-prone region could breach the dams and trigger floods that could hit Kutaisi, a city of around 150,000 people just 30 kilometers downstream.

Following demonstrations on the streets of Kutaisi and the Georgian capital of Tbilisi, the government finally agreed in June to a 12-month moratorium on the dam construction works to allow for EU-mediated talks with opponents of the project. 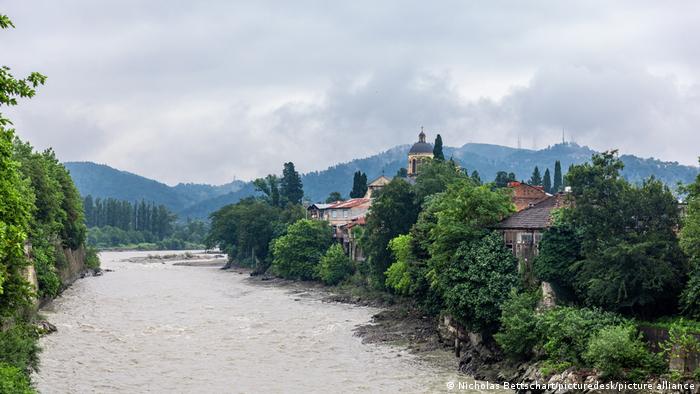 Some fear that the new dam could threaten Kutaisi, Georgia's third largest city

Not all renewables are a green solution

Georgia's first hydropower plants were constructed in the 1920s, and today hydropower accounts for more than 80% of electricity generated in the country. That means Georgia is far less dependent on climate-harming fossil fuels than central and eastern European countries like Poland or Germany. 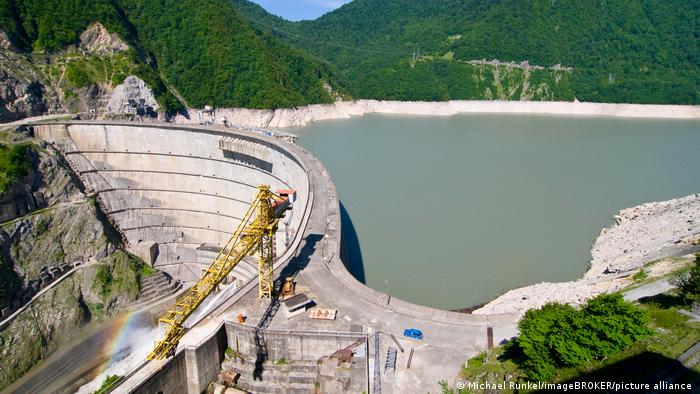 Yet Dato Chipashvili of Green Alternative, an environmental organization based in Tbilisi, said with studies linking hydropower dams to greenhouse gas emissions in countries like the US, as well as the risks to biodiversity, hydropower isn't the answer to mitigating climate change.

Although there have been no studies to show whether hydropower dams in Georgia and its neighbors are similarly damaging to the climate, Chipashvili said the country needs to diversify its energy supply. As hydropower dominates the renewables sector in Georgia, there has been a dearth of development of other green energy sources.

The country has just one, 21-megawatt, wind farm, built in 2016, despite having recognized the potential for an installed capacity of 1500MW of wind farms in its renewable energy action plan. Meanwhile, 187 memorandums for hydropower plants have been signed since 2008.

Chipashvili said environmental impact assessments (EIA) for such projects are usually done only after these agreements are signed and serve to justify the projects rather than determine their feasibility.

In the case of Namakhvani, the contract was with Enka Renewables was signed seven months before the company handed in its EIA.

Last hope for an ancient species?

Although it is the human rights and social impacts of the damn — rather than their cost to biodiversity — that has temporarily halted the project, conservationists are demanding the Georgian government consider the sturgeon and proceed with "extreme caution," in the words of the WSCS, which wrote a letter reminding the Georgian government of its commitment to the Bern Convention on conservation of European Wildlife and Natural habitat in 2009 as well as the Action Plan for the Protection and Restoration of the European Sturgeon

and the Pan-European Action Plan for Sturgeons. 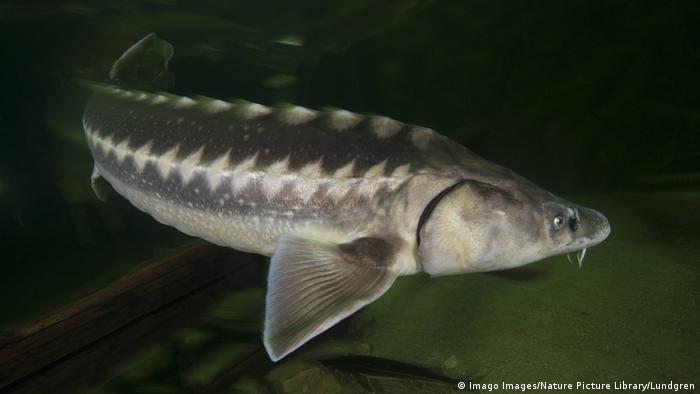 The Russian sturgeon, an ancient fish, is still holding on in Georgian rivers

These treaties oblige Georgia to protect and restore the habitats of endangered wildlife like sturgeons in rivers where they are still actively reproducing. And from that perspective the Rioni is vital.

"The river has been heavily destroyed and there's hardly any fish left," said Scheele. "If you want to protect these last few specimens in the river, you really cannot do more harm to the river."