At least 200,000 people have taken to the streets of Romania's capital and other towns to protest against the government for decriminalizing some official misconduct. It was the largest mobilisation since 1989.

The number of protesters in the capital Bucharest on Wednesday night was put at 130,000 to 150,000 outside the cabinet building while riot police estimated a further 100,000 to 150,000 had joined similar rallies in 55 other towns and cities across the east European country.

As they walked the protesters shouted "thieves, thieves!" and condemned the government's emergency ordinance decreed the previous night. It decriminalizes the theft of public funds when the amount involved is less than 200,000 lei ($47,800, 44,000 euros).

Liviu Dragnea, the leader of the ruling Social Democratic Party, is on trial for diverting a sum just short of that limit. He has been accused of using his political influence to secure state salaries for two people working at his party headquarters between 2006 and 2013. Dragnea denies the charges. "I don't understand what the protesters are upset about," he told reporters on Tuesday. Dragnea is already barred from office because of a two-year suspended jail sentence for voter fraud handed down last year.

"Repeal it, then leave," protesters shouted on the rallies, as many of them waved Romanian national flags.

The Superior Magistrates' Council (CSM), earlier in the day filed a constitutional court challenge to the decree. The ordinance is being seen as the biggest retreat on reforms since Romania joined the European Union in 2007.

In protest, Florin Jianu, the minister of business, trade and entrepreneurship announced on Thursday he was resigning, saying it was the "ethical thing to do."

The Embassies of Germany, the US, Canada, France, the Netherlands and Belgium issued a joint statement saying the new measure "undermined Romania's progress on rule of law and the fight against corruption over the past 10 years." The embassies said the government should "reverse this unhelpful course."

"The fight against corruption needs to be advanced, not undone," President of the European Commission Jean-Claude Juncker and his deputy said in a statement. "We are following the latest
developments in Romania with great concern." 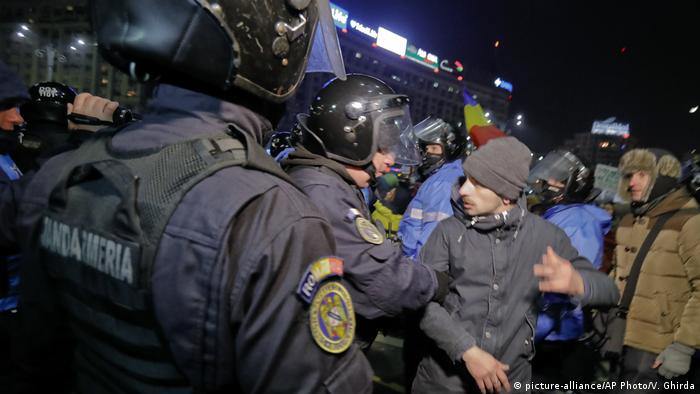 The Social Democrats only won power back in a December 2016 election, a year after protesters drove them from office after a deadly fire at a nightclub which had been blamed on corruption and impunity. Some 2,000 abuse of power cases are under investigation by anti-corruption prosecutors.

However, the Social Democrats returned to government promising to end the anticorruption campaign with a populist message of social welfare and limits on migrants. The rural vote turn out restored the party to office.

The government of Prime Minister Sorin Grindeanu on Tuesday also approved a draft bill that would grant prison pardons which it said would bring the criminal code in line with recent constitutional court rulings and ease prison overcrowding.

Tens of thousands of Romanians have protested a government plan to decriminalize abuse of power crimes and grant pardons to some convicts. Justice Minister Florin Lordache is to hold public consultations on Monday. (29.01.2017)

Romania's new premier has vowed to raise the minimum wage, create infrastructure and discourage emigration. But the opposition has claimed the government will be unable to govern in "a European way." (04.01.2017)

More than 200,000 Romanians took part in an anti-corruption demonstration late on Wednesday. It was the biggest protest in the country since the fall of communism in Romania in 1989. (02.02.2017)