The agreement, signed by 16 states and organizations, also set out plans for international efforts to monitor the implementation of the restrictions after failed efforts to implement the embargo for almost a decade but without much success in the conflict-blighted country.

German Chancellor Angela Merkel endorsed the declaration as she said: "We agreed on a comprehensive plan forward. I can say that all participants worked really constructively together."

"We all agree that we should respect the arms embargo, and that it should be controlled more strongly than it has been in the past," she said.

She added that the leaders who attended the summit had agreed to continue to hold additional meetings to ensure the process continues so that "the people in Libya get their right to a peaceful life."

The head of Libya's UN-recognized Government of National Accord (GNA), Prime Minister Fayez Sarraj, and Khalifa Haftar, the commander of the self-styled Libyan National Army (LNA), were both in Berlin but refused to sit or meet with each other as tensions remained between the two parties.

Chancellor Merkel and German Foreign Minister Heiko Maas held talks with the heads of Libya's warring sides separately prior to the conference getting underway but when asked whether Sarraj and Haftar were part of the discussions at the summit, Merkel said: "We spoke with them individually because the differences between them are so great that they aren't speaking with each other at the moment."

"I hope the commitments made today will contribute to a lasting solution to the Libya crisis. We need to have a ceasefire. We cannot monitor something that doesn't exist," Guterres said. "We have a truce."

A joint statement by the European Commission President Ursula von der Leyen and Vice President Josep Borrell said: "The participants have committed themselves to refrain from any measures and further military support to the parties that would endanger truce. This is an important step forward."

"Only a Libyan-led and Libyan-owned political process can end the conflict and bring lasting peace," the statement added.

Russian Foreign Minister Sergey Lavrov cautiously welcomed the progress made at the conference as he declared the summit a "small step forward." US Secretary of State Mike Pompeo described Sunday's developments as "productive."

"In a nutshell: Everyone but the warring factions have agreed on a ceasefire," she summarized, but also said the conference showed "a clear undercurrent that Haftar's supporters, namely Russia, have agreed to exercise some pressure."

Küfner said the day's proceedings left "less room for maneuver for General Haftar if he wants to remain the strongman in Libya, who is after all, also depending on at least being tolerated by major international powers."

Just hours before the conference began, the head of the UN-backed Libyan government questioned his rival's agenda.

"Long experience makes us doubt the intentions, seriousness and commitment of the other side, whom everyone knows seeks powers at any price," Sarraj told news agency DPA.

Haftar's forces have been battling to seize the capital, Tripoli, from Sarraj's government since last April.

Sunday's conference in Berlin comes on the heels of similar talks in Moscow last Tuesday, which did not yield significant progress. Haftar ended up leaving Russia without signing a permanent ceasefire deal proposed by Russia and Turkey.

"It's too early to judge whether this was a turning point for Libya, DW's Michaela Küfner says, "but the fact that it did take place added some credibility to Europeans doing international diplomacy," particularly in light of the near-failure of the Iran nuclear deal following the US's unilateral withdrawal. 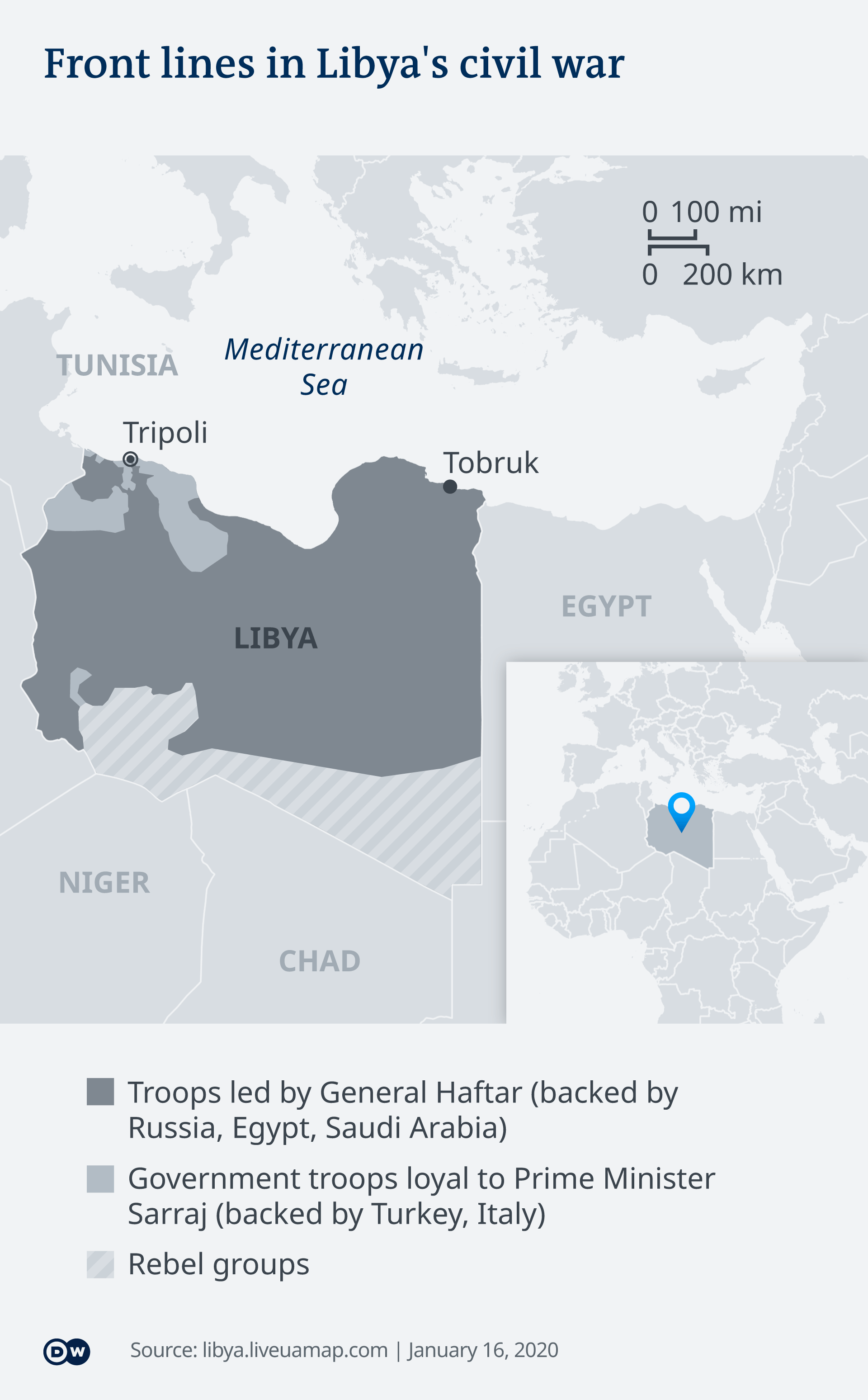 German Chancellor Angela Merkel invited the leaders from 12 countries as well as the United Nations, the European Union, the African Union and the Arab League to the summit at the Chancellery.

Earlier Sunday, certain parts of Berlin were on lockdown as access to the Pariser Platz at the Brandenburg Gate was restricted.

Around 150 people met in front of the parliament in Berlin to vent their anger towards Libya's military general. "Haftar kills Libyan children," were the words on one placard held by a protester.

Leaders stake their claims ahead of Libya summit in Berlin

Leaders and top government officials are due to meet in Berlin on Sunday to discuss a solution to Libya's complex civil war. As expectations build, politicians spoke out about their hopes for the summit. (19.01.2020)

The national oil company says crude output will drop by two-thirds and warned the militants were costing the Libyan people $55 million a day. The blockade came on the eve of a major peace conference in Berlin. (18.01.2020)