Germany: Silent mediator of peace efforts around the world | Germany | News and in-depth reporting from Berlin and beyond | DW | 19.01.2020 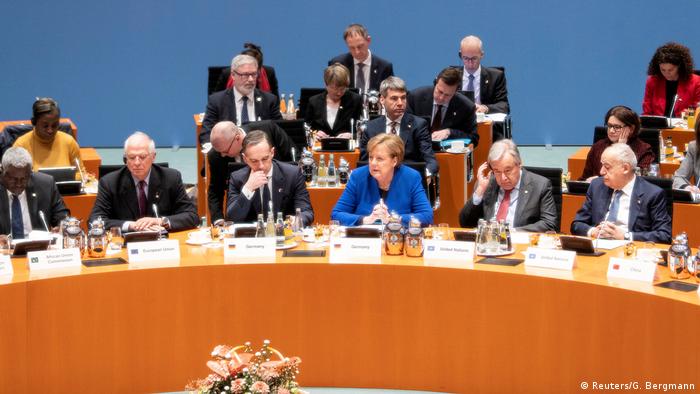 High-level heads of state and government met in Berlin — among them Russia's Vladimir Putin, Turkey's Recep Tayyip Erdogan and France's Emmanuel Macron. Traffic was disrupted, security was tight: Germany's effort to kick-start a peace process in Libya was a massive undertaking.

In previous efforts — peace process negotiations in, for example, Somalia, Colombia and Tunisia — Germany has preferred a more "silent" approach. Those efforts did not make great waves, but that was the nature of German peace diplomacy, according to Conrad Schetter of the Bonn-based International Center for Conversion, which focuses on peace and conflict research. "Behaving like a very strong mediator is uncharted territory for Germany. Traditionally, it prefers safer ways, acting jointly with others," he told DW.

Schetter said Berlin has often been a venue for such background talks. "[The goal was for] political actors to remain in contact with each other. Coming up with an attention-grabbing, glitzy policy was not the main point," he said.

This approach had its roots in Germany's past. After two world wars, Germany for a long time shied away from a prominent role in conflict mediation. "This, however, is changing gradually, because international advisers have increasingly called on Germany to get more involved," said Schetter. And Germany is slowly accepting a more powerful role on the world stage.

There are two conflict regions where Germany has already been active behind closed doors: Afghanistan and Ukraine. In both cases, Germany has acted in public as a mediator between the warring parties, hosted conferences and — in the case of Afghanistan — underpinned its efforts with a military presence in that country. Although Germany has begun to adopt a more active role, it still adheres to the basic principles of its peace diplomacy in these two regions.

One of those principles: Don't go it alone. In all its peace negotiations, Germany has remained in close consultation with other involved countries and organizations like the United Nations. A prime example is the first Afghanistan conference in 2001, shortly after the Taliban regime was brought down: the conference was initiated by the UN, with Germany welcoming leaders to talks in Bonn.

Read more: Why is Germany putting an Afghan man on trial for war crimes?

From the outset, however, Germany adopted a role which went far beyond that of host. Gerhard Schröder, then chancellor, personally committed himself to arriving at an agreement. Berlin pledged comprehensive financial and military aid, and in the ensuing years Germany remained a close partner to Afghanistan, helping to set up democratic structures and hosting a number of other conferences.

In 2005, the German Council on Foreign Relations said Germany's commitment to Afghanistan had shown that Berlin was ready to accept international responsibility. Afghanistan had provided a chance for Germany "to show it was available to act as crisis manager also beyond Europe's borders."

This role as a "crisis manager" is still in demand to this day. Just a few months back, Germany hosted an intra-Afghan dialogue conference jointly with Qatar in the emirate's capital, Doha. Although participants were present as private individuals only, not in their official capacities, and published a statement of intent that was non-binding, they announced at least that they would try to prevent violence against civilians and keep up the dialogue.

Dialogue is the second cornerstone of Germany's peace diplomacy. "Germany has always made strong efforts to understand the positions of all conflict parties, to get them on board in order to keep up the talks," said Schetter. That has also been evident in the ongoing conflict in eastern Ukraine.

Since 2014, the region has been locked in an ongoing conflict between armed groups supported by Russia and Ukrainian forces. From the outset, Germany has actively pushed for peace, and in doing so has made use of its good relations with Moscow. In 2015, the Süddeutsche Zeitung daily newspaper even spoke of the "permanent telephone diplomacy" between Chancellor Angela Merkel and the Russian president.

On an official level, Germany cooperates closely with France when it comes to the Ukrainian conflict. Paris has repeatedly hosted conferences, the most recent taking place in December after three years without meaningful talks. However, it's primarily the meetings in the so-called Normandy format — talks between representatives of Germany, France, Ukraine and Russia — where Germany's peace policy has manifested itself.

Following Afghanistan and Ukraine, the focus of German diplomacy is now on Libya. In Berlin, the aim will be to find common principles which could lead the way toward a peace process. It will be a huge, elaborately staged project, said Hans-Georg Ehrhart of the Institute for Peace Research and Security Policy at the University of Hamburg.

Sunday's meeting has been coordinated with Germany's partners, and diplomats from all sides have been preparing for weeks, Ehrhart said. With respect to the reasons behind Germany's commitment to the talks, he highlighted a multilateral context: Since the beginning of 2019, Germany has been a non-permanent member of the UN Security Council.

The recent Libya peace talks in Moscow were a failure. A new attempt is scheduled to take place in Berlin. The situation is complicated: All parties involved have their own interests at heart. (15.01.2020)