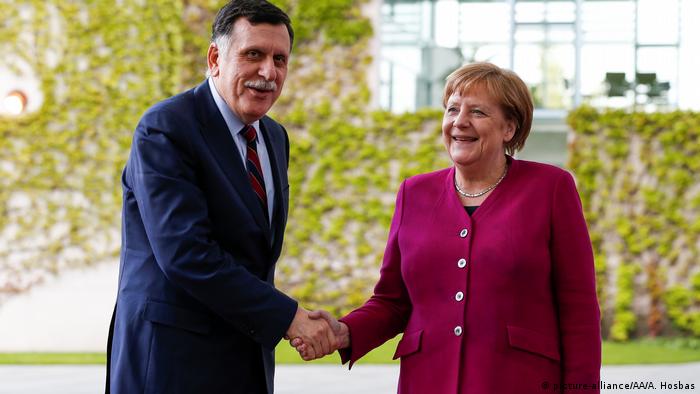 Angela Merkel and Libya's Fayez al-Sarraj in May 2019

A German-led push to resolve the conflict in Libya should see Libyan warlord Khalifa Haftar and the leader of the UN-backed government, Fayez al-Sarraj, attend a conference in Berlin this Sunday, the German government said on Tuesday.

They are to be joined by envoys from the US, Russia, China, the UK, France, Italy, the EU and the UN. German Chancellor Angela Merkel also extended an invitation to the African Union, the Arab League, as well the Republic of Congo, Algeria, Egypt, the United Arab Emirates and Turkey.

"With the aim of supporting the work of UN Secretary-General Antonio Guterres and the UN special envoy, Ghassan Salame, towards a sovereign Libya and a reconciliation process, Chancellor Merkel is extending invitations for a Libya conference in Berlin on Sunday," German government spokesman Steffen Seibert said on Twitter.

Berlin noted they were expecting top-level officials, such as prime ministers and heads of state. Several meetings of high-level officials have already been held in Berlin during recent months, the government officials said in the Tuesday statement.

The news comes just hours after Haftar left peace talks in Moscow without signing an agreement. Haftar is the leader of the Libyan National Army (LNA) and allied with one of the rival administrations in Libya, which is based in the east of the country. His forces have been engaged in a monthslong push to take control of the Libyan capital, Tripoli, where the UN-backed Government of National Accord (GNA) still holds sway.

GNA Prime Minister Al-Sarraj had allegedly signed off on the deal rejected by Haftar.

Germany supports the plan of UN envoy Salame to restart the political process in Libya. The plan includes a humanitarian truce, a high-level international conference, and then talks among Libyan warring parties.

Berlin has been trying to meditate between members of the international community but has no direct military involvement in Libya and there is no direct cooperation with either of the warring parties, says Middle East and North Africa expert Tim Eaton.

"And, frankly, Germany has been unable to bridge the gap between even its European allies, some of whom are seeking eventually the victory of Haftar over his opponents and others who are more critical of his ability to win and are more supportive of the GNA," said Eaton, who is a senior research fellow at the Middle East and North Africa Program at Chatham House in London.

"So if what we've seen to date is any indication, Germany isn't going to be able to dictate those terms," Eaton told DW.

Fear of another Syria

International observers worry that the fighting in Libya could escalate to the level of the catastrophic civil war in Syria, with numerous regional players protecting conflicting interests in the oil-rich North African country. Haftar is believed to enjoy at least some level of support from France, Egypt and the United Arab Emirates. Russian mercenaries are reportedly fighting alongside his troops.

In turn, Turkey has recently deployed troops to Libya to protect the Tripoli government. Qatar and Italy are also seen as allies of the GNA.

Under immense international pressure, Haftar agreed to a ceasefire in his push towards Tripoli this weekend, but both his troops and the GNA forces soon accused each other of violating the truce. After Haftar left peace talks in Moscow, Turkish strongman Recep Tayyip Erdogan said the Turkish army would "not hesitate to teach a deserved lesson to the putschist Haftar" if he pressed on with the Tripoli offensive.

War-torn Libya is already a key transit country for migrants, and several German politicians have warned that further escalation could send another large wave of refugees towards the EU.