US-Taliban talks: DW reporters′ firsthand account from Doha | Asia | An in-depth look at news from across the continent | DW | 30.08.2019

Journalists are eagerly awaiting a breakthrough in the US-Taliban talks in Doha, Qatar as the two sides continue to iron out details of a deal. But reporters are faced with difficult conditions in getting the truth out. 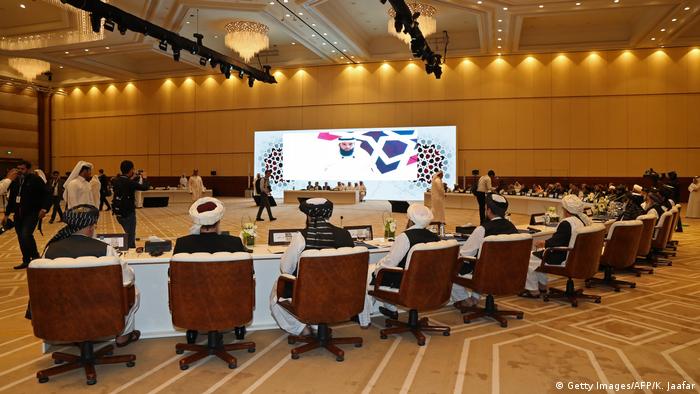 In Qatar, foreign reporters are required to comply with a number of rules and regulations that limit their journalistic coverage. Although DW managed to get permission to cover the ongoing US-Taliban talks in the capital Doha, we were not allowed to relay anything live from the city — apart from a pre-recorded Skype report presented as live — partly because the paperwork takes a long time.

The US-Taliban negotiations  are also a complex affair to deal with journalistically. It's the ninth round of bilateral talks between the two sides, and aims to end the 18-year-long violent conflict in Afghanistan. The Afghan government is not involved — yet — but if a deal is finalized this time around, there could be an intra-Afghan dialogue between the insurgents and government officials.

So, is a US-Taliban deal imminent? It's unclear at the moment. DW was told that US and Taliban representatives are discussing the minor details of a potential agreement. These details, we've been told, are crucial to avoid any political and legal confusion in the future. So a deal could be finalized at any moment, but a formal announcement seems unlikely at this point in time. And there is a possibility that the talks will collapse.

US President Donald Trump, who has said several times that he wants to end the Afghan conflict, recently remarked that he won't pull out all US troops from Afghanistan even if a deal with the Taliban is signed. This statement can only complicate matters and prolong talks. It could also mean that the US' self-imposed September 1 deadline to strike a deal could be missed.

Read more: US to reduce troops in Afghanistan by 5,000

As if the Gulf conditions were not a big enough hindrance for international journalists, the negotiation's venue is also a reporter's nightmare.

Journalists are not allowed to interview anyone inside the venue. They are also not allowed to take photographs. There is a very limited flow of information from the Taliban and US officials to reporters. They may get some hints here and there, and there is a lot to speculate about on just what is happening inside the conference halls.

These conditions, at times, may mislead journalists. Incorrect information has thus gone out to the media. For instance, at the start of the ninth round of talks, some Afghan media outlets claimed that a deal has been sealed, which, of course, is not the case.

Some foreign reporters told DW that they were not even allowed inside the building at the start of the current talks, although things have been easier in comparison to previous rounds. Restrictions started to ease slightly as the negotiations progressed. Now journalists can sit in an assigned coffee room, use their laptops and phones, and are also served food and drinks.

Journalists can also interact with Taliban and US representatives, but only during short breaks, and only when they come out of the conference rooms. No one gives out much information about the ongoing discussions though. Interactions are always very short, as the security officials are strict about the rules.

The US-Taliban talks are long and intense. They usually start around noon and continue until three or four in the morning. This means that reporters waiting for news also have to stay at the venue for 15, 16 hours. They can't leave as they don't want to miss out on any information.

Zalmay Khalilzad, the US special envoy for Afghan peace talks, was set to travel to Kabul to discuss a final US-Taliban deal with Afghan President Ashraf Ghani and his government officials. Journalists were told that he would leave on Wednesday, but his visit was postponed, probably because the deal needed more work.

The withdrawal of US troops is another issue that requires intense negotiations. Taliban members said they don't expect Washington to pull out all their soldiers in the first phase, but there could be another withdrawal depending on a post-deal situation in Afghanistan.

The release of Taliban prisoners is also a major topic. A list of prisoners, who will be released as a result of a deal, is being discussed. It has not yet been confirmed whether Anas Haqqani, the incarcerated Haqqani Network member, is on it. In recent years, the US has been particularly critical of the Pakistan-based network, which Washington and Kabul say targets international and local troops stationed in Afghanistan. The militant group is closely aligned to the Taliban.

One of the major US demands from the Taliban is that, as a counterterrorism measure, the insurgents pledge to cease attacks on US troops and also expel foreign militants that could harm US interests from the areas under the Taliban control.

The Trump administration also wants the insurgents to stick to the agreement conditions after a deal, which includes the Taliban holding talks with the Afghan government and imposing a countrywide ceasefire. Washington has made clear that a violation of these conditions could force it to keep the remaining troops inside Afghanistan.

We also have to keep in mind that both negotiating teams consult and report to their leaderships on a daily basis — Taliban members to their commanders, and US representatives to Washington.

Also, any final agreement will have to go through President Trump. This has the potential to be unpredictable. And Afghan President Ghani could also reject the deal, as he is pushing for a presidential election in September.

"Islamic State" has claimed responsibility for the Kabul attack that killed at least 63 people. Experts say that IS is giving a show of force, as the Taliban are busy holding talks with the US. (19.08.2019)