Afghanistan: Is ′Islamic State′ taking advantage of US-Taliban peace talks? | Asia | An in-depth look at news from across the continent | DW | 19.08.2019

"Islamic State" has claimed responsibility for the Kabul attack that killed at least 63 people. Experts say that IS is giving a show of force, as the Taliban are busy holding talks with the US. 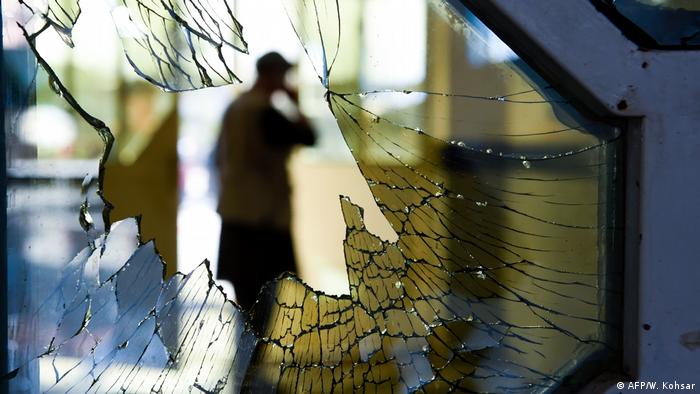 Saturday's suicide attack at a wedding hall in Kabul killed at least 63 people and wounded more than 200. A group affiliated with the militant organization "Islamic State" (IS) claimed responsibility for the bombing.

The wedding was believed to be a Hazara-Shiite gathering. Shiite Muslims are frequently targeted in Sunni-majority Afghanistan, and neighboring Pakistan, by hardline Sunni outfits, including IS.

"Nothing is safe in our country. They have been targeting our schools, our sports clubs, and now they are bombing our wedding halls also," the groom's brother-in-law, who witnessed the attack, told DW.

The attack sparked widespread outrage in the war-ravaged country. On Monday, Afghan President Ashraf Ghani vowed to "eliminate" all IS safe havens.

But security analysts say that IS is certainly gaining strength in Afghanistan and is likely to bring more Taliban fighters into its fold. A number of Taliban jihadists are reportedly unhappy with their leadership's ongoing peace negotiations with the US in Doha, Qatar.

However, the Taliban condemned the IS-claimed attack and denied any involvement.

IS in Afghanistan is mainly composed of former Pakistani Taliban fighters, who declared their allegiance to Abu Bakr al-Baghadadi, the IS leader.

The Taliban and IS have engaged in intense fighting since the latter first emerged in Afghanistan in late 2014, and successfully established a chapter in the eastern part of the war-torn country in January 2015.

Both the Taliban and IS oppose the government in Kabul. But they are deeply divided over leadership, ideology and tactics. Their brutal conflict, however, is for the most part rooted in their quest for control over territory.

The Taliban — a much stronger armed group in comparison to IS in Afghanistan — view themselves as the main Islamist opposition group in the country. Their stated aim is to overthrow the Western-backed government in Kabul and impose a harsh form of Islamic rule.

IS, on the other hand, aims to turn Afghanistan into its South Asian base and expand its presence to other countries in the region. "It is due to such differences and very brutal acts by IS, that the Taliban are favored as an armed opposition compared to IS," said Yonus Fakur, a Kabul-based Afghan political analyst.

The wedding hall attack on Saturday was not the first time that IS targeted Afghan Shiites. Afghanistan's Shiite minority witnessed several attacks in 2017 and 2018. Hundreds of people have been killed in attacks on their mosques and religious ceremonies.

"IS is facing a huge challenge from the Taliban, who are a potent militant force in the country," Muzhdah told DW.

"To establish itself in Afghanistan, IS needs support from local extremist Sunni groups. IS is targeting Shiites to distinguish itself from the Taliban," Muzhdah added.

Afghan security experts fear IS could divide the country along sectarian lines. Muzhdah, however, believes it won't be an easy task for the jihadist group.

"After each IS attack on Afghan Shiites, religious leaders from all Islamic sects have come forward in support of the victims," he said. "But if the government doesn't do anything to stop such attacks, the sectarian split could deepen," Muzhdah warned.

From the Middle East to South Asia

The IS focus on Afghanistan was quite inevitable after the group suffered heavy losses in Syria and Iraq in 2017. After the IS defeat in Iraq, experts had warned that a large number of its fighters could move into Afghanistan and Pakistan from the Middle East.

"As a result of setbacks in Iraq and Syria, we will most likely experience a major influx of IS fighters into Afghanistan and Pakistan looking for new areas of operations," Siegfried O. Wolf, a South Asia expert at the University of Heidelberg, told DW.

IS presence in Afghanistan is no longer confined to Nangarhar province. According to reports, the group has increased activities in other parts of Afghanistan as well, including the relatively safe northern regions.

IS, or IS-linked attacks, have also spiked in Pakistan. Experts say the group could get support from Pakistan-based militant outfits that are against Shiites and the Iranian influence in their country.

Afghan authorities have repeatedly accused Islamabad of supporting the Taliban, and other militant groups, and sending them into Afghanistan to destabilize the government.

Experts say that although Pakistan does not consider IS an ally, or a group which can fulfill its strategic interests in the region, things could change in the future as the hardline Saudi Wahhabi ideology could emerge as a unifying factor.

What is the significance of Khorasan for the jihadist organizations like "Islamic State" and the Taliban? DW looks at the historical and religious import of a geographical area that once covered many present-day nations. (25.07.2016)