Violent attacks in Afghanistan have continued despite ongoing peace talks between the Taliban and the US in Qatar. Is the international engagement with the Taliban actually emboldening Islamist militants? 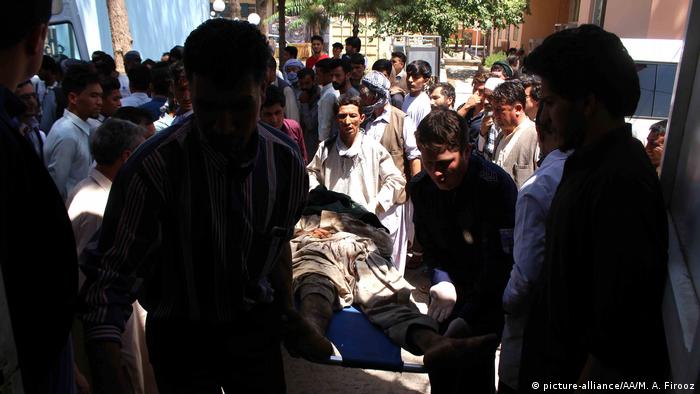 At least 34 Afghan civilians lost their lives in a bomb attack on Wednesday. Most of the victims were women and children, according to Afghan authorities.

No group immediately claimed responsibility for the attack.

But Afghan government officials say that Taliban militants have not scaled down violence despite their "no-attack pledge" to international negotiators.

The continued violence in Afghanistan raises a number of questions: 1) Are high-profile peace negotiations in Doha, Qatar, yielding any results? 2) Is the international community giving too many concessions to the Taliban? 3) Will a peace deal with the Islamist group end bloodshed in the war-ravaged country?

The Taliban are demanding a complete withdrawal of foreign troops to make way for a possible peace deal. The group also says that it won't engage in direct talks with the Afghan government until the US pulls all of its troops out of the country.

It seems that US President Donald Trump's administration wants to convince the Taliban that their conditions will be met. On Monday, US Secretary of State Mike Pompeo said that President Trump directed him to reduce American combat troop numbers in Afghanistan by the next presidential election in 2020.

"End the endless wars, draw down, reduce," said Pompeo, adding that the reduction would also apply to forces from other countries currently in Afghanistan.

The US formally ended its Afghan combat mission in 2014. However, around 14,000 US troops remain to provide air support and training to Afghan security forces.

"We hope that overall the need for combat forces in the region is reduced," Pompeo said. "I try not to do timelines, but I'm optimistic," he added.

But the latest attacks in Afghanistan show that the troop withdrawal could be a huge mistake. Security analysts say the withdrawal of foreign troops is likely to strengthen the Taliban's position. The group already controls over 50% of Afghan territory, according to some studies.

"The Taliban would be in an even stronger position and will not see the need to engage with the Afghan government," Wahid Muzhda, a Kabul-based security analyst, told DW.

"We don't know if the Taliban will then agree to talk to the Afghan government or demand an interim administration that they could become a part of," he added.

In the past few months, Taliban attacks have resulted in the deaths of scores of civilians across the war-torn country. According to UN statistics, at least 3,804 Afghan civilians, including 927 children, lost their lives in 2018. This year, according to NATO, the Taliban have killed 1,075 people since April 11.

Read more: UN: US, allies killed more civilians than Taliban in Afghanistan in first half of 2019

Experts say that the Islamist insurgents are trying to demonstrate their strength in the battlefield as they talk peace in Doha, Qatar.

"Both sides [Taliban and Kabul] want to have an upper hand in negotiations," Aziz Rafiee, managing director of the Afghan Civil Society Forum, told DW. "We don't expect the number of attacks to go down while talks continue. On the contrary, there could be more bloodshed," he added.

Violent attacks are not only perpetrated by the Taliban; other armed militant groups like "Islamic State" (IS) and Taliban factions that oppose a peace deal with the US and Afghan authorities are also targeting civilians. Two of the three explosions last week in Kabul were claimed by IS, which has gained strength in eastern Afghanistan, but is also carrying out deadly attacks in other parts of the country.

Experts say that irrespective of a potential peace deal between the Taliban and the US, Taliban factions and other militant groups will not cease violence.

"Unless there is an all-inclusive peace process, I fear the civilian killings will not stop in Afghanistan," Rafiee warned.

Since coming to power in 2016, Trump has made no secret of his desire to withdraw troops from Afghanistan as soon as he can. His administration started direct talks with the Taliban in Qatar, where the militant group has a political office.

Washington now expects Pakistan to use its influence on the Taliban and force them to agree to a cease-fire. Experts say that the US-Taliban talks have given an upper hand to Pakistan and cornered the Afghan government.

Many security analysts say that Pakistan's powerful army helped create the Taliban in the early 1990s, and that it continues to support at least some factions of the group.

Ahmad Saidi, a former Afghan diplomat, says that despite Islamabad's promise to support the US in talks with the Taliban, there are major challenges for the peace process in the coming months. "Pakistan has made such promises in the past and did not deliver on them, so there is no guarantee that this time it would be any different," Saidi told DW.

There are already signs of opposition to an Afghan peace deal if it involves an increased role for Pakistan. Last week, former Afghan President Hamid Karzai told a peace conference in Kabul that he was in full support of peace, but "could not accept a deal between two countries" on Afghanistan's future.

"Trump wants to leave Afghanistan at any cost and wants Pakistan to act as its agent," Faiz Mohammad Zaland, a lecturer at Kabul University, told DW, adding that such an agreement could only lead to more bloodshed and instability in Afghanistan.

Why Afghanistan is skeptical of Donald Trump's Pakistan outreach

US President Donald Trump discussed the Afghan conflict with Pakistani Prime Minister Imran Khan on Monday at the White House. Both the Trump-Khan meeting and some of US president's comments didn't go down well in Kabul. (23.07.2019)