An Afghan government official had earlier said a delegation would meet the Taliban within the next two weeks in Europe. The militant group dubs the government an "American puppet" with no negotiating power. 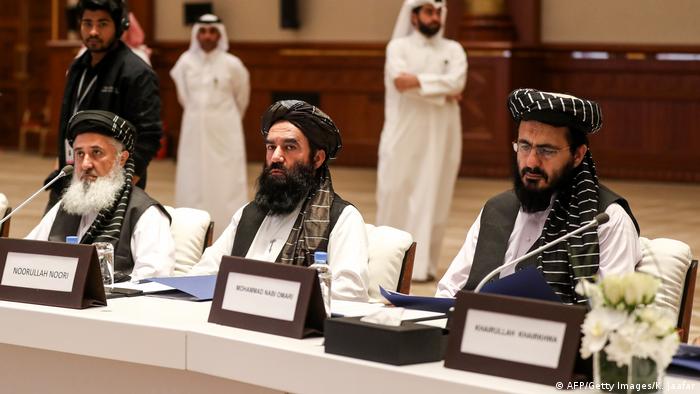 The Taliban on Sunday denied reports that they would be holding direct talks with the Afghan government's representatives in the coming weeks.

The Islamist group said that talks with Kabul would only take place after the complete withdrawal of foreign troops from the country.

"Intra-Afghan talks will start only after a foreign force withdrawal is announced," Suhail Shaheen, a spokesman for the Taliban's political office in Qatar, said on Twitter.

Earlier on Sunday, Abdul Salam Rahimi, Afghanistan's state minister for peace affairs, said the government was set to hold its first-ever direct talks with the Islamist group in Europe.

Zalmay Khalilzad, the US special envoy for Afghanistan, tweeted that another round of "intra-Afghan" talks will take place "after we conclude our own agreement." The talks would include the Taliban and "an inclusive and effective national negotiating team consisting of senior government officials, key political party representatives, civil society and women," Zalmay added.

The Taliban have so far shown little interest in engaging with the Afghan government. The group, which ruled Afghanistan from 1996 until the US invasion of the country in 2001, calls President Ashraf Ghani's regime an "American puppet" with no negotiating power.

Washington has been holding its own peace talks with the Taliban in Doha, Qatar, for nearly a year. Taliban and US negotiators say they have made progress on a potential peace deal to end the 18-year violent conflict in Afghanistan.

The Taliban have reportedly also agreed to visit Pakistan and meet Prime Minister Imran Khan. Pakistan, which borders Afghanistan, is trying to help US-led talks with the Taliban.

The Afghan government feels sidelined in peace talks, analysts say. Ghani insists that long-lasting peace would only be achieved through Afghan-led and Afghan-owned peace talks.

In the past few months, Taliban attacks have killed scores of civilians across the war-torn country. Experts say that Islamist insurgents are trying to demonstrate their strength in the battlefield as they talk peace in Qatar.

According to UN statistics, at least 3,804 Afghan civilians, including 927 children, lost their lives in 2018. NATO statistics show that the Taliban have killed 1,075 people since April 11.

Security analysts say that civilian casualties could mount during the peace talks because the Taliban and Afghan security forces want to negotiate from a position of strength.

"Both sides want to have an upper hand in negotiations," Aziz Rafiee, managing director of the Afghan Civil Society Forum, told DW.

"We don't expect the number of attacks to go down while talks continue," he said. "On the contrary, there could be more bloodshed."

Afghanistan peace is likely to be the key topic during talks between Pakistani Prime Minister Imran Khan and Trump. But analysts warn Washington must not turn a blind eye to a crackdown on media and political plurality. (19.07.2019)