At least 63 people have been killed and nearly 200 wounded in a suicide bombing in Kabul. An Islamic State-affiliated group in Afghanistan claimed responsibility for the deadly attack.

A suicide bomb attack at a wedding hall in Kabul killed at least 63 people and left some 200 injured, Afghan officials said on Sunday.

Feroz Bashari, a government spokesman, said the bombing took place in the western part of the city.

"Unfortunately, the blast caused civilian casualties," Rahimi said, adding that among them were women and children.

More than 1,000 people had been invited to the wedding, a witness said.

A group affiliated with the militant organization "Islamic State" claimed responsibility for the bombing.

The Taliban conducting peace talks with the US in Qatar condemned the attack and denied any involvement.

The wedding was believed to be a Hazara-Shiite gathering. Shiite Muslims are frequently targeted in Sunni-majority Afghanistan and neighboring Pakistan by hardline Sunni outfits.

A Kabul emergency hospital initially said 20 wounded people had been brought in for treatment.

Afghan weddings are big and vibrant affairs, with hundreds or often thousands of guests celebrating inside huge wedding halls, where the men are usually segregated from the women and children. 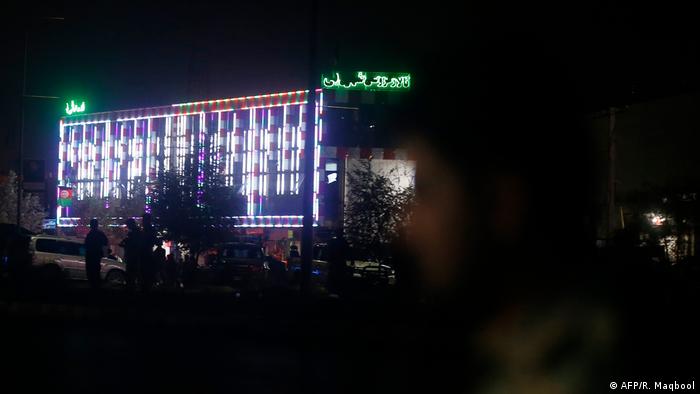 Insurgent attacks on Afghan weddings have occurred in the past. Wedding venues are easy targets for attackers as they frequently lack rigorous security precautions.

Saturday night's explosion came a few days after the end of the Muslim holiday of Eid al-Adha and just before Afghanistan marks its 100th independence day on Monday.

The explosion occurred just as the US and the Taliban are widely expected to sign off on a deal that would see the exit of American troops from Afghanistan in return for various security assurances from the insurgents.

US President Donald Trump has said since the start of his presidency that he wants American troops out of the war-ravaged country, where Washington has spent over $1 trillion on military operations and reconstruction since 2001.

The Saturday attack was the 17th to take place in Kabul since the beginning of the year and the second in August alone. These attacks have claimed at least 176 lives and injured at least 914 people.

The Taliban has claimed responsibility for a car bomb that has killed at least 14 people and well over 100 injured in the Afghan capital Kabul. Violence in the region has escalated ahead of crucial elections. (07.08.2019)

A suicide attack on the office of an Afghan vice presidential candidate has killed at least 20 people in Kabul. It comes despite intensifying international efforts to bring peace to the war-ravaged country. (29.07.2019)

An Afghan government official had earlier said a delegation would meet the Taliban within the next two weeks in Europe. The militant group dubs the government an "American puppet" with no negotiating power. (28.07.2019)