A suicide attack on the office of an Afghan vice presidential candidate has killed at least 20 people in Kabul. It comes despite intensifying international efforts to bring peace to the war-ravaged country. 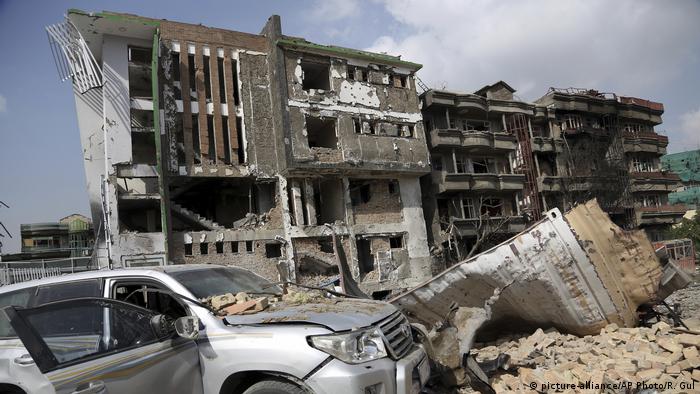 The ministry said the assault began on Sunday when a suicide bomber detonated an explosives-packed car at the entrance to the building, then three attackers ran inside. Six hours later, the siege ended with all attackers killed and about 150 people who had been trapped in the building rescued.

The incident occurred on the first day of campaigning for upcoming presidential elections.

Already delayed twice this year, the elections are likely to prove a severe organizational and security test for Ghani's government, which came to power in 2014 following a bitterly fought campaign and a poll marred by accusations of widespread fraud.

Afghan voters remain skeptical about the prospects of a free and fair election.

Sayed Jan, a 27-year-old student, told AFP news agency that he won't be voting this time around.

"We have been betrayed by the candidates in the past. We cannot trust them this time," he said. "We need peace in Afghanistan instead of elections. Even if I vote, the election will be fraudulent."

Central Kabul is a high security zone, filled with concrete blast walls, razor wire and police checkpoints. The attack there reflects the woeful security situation throughout  the country and how difficult it is likely to be to maintain security during the election season.

President Ghani declared on Sunday that "peace is coming" to the war-torn nation, but his administration has so far been excluded from peace talks with the Taliban. The insurgent group has remained steadfast in its refusal to negotiate with Ghani's government, which it regards as a US "puppet" regime.

US diplomats have been talking with the Taliban for months to agree a timetable for the withdrawal of foreign forces in exchange for security guarantees. The talks are expected to resume early next month amid increasing expectations that the two sides are close to an agreement.

Zalmay Khalilzad, the veteran Afghan-American diplomat who is leading the US side in peace negotiations with the Taliban, condemned the latest attack.

"The attack on Amrullah Saleh's political party offices was grotesque and a clear act of terrorism," Khalilzad said on Twitter.

The Afghan governemnt's grip on power and control of territory has come under increased strain over the past couple of years, as the Taliban now control or influence about half of Afghanistan.

Besides conflict, Afghanistan is plagued by an array of problems like corruption, a lackluster economy, high unemployment and soaring crime.

An Afghan government official had earlier said a delegation would meet the Taliban within the next two weeks in Europe. The militant group dubs the government an "American puppet" with no negotiating power. (28.07.2019)