The Taliban has claimed responsibility for a car bomb that has killed at least 14 people and well over 100 injured in the Afghan capital Kabul. Violence in the region has escalated ahead of crucial elections. 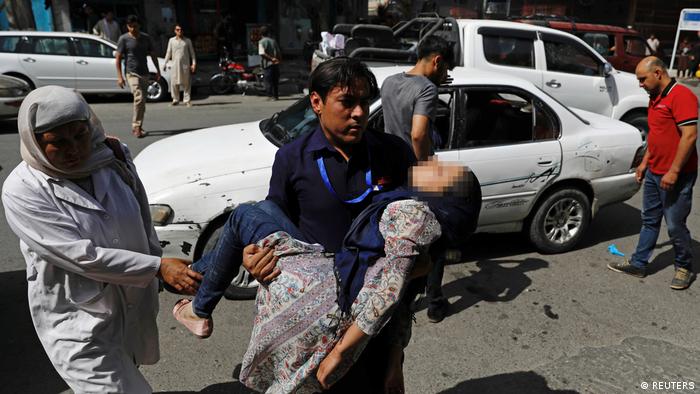 A car bomb exploded outside a police station in the Afghan capital on Wednesday morning, killing at least 14 people and injuring 145 others, officials said.

The Taliban claimed responsibility for the suicide bomb attack, which occurred around 9:00 A.M. (0430 UTC) in western Kabul, where many people from the minority Hazara community live.

The bomb went off when a vehicle was stopped at a checkpoint outside the police station, said Interior Ministry spokesman Nasrat Rahimi.

Health Ministry spokesman Wahidullah Mayar said the injured, mostly civilians including women and children, had been taken to hospital.

A huge plume of smoke could be seen over the capital following the explosion, which shattered shop windows far from the blast site, according to officials and witnesses.

Rise in violence ahead of elections

Violence has surged across Afghanistan and in Kabul as the US and the Taliban negotiate a peace deal ahead of elections slated for September 28.

According to the United Nations, more than 1,500 civilians were killed or wounded in the Afghan conflict in July alone, the highest monthly toll this year and the worst single month since May 2017.