Afghanistan′s Hazaras: Targeted by militants, neglected by government | Asia | An in-depth look at news from across the continent | DW | 23.07.2016

At least 80 people have been killed in an attack on the Shiite Hazara community in Kabul. "Islamic State" has claimed responsibility, highlighting the group's increasing presence in Afghanistan. 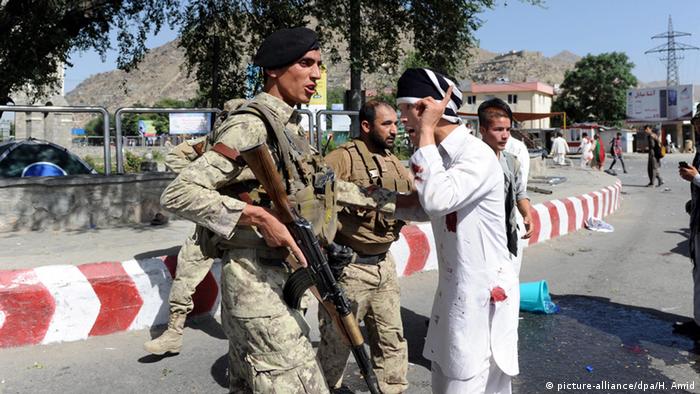 Two blasts hit a large demonstration by members of the Hazara minority in Afghanistan's capital on Saturday, killing at least 80 people and wounding hundreds of others, according to the Health Ministry. The death toll is likely to rise.

In a statement released after the attack, Afghan President Ashraf Ghani condemned the attack, calling it an act of terror.

The militant group "Islamic State" (IS) claimed responsibility for the suicide attacks, explicitly mentioning the Shiite Hazara community as the target in a statement.

"Two fighters from Islamic State detonated explosive belts at a gathering of Shiites in the city of Kabul in Afghanistan," said a brief statement on the group's Amaq news agency.

IS, a predominantly Sunni militant group, is opposed to Shiites and, like the Taliban, does not recognize them as Muslims.

The Taliban, a fierce enemy of IS, quickly issued a statement Saturday denying any involvement in the Kabul attack. "We would never take part in any incident that divides the Afghan people," Taliban spokesman Zabihullah Mujahid said.

The Persian-speaking Hazara people, estimated to make up about 9 percent of Afghanistan's population, are the country's third-largest minority and have been repressed throughout the country's history.

Tens of thousands of Hazaras took to the streets of Kabul on Saturday to protest the government's reroute of the TUTAP transnational electricity project.

The TUTAP project is designed to deliver electricity from Turkmenistan and Tajikistan to Afghanistan and Pakistan (the acronym comes from the names of the countries involved), making power available to millions of Afghans by connecting pre-existing infrastructure. The German technical advising firm Fichtner originally recommended that the power route run through the Hazara-dominated Bamyan province, near planned Chinese and Indian natural resource projects and a power station that could be connected to the line.

According to Daud Noorzai, deputy chief of staff for President Ghani, the TUTAP project wouldn't have delivered power to Bayman province anyway. Like a water pipeline, high-tension power lines don't deliver to the areas they pass through, Noorzai told DW: "Changing to the current structure to pass through Bamyan would not only create more costs, but also prolong the completion of the project by years."

In the future, the government says it wants to be more transparent about the implementation of its projects and prevent their manipulation by different sides of the political spectrum. 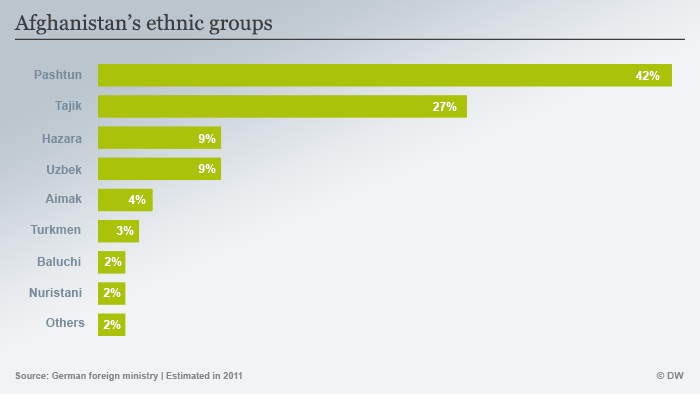 But the Hazaras' anger has been sparked by far more than the revised calculation, according to Alexey Yusupov, head of the Friedrich Ebert Stiftung in Kabul. "This has a lot to do with a sense of injustice, and of discontent with the government in general - much less than it has to do with the technical aspects of the project," he told DW.

In a way, TUTAP has become a specific issue for Hazaras to vent their general anger. "This has become an emotional issue, because the protesters have the feeling that the government is taking something away which they had promised," Yusupov said.

Reza, who lost two of his friends in Saturday's blasts, blamed the government for failing to protect the peaceful demonstrators.

"I don't have words to describe the situation," Reza told DW. "It is a very sad day for the people of Afghanistan."

Despite the deaths, protesters have vowed to continue their demonstrations. "Our movement will not end because of these attacks," Khatama said. "We are demanding our rights - and we will continue to do so."

"The Bamyan province urgently needs electricity," Sharifa, another Hazara protester, told DW. "I was in the province yesterday and saw some students reading under the streetlights. The government must pay attention to our needs." 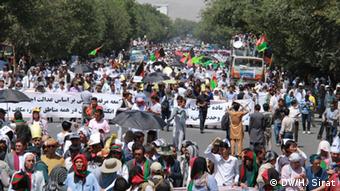 The TUTAP project aimed to unite the country's power lines, but instead caused a split down ethnic lines

While Kabul continues to ignore the demands of the Hazara community, the Sunni militant groups have increased their attacks on them.

In November, thousands of Hazaras marched through Kabul to protest government inaction after seven members of their community were beheaded by IS militants.

"Every public gathering is a potentially dangerous endeavor in Kabul," Yusupov said. "We are not sure whether the government had any indications about an imminent attack. ... But if the IS claim is true that it carried out the attack, Middle Eastern-style sectarian violence in Afghanistan is a very bad omen for the country," he added.

The latest attacks in Kabul also prove that IS is expanding in Afghanistan despite the government's claims that the group had been defeated in March after a monthslong military operation.

The volatile situation in the eastern Nangarhar province and other parts of the war-ravaged country indicates that IS is gaining ground in Afghanistan - and that the government may be underestimating the group's strength.

"IS remains the major problem for the Taliban movement," Siegfried O. Wolf, a Brussels-based South Asia researcher, told DW. "It is gaining strength and the Taliban infighting will help this process."

On July 6, US President Barack Obama shelved plans to cut the US forces in Afghanistan to 5,000 by the end of 2016, opting to keep 8,400 troops there through the close of his presidency in January next year. 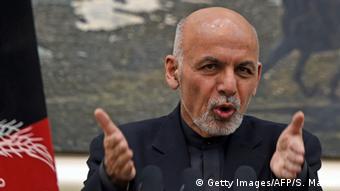 Is President Ghani taking the IS threat seriously?

Experts say that an increased role for the US troops in Afghanistan not only signals Washington's willingness to support the Afghan government for a longer period of time, but also highlights growing concerns about a surge in violence.

The Afghan government accuses Pakistan of supporting militants, and some experts believe that Islamabad's lack of cooperation in the fight against terrorists emboldens both IS and Taliban fighters in Afghanistan.

The current security situation, analysts say, demands that President Ghani take the IS threat more seriously and urge Islamabad to cooperate in the fight against the terror outfit.

Afghanistan's Interior Ministry reports at least 80 people were killed and 231 wounded in a suicide bombing. Militant group "Islamic State" claimed responsibility for the attack which targeted a Hazara protest in Kabul. (23.07.2016)