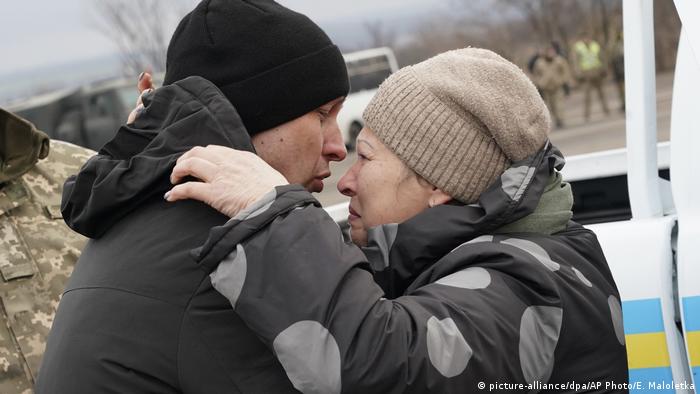 Pro-Russia separatists and the Kyiv government carried out a landmark prisoner swap of Ukrainian soldiers in exchange for Ukraine-held separatists on Sunday near the rebel-controlled town of Gorlivka.

The exchange was agreed upon by Russian President Vladimir Putin and Ukrainian President Volodymyr Zelenskiy in Paris in December, in a meeting that France and Germany helped broker.

The swap took place in the rebel-controlled Donetsk region. "At the Mayorske checkpoint the process of releasing detained persons has begun," the official Twitter account of the Ukrainian president said on Sunday.

"In the run-up to the New Year and Orthodox Christmas celebrations, today's exchange is a long--awaited humanitarian gesture that should help to restore trust between both sides," the leaders said in the statement.

Merkel and Macron also acknowledged that "further work will be needed" in order to exchange all those who have been detained in relation to the conflict.

The all-for-all prisoner exchange has been seen as a sign of the gradual thaw between Moscow and Kyiv after Russia's annexation of Crimea in 2014 and the yearslong conflict in eastern Ukraine that killed some 13,000 people.

"We are all waiting for this," the Ukrainian leader said on Saturday. He described the exchange as "the most difficult task this year."

Many commentators hope that this could spell an end to the conflict, given improved relations between Zelenskiy and Putin, who has described the Ukrainian president as "likable."

Who are the prisoners?

It was previously announced that some of the prisoners Kyiv has handed over are riot policemen suspected of killing protesters during a pro-Western uprising in 2014.

Their apparent release has caused controversy in Ukraine, with hundreds of protesters gathering in Kyiv on Saturday. Ukrainian officials have said that the riot policemen will remain on trial.

The identities of the other prisoners have not been revealed.

The last prisoner swap between Ukrainian officials and the separatists took place in December 2017. Russia and Ukraine exchanged 35 prisoners each in September 2019 in a move that required a great deal of negotiation. Russia released the filmmaker Oleg Sentsov and 24 Ukrainian sailors.

After Vladimir Putin slammed Polish envoy to Nazi Germany as an "anti-Semitic pig," Poland summoned Russia's ambassador. The nations dispute the role of Ribbentrop-Molotov Pact of non-aggression in the lead-up to WWII. (28.12.2019)