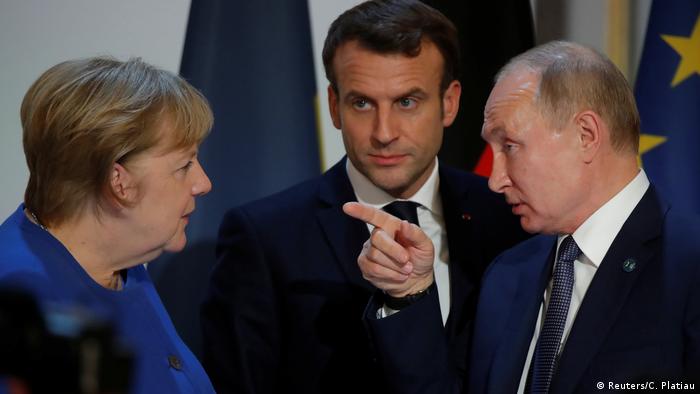 Things are going swimmingly, Russian President Vladimir Putin must have thought at the pre-Christmas summit in Paris. The West and Ukraine are willing to compromise to woo him, the undisputed ruler of Russia, and negotiate a peace agreement for Ukraine's Donbass region.

The paper wasn't much of a breakthrough — its signatories commit to working towards the 21st ceasefire, it also talks about a prisoner exchange. Political steps will not be discussed until late spring.

Negotiating this must have been a breeze for the Kremlin boss as his adversaries struggled to feign unity.

French President Emmanuel Macron is out to charm Putin, talking about a new partnership that must surely be in Russia's interest, too. German Chancellor Angela Merkel, meanwhile, is getting exasperated by Macron's unilateral escapades.

Last week's NATO summit, ahead of which Macron dubbed the alliance "brain-dead," showed the full extent of the discord within NATO. The eastern members are ever more wary of Russia, France is keen on enticing Moscow back into the international fold.

It's worth noting that when it comes to putting pressure on Ukraine's TV star-turned-President Volodymyr Zelenskiy to be more flexible and willing to compromise, France and Germany are cooperating.

The EU's stance on the Russian Nord Stream pipeline, however, is divided; Germany generally sees it favorably, many eastern states are against it.

With or without Russia — it's complicated

Given this state of play, Putin can sit back and relax. Of course, he wants to get rid of the tedious EU sanctions, but that niggle pales into insignificance when it comes to preserving his hold on eastern Ukraine and Crimea.

The annexation of the peninsula by Russia was not even on the agenda in Paris. But Putin uses this conflict, which is simmering on a low but steady heat, to keep the Europeans, who he sees as adversaries, on their toes.

It also helps prevent Ukraine's ambitions to move closer towards the EU and NATO, as countries with ongoing conflicts cannot be admitted as members. It's the same recipe Putin uses for Georgia, where he sliced off South Ossetia, now a disputed territory.

The West and Ukraine need Putin so much that they're willing to put to one side the fact that they suspect the Russian state to be behind the MH17 plane crash, the poisoning of Russian spy Sergey Skripal in the UK and the murder of a Georgian national in a Berlin park.

Wrangling any kind of compromise from Putin is a tall order for the Germans and the French, as their position has been weakened by a strained relationship with the US, their NATO partner.

Your weakness is my strength

For some unfathomable reason, US President Donald Trump believes Putin is "a great guy" and a "terrific person," even though the Russian leader has not budged an inch on any of Trump's demands and concerns.

And if that isn't enough to reassure Putin that he is in a strong position right now, he only has to take one look at the streets of Paris, where a general strike is paralyzing the French capital. Angry protesters at home do not bode well for a strong negotiating position abroad.

And what about Angela Merkel? She was instrumental in the first round of the Normandy Format in 2014 as well as the subsequent Minsk peace agreements. Now, she is treading softly.

For Putin, who will be in office longer than Merkel, that can only mean that her political days are numbered. Her coalition at home is teetering on the brink, so the wily Russian leader must think: Why give in now?

The leaders of Ukraine, Russia, France and Germany are in Paris for a long-awaited summit on the conflict in eastern Ukraine. The talks aim to revive a stalled 2015 cease-fire deal. (09.12.2019)

Turkey cuts interest rates again, even amid 80% inflation 1h ago

Drought in Europe: Rainfall will not affect low water levels in Germany's rivers 1h ago

Opinion: Olaf Scholz should have shut down Mahmoud Abbas — he failed 23h ago