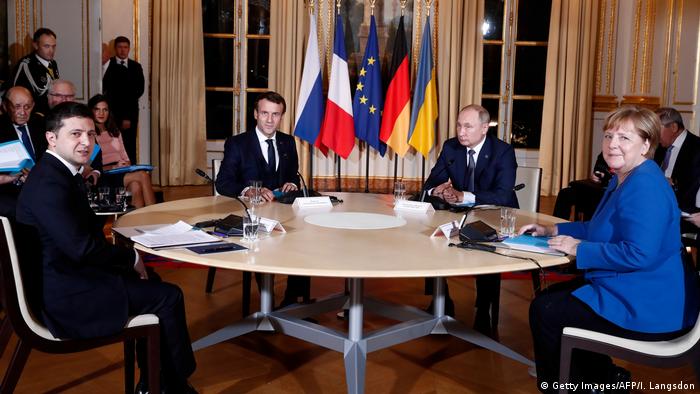 Zelenskiy, who was meeting Putin in person for the first time, has made resolving the conflict in the country's eastern Donbass region a priority of his presidency. The two leaders also held their first ever bilateral negotiations on the summit's sidelines, the Kremlin said.

Following the meeting, Putin said he was satisfied with the discussion, adding in English, "Yes, I'm happy." The leaders were expected to issue a joint statement later in the evening.

Read more: Putin, Zelenskiy set to face off in Paris 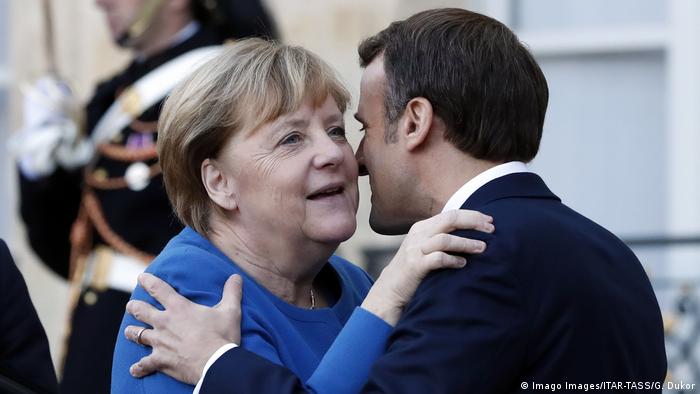 The Paris meeting aimed to get a 2015 peace agreement signed by Ukraine and Russia in Minsk back on track. Brokered with help from France and Germany, the accord called for the withdrawal of heavy weapons, the restoration of Kyiv's control over its borders, and wider autonomy and local elections for the separatist regions.

The so-called "Normandy Format" meetings between the quartet began on the sidelines of 2014 ceremonies in Normandy marking the 70th anniversary of the D-Day landings, attended by all four heads of state and government, as part of peace efforts. But the last time the four national leaders gathered in this format was in 2016.

Monday's summit was expected to build on progress in recent weeks, including a prisoner exchange deal between Ukraine and Russia, and the two countries' pledge to pull back troops from the front lines in eastern Ukraine.

"A number of people are hoping that the next step can be taken tonight in Paris, which would be a partial withdrawal of heavy weapons," DW correspondent Georg Matthes said. "There are even some optimists here speaking of a breakthrough … others have told me that's a bit far-fetched."

Putin is expected to use the summit to increase pressure on his Ukrainian counterpart to stick to the terms of the Minsk accord, particularly giving rebel-held regions more autonomy and allowing them to hold elections in return for an end to the fighting.

"We will expect additional agreements, which will make it possible to end that conflict, which will ensure people's safety in Donbass, ensure their rights, which are enshrined in the Minsk agreements ... and which will help to put an end to that conflict," Russia's top diplomat Sergey Lavrov said on Friday.

Zelenskiy, for his part, is hoping to adjust the agreement's timeline to allow Ukraine to take back control of its border with Russia before local elections in the separatist regions, rather than afterwards as stipulated in the accord. Moscow has objected to any change to the timeline.

Progress in peace efforts could ultimately lead to the lifting of EU sanctions imposed on Russia over its role in the conflict. The EU is expected this week to extend the sanctions by another six months.

"I see no reason to change anything in the European Union's sanctions policy toward Russia in this matter," German Foreign Minister Heiko Maas said in Brussels, adding that "it would be good if we could get there at some point.''

"We will continue what we thought was right so far — to extend the sanctions — because the reasons that led to the sanctions continue to exist," he said.

The talks in Paris come as the World Anti-Doping Agency (WADA) announced it was banning Russia from a number of top international sporting events over the next four years for tampering with doping tests. The sporting body said Russia had planted fake evidence and erased files linked to positive doping checks, and would therefore be excluded from the 2022 football world cup and the next summer and winter Olympic Games.