Russian broadcaster TNT stopped showing sitcom "Servant of the People," which stars Ukraine President Volodymyr Zelenskiy, after airing it for just one day. The channel is owned by Russian energy company Gazprom. 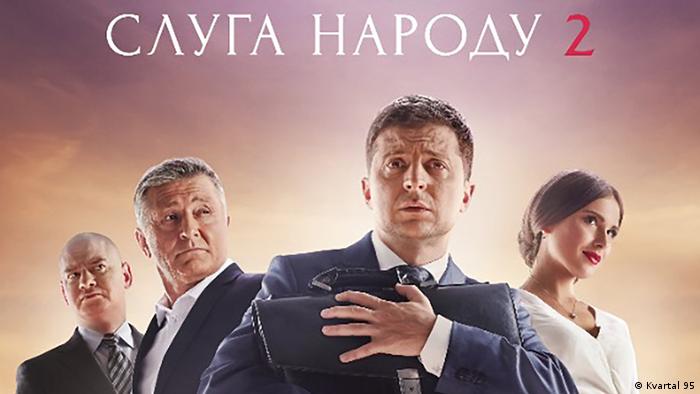 A Russian TV channel faced ridicule online after censoring a joke at the expense of President Vladimir Putin from the Ukrainian sitcom "Servant of the People." The private broadcaster TNT also stopped airing the comedy series after showing the first three episodes on Wednesday.

The Russian-language sitcom stars Volodymyr Zelenskiy, a comedian and actor who went on to become president of Ukraine. In the  show, he plays history teacher Vasyl Goloborodko who stumbles into public eye after his anti-corruption rant goes viral. The fictional Goloborodko ends up becoming president of Ukraine, in a narrative conspicuously similar to Zelenskiy's real-life rise to power. The image of a naive but pure-hearted Goloborodko is credited with launching Zelenskiy's political career.

After taking power earlier this year, Zelenskiy signaled a wish to reduce tensions with Russia. Zelenskiy met Putin in Paris on Monday, where the two agreed to a ceasefire to help resolve the conflict with the pro-Russian separatists.

However, viewers quickly noted that a scene mentioning Putin was cut from the first episode. The joke makes a reference to a vulgar anti-Putin chant, "Putin Huylo," made popular by Ukrainian football fans. "Huylo" refers to a part of male genitalia in both Ukrainian and Russian.

In the missing scene, Zelenskiy's character is shown choosing luxury watches under the tutelage of a shady mentor. The mentor says that Putin's preferred brand is the Swiss-made Hublot. "Putin Hublot?" Zelenskiy asks. "Yes," the other character responds.

Pulled from air for 'marketing' reasons

According to program listings cited by Vedomosti daily, TNT was set to continue showing "Servant of the People" on Thursday and Friday. However, those listings have since been changed.

The channel's representatives claim that they had never planned to show more than the first three episodes. The rest of the show, according to TNT, will be available for paying customers online. The company described it as a "deliberate marketing move."

"Our goal was to entice users of the platform with new content," spokeswoman Ekaterina Trofimova told the AFP news agency.

It was not immediately clear what financial benefit this strategy might bring to TNT, as full episodes of the sitcom are already available for free on YouTube.

Putin 'does not watch TV shows'

Vladimir Putin's spokesman Dmitry Peskov denied that the Kremlin had any influence on the broadcaster's decision.

"We categorically do not interfere, we have no right to interfere in their editorial policy," Peskov said.

When asked if censorship was getting more common on Russian TV and if Putin's name should not be used in jokes, Peskov also said the answer to both of those questions was "negative."

After the airing of the show on Wednesday, Peskov told reporters that Putin did not watch it.

"He does not watch TV shows," Peskov said.

The grim discovery came after neighbors complained of a smell that turned out to be the decomposing bodies. Russian dissident Alexei Navalny slammed Vladimir Putin and his "stupid war" before a court.