Are the US and China tiptoeing toward an Indo-Pacific Cold War?

After Washington said it will share highly sensitive defense technology with Australia in the name of securing a "free and open" Indo-Pacific, all eyes are on the region and China's response. 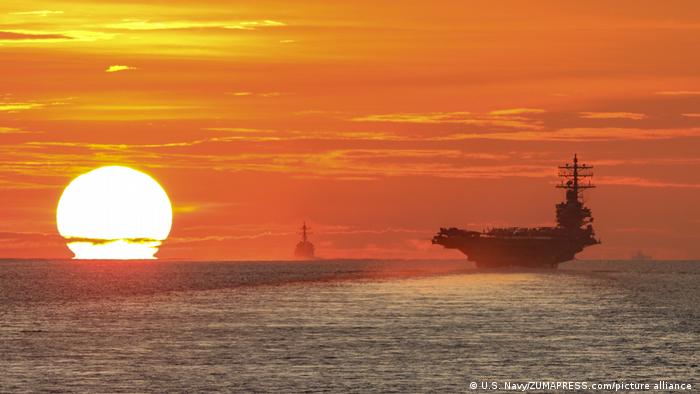 The new security partnership between the United States, United Kingdom and Australia, dubbed "AUKUS," has made waves from Asia to Europe. Beijing called the partnership "highly irresponsible" and indicative of a Cold War-style "arms race."

Washington's European allies received AUKUS as a surprise and a snub. France was especially furious, as the agreement meant scrapping a multibillion-dollar, diesel-electric submarine deal with Australia in favor of US nuclear-powered vessels.

The AUKUS countries have hailed the pact as an "endeavor" to "sustain peace and stability in the Indo-Pacific region," an area conceived as stretching from India to Australia, and ostensibly the scene of a geopolitical showdown between the US and China.

As the Sino-American rivalry continues to take shape, Washington with AUKUS looks to have taken one of the biggest steps in recent history toward an alliance-building strategy to balance China's growing military capability.

President Xi Jinping's ambitious geopolitical plans for China are also behind the dusting off of the Quadrilateral Security Dialogue (QUAD), which is holding its first in-person leaders' summit since it was launched by former Japanese Prime Minister Shinzo Abe in 2017.

US President Joe Biden is hosting the leaders of India, Japan and Australia for talks in Washington on Friday, focused on what the White House has called the "priority of engaging in the Indo-Pacific."

After dismissing the Quad as mere "sea foam" in 2017, by October 2020 China compared the grouping to a "Pacific NATO" promoting a "cold war mentality to stir up confrontation."

Similar rhetoric was employed by Beijing once again, this time in response to the AUKUS announcement, although the idea of nuclear-powered submarines based in Australia is likely to cause more consternation in Beijing than lofty statements following a security dialogue. 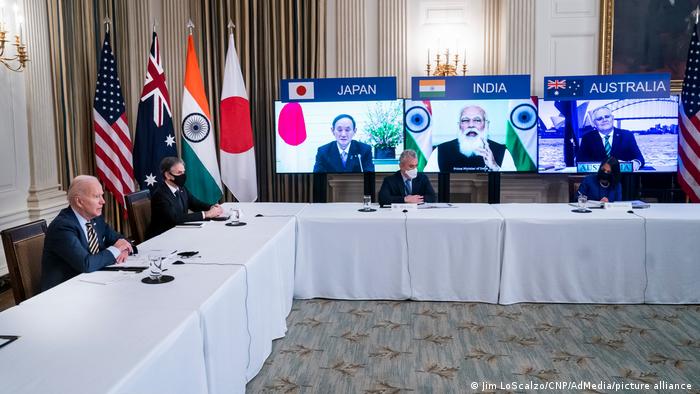 US President Joe Biden is hosting the leaders of India, Japan and Australia for talks in Washington on Friday after the last Quad meeting was held virtually in March 2021

"I believe Beijing is more likely to be very concerned about AUKUS, especially given that this new setup also comprises a robust military technology element," said Collin Koh, a strategic analyst at the S. Rajaratnam School of International Studies (RSIS) in Singapore.

"AUKUS is made up of close allies, and the chance of it becoming a basis for some sort of future 'Indo-Pacific NATO' is more plausible to imagine than the Quad is," he told DW.

Biden's friend down under

At the core of AUKUS is a pledge from the US to share its ultra-sensitive nuclear submarine propulsion technology, allowing Australia to acquire nuclear-powered submarines at the "earliest achievable date."

It is a major step. For only the second time, the US has shared nuclear technology with an ally, the first instance having been with the UK in 1958. 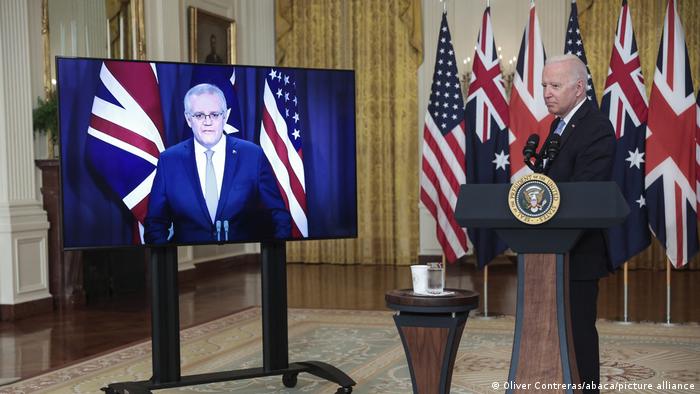 The AUKUS agreement comes amid months of deteriorating bilateral and trade relations between China and Australia.

Richard Maude, a senior fellow at Asia Society Policy Institute in Australia, told DW that the ever-closer strategic ties between Australia and the United States have deeper roots — a long-standing and close alliance and shared concern about China's growing power, nationalism and assertive foreign policy.

"Cooperating to help balance China's power serves the interests of both countries and has been intensifying for several years," he said, adding: "Policymakers in Canberra see the alliance as more relevant and more important than ever — a vital hedge against Chinese aggression."

Australia binding itself so tightly to a US-led security scheme has raised debate in Canberra over the diplomatic cost of ratcheting up deterrence against China.

"The US is by far still the only plausible counterweight against China given its sheer economic, military and diplomatic clout," said Koh. "Notwithstanding concerns about US unilateralism and strategic reliability, are there better alternatives for countries like Australia?" he added.

President Biden emphasized the depth of the new partnership ahead of a sit-down with Australian Prime Minister Scott Morrison at the UN General Assembly on Tuesday, saying that the US had "no closer or more reliable ally than Australia."

Although nowhere in the AUKUS or Quad communiques is countering China explicitly mentioned, Beijing is clearly the elephant in the room.

Lijian warned the group that it should "abandon the obsolete cold war zero-sum mentality and narrow-minded geopolitical concepts," or else risk "harming their own interests."

A pugnacious English-language op-ed published this week in the Communist Party-backed Global Times went even further, warning that "Australian troops are also most likely to be the first batch of Western soldiers to waste their lives in the South China Sea," in the event of conflict with the People's Liberation Army (PLA).

Putting the US-China rivalry on ice

However, dialogue forums like the Quad are a long way away from having a NATO-style mutual defense assurance. And the submarines promised to Australia under AUKUS will likely not be operational until sometime in the 2030s. 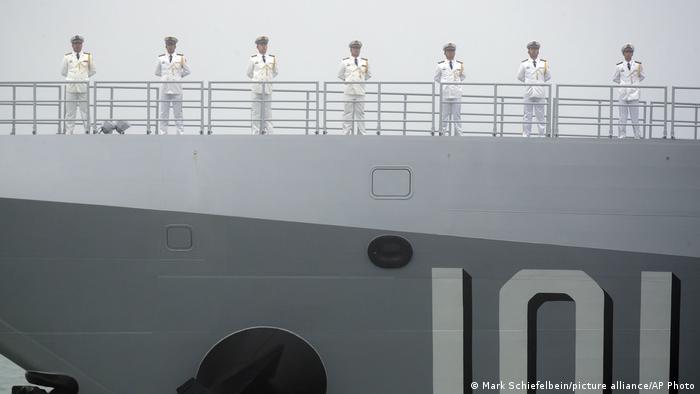 Officially, neither side is openly showing signs of outright hostility. During the opening of the UN General Assembly on Tuesday, Biden said the US is "not seeking a new Cold War or a world divided into rigid blocs."

President Xi maintained that "China has never, and will never, invade or bully others or seek hegemony."

Charles Dunst, an associate at the US-based political risk consultancy Eurasia Group, told DW the US and its allies would work to avoid war with China, even while "pursuing efforts like AUKUS to counter Beijing's increasingly assertive behavior in the Indo-Pacific."

UN Secretary-General Antonio Guterres warned last week that the "completely dysfunctional" Sino-US relationship is risking a "Cold War" that would probably be "more dangerous and more difficult to manage" than the original.

The most dangerous potential flashpoint in the Indo-Pacific remains Taiwan, which Beijing considers a renegade Chinese province. The island's reunification with the mainland has become a core interest of the Communist Party in Beijing.

While Biden administration officials have reemphasized that the US will help Taiwan defend itself, in recent months, the PLA has been stepping up military maneuvers in the Taiwan Strait.

In July, Chinese Foreign Minister Wang Yi accused the US of "trying to take risks on the Taiwan question," calling recent high-level meetings between officials "extremely wrong and dangerous."

"Achieving complete reunification of China is a historical trend and any person or force cannot stop it," said Wang.

"China could probably get away with aggressive action against some small Taiwanese islands, and probably too in the South China Sea, but any serious Chinese invasion of Taiwan would almost certainly bring about US involvement," said analyst Dunst.

"The 'red line' for US involvement in an Indo-Pacific war would be a Chinese military campaign against Taiwan," he added, although this would be a big line to cross.

"China, too, still prefers lower-level action to full-on war, although this could change as China's capabilities improve and Xi Jinping becomes more impatient," he said.

However, for the time being, China's primary strategy in the Indo-Pacific remains leveraging economic pressure to bring countries into its orbit, rather than directly rivaling US-led security guarantees promising a free and open region.

"China offers aid and investment to countries throughout the region, particularly in Southeast Asia, that the US does not," said Dunst.

"Without a US economic plan for the Indo-Pacific, China's efforts on this front will continue to find success," he added.

"Most Indo-Pacific countries prefer to balance the US and China — cooperating with and extracting economic benefits from both — but some have aligned with the United States for fear of Chinese aggression. Australia and India are prime examples," he continued.

Maude said China's leaders are confident that the tide of history is running in their direction.

"Especially in the lead up to the all-important Party Congress next year, China has few incentives to cooperate with the United States or compromise on issues of concern to Washington," he pointed out.

"The challenge for Washington is to convince China that its aggressive turn of recent years will be met with sustained resistance and that the costs for China of its current course will be high. Partnerships like AUKUS and the Quad are central to those endeavors."