US military commanders have warned about the imminent threat of Beijing trying to recover control over the democratic island. But some experts say greater danger lies with China's inconspicuous "gray zone tactics." 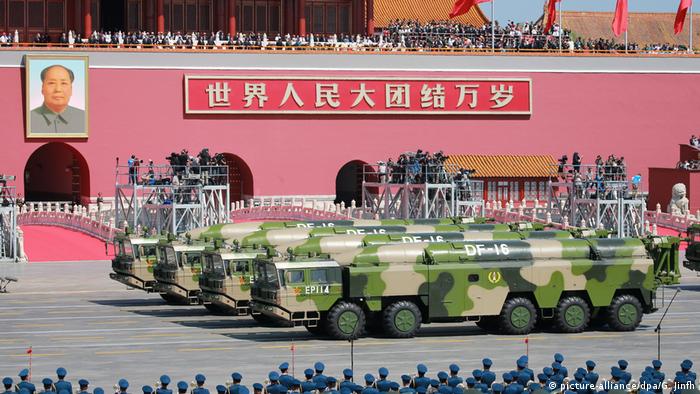 'The most dangerous concern is that of a military force against Taiwan,' says US military commander John Aquilino

A top US military commander has warned that China's threat to invade Taiwan with military force has become more pressing than many people understand, warning that Beijing considers reclaiming control over Taiwan its "number one priority."

"My opinion is that this problem is much closer to us than most think," said Admiral John Aquilino, the Biden administration's nominee for the commander of the US Indo-Pacific Command.

"The most dangerous concern is that of a military force against Taiwan," he stressed during a senate confirmation hearing on Tuesday.

Aquilino called on Washington to adopt a proposed $27 billion (€23 billion) plan to enhance the US' defense in Indo-Pacific "in the near term and with urgency."

"The Chinese Communist Party has generated some capabilities in the region that are designed to keep us out," he warned.

How likely will Beijing invade Taiwan?

Earlier this month, US Commander Philip Davidson of the Asia-Pacific region said he expects China to advance  towards democratic Taiwan "in the next six years."

"I worry that they're [China] accelerating their ambitions to supplant the US and our leadership role in the rules-based international order by 2050," Davidson said during a senate committee meeting earlier this month. "Taiwan is clearly one of their ambitions before that. And I think the threat is manifest during this decade, in fact, in the next six years."

But some experts see a China military attack on Taiwan as unlikely.

"While we shouldn't ignore the risk of a Chinese attack, I believe an attack in the near term is unlikely. It remains a potential action of last resort if the Chinese feel that they have exhausted all their options," Bonnie Glaser, director of the Washington-based China Power Project at the Center for Strategic and International Studies, told DW.

According to Glaser, Beijing has more pressing priorities domestically but thinks nevertheless, that "the biggest threat Taiwan faces in the next couple of years is China's gray zone tactics."

What are Beijing's 'gray zone tactics'?

Over the weekend, more than 200 Chinese vessels were spotted near a reef in the South China Sea that's claimed by the Philippines.

In February, Japan and the US expressed concern over China's new coast guard law which authorizes Chinese coast guard to open fire at foreign vessels in contested waters, including the disputed Senkaku Islands in the East China Sea.

Beijing's latest military actions and decisions have renewed concerns over a militarization of the Asia-Pacific among China's neighboring countries.

According to Glaser, China recognizes its ability to put pressure on other countries through methods that are just below the threshold of triggering military responses from the US.

"If China only intimidates, harasses and bullies other countries, it will be more challenging for the US to respond effectively," Glaser said.

"The ability to use large numbers of coast guard or maritime militia vessels in the East China Sea and South China Sea really ends up strengthening Beijing's sovereignty claims. It also aims at convincing other countries that they shouldn't challenge Chinese interests or they will pay a price," she added.

How is Beijing exerting pressure on Taiwan?

Alexander Huang, a strategic studies professor at Taiwan's Tamkang University, said even though gray zone tactics don't equal to an all-out war, China still exerts a lot of pressure on Taiwan through such methods.

"China's gray zone tactics can put a lot of pressure on Taiwan's combat capabilities, and since it's not an all-out war, it becomes a constant pressure for Taiwan," Huang told DW. "I think Taiwan should pay particular attention to the threats that come with these tactics."

A report issued by the Institute for National Defense and Security Research in Taiwan indicates that Chinese military aircraft made 380 incursions into Taiwan's air defense identification zone (ADIZ) throughout 2020.

For Glaser, such tactics lead Taiwan to ultimately fork out higher costs in the long-run than mainland China.

"Taiwan is paying a lot in terms of stress on its pilots and the maintenance cost on the aircraft," she told DW.

"If pilots are just sitting around and waiting for the time of day when they may have to go scramble, they may be foregoing other kinds of training that's more important. I fear that Taiwan's pilots will end up not getting the kind of training that they need because they are focusing too much hours on this particular mission."

"Ultimately, the Chinese want to use this gray zone pressure to convince the people in Taiwan that they have no choice and they will ultimately have to be part of China," she said.

Last week, Taiwan’s Ministry of National Defense said it plans to respond to the constant air and sea incursions initiated by Beijing through the rapid deployment of "reaction" forces.

How are neighboring countries reacting?

China's growing military pressure on Taiwan has also prompted neighboring countries to adopt a different view on the potential impact of a military conflict across the Taiwan Strait.

Last week, Japanese and US defense chiefs agreed during a meeting in Tokyo that they would closely cooperate in the event of a military clash between Taiwan and China, Kyodo News reported on Sunday, citing multiple government sources.

"The good news is that more countries are paying attention to the potential danger that Taiwan is facing," said Huang from Taiwan's Tamkang University. "The bad news is that maybe the level of danger across the Taiwan Strait is really so high that neighboring countries actually have to pay even more attention to it."

Glaser thinks that the agreement between Japan and the US sends an important signal that Tokyo sees Beijing as an existential threat to Taiwan. "It's not necessarily what we will do if there is a war, but the question is what can we do now in peace time so we can strengthen deterrence," Glaser told DW.

"Once there has been a signal at the high level that the two countries think it's crucial to their national interest to discuss the topic, it opens the door at lower levels for people to have working-level discussions about it. I think we will see more of that take place," she added.