Asia′s ′Milk Tea′ activists give cross-border support for democratic change | Asia | An in-depth look at news from across the continent | DW | 08.03.2021 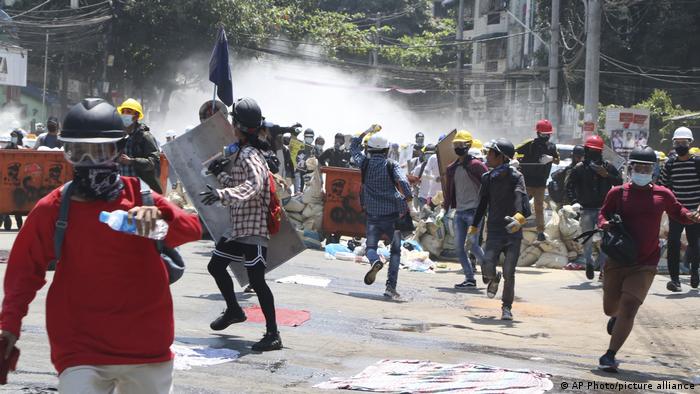 The Milk Tea Alliance is nurturing transnational solidarity with protests such as this one in Yangon, Myanmar, on March 8

Solidarity between pro-democracy advocates has been gaining momentum across Asia in the last couple of months, both in cyberspace and in the streets.

Thitinan Pongsudhirak, a professor of political science at Thailand's Chulalongkorn University, told DW that the growing transnational movement "has aligned the aspirations of young demographics across Asia, favoring democratic norms and values against authoritarianism in their countries and beyond."

How did the Milk Tea Alliance come about?

The pan-Asian coalition started out in April last year as a humorous hashtag after a Thai actor retweeted a photo that categorized Hong Kong as an indedendent country.

Fervent Chinese nationalists lashed out at the outspoken Thai Twitter users, only to have their comments deflected with self-deprecating humor.

Netizens in Hong Kong and Taiwan quickly chimed in on the online spat, and the three nations formed an anti-China front. They dubbed themselves the Milk Tea Alliance — after the popular East and Southeast Asian beverage.

Though it initially emerged as a pushback against China’s dominance in the region, the movement has since widened to represent a larger struggle but with one common cause: fighting authoritarianism.

Myanmar's youth have also taken to the streets to protest against the military's seizure of power in a coup on February 1. Some of the protesters are the latest members of the cross-border network pushing for democracy.

"For many young protesters, joining the Milk Tea Alliance alongside other Asian youth represents a rejection of the closed and authoritarian society the military maintained for decades through violence and terror," Ronan Lee, a visiting scholar at the International State Crime Initiative at Queen Mary University of London, told DW.

More than 50 people have been killed and nearly 1,500 people have been arrested since the Myanmar army ousted the democratically elected government of Aung San Suu Kyi, according to the Assistance Association for Political Prisoners (AAPP) monitoring group.

The Myanmar military — which ruled the country from 1962 for almost five decades — had expected that it would be able to quell the unrest by arresting key politicians and notable activists. However, "this time Myanmar's protests have far more leaders than the military expected and continue [to demonstrate] even after a thousand arrests," Lee noted.

"Diversified leadership structures learned from the Milk Tea Alliance have helped Myanmar’s protesters frustrate military efforts [to crack down on protests]," he added.

From hashtag to pan-Asian movement

In one of the latest displays of transnational solidarity, activists across Asia took to the streets at the end of February in support of Myanmar demonstrators.

Some also answered calls from pro-democracy campaigners to hold online protests by posting photos of themselves showing the three-finger salute — a gesture borrowed from The Hunger Games film trilogy and a symbol of resistance shared with the Thai pro-democracy movement.

"Today we witnessed transnational solidarity across #MilkTeaAlliance. It is no longer just a hashtag. You made it a movement," tweeted the Milk Tea Alliance account on February 28.

As authorities continue to crack down on prominent pro-democracy activists in Hong Kong and Thailand, prospects of any major political shift in the region appear slim.

Professor Thitinan says while the Milk Tea Alliance holds opportunities for further growth, the movement will need stronger coordination efforts to stand up to authoritarian forces.

"The Milk Tea Alliance has potential to catch on as a significant political force across Asia as the younger generations grow up and have more means to carry on political activities. But this requires leadership, coordination, and organization," Thitinan told DW.