In the trade dispute between the US and China, Washington has placed all its bets on one card and is flexing its military muscles, too. It shows just how much Trump feels cornered by China's rise, says DW’s Frank Sieren. 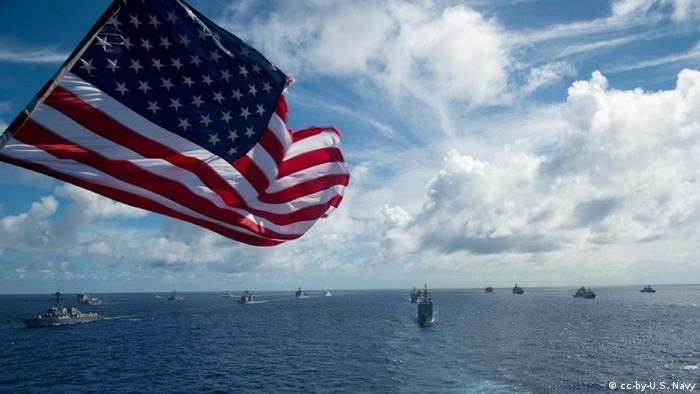 It was a surprising turn of events. The US and China had been expected to resolve their trade dispute, and steady progress had apparently been made. But then, US President Donald Trump decided to hike tariffs on imports from China, from 10% to 25%. "The Trade Deal with China continues, but too slowly, as they attempt to renegotiate," Trump tweeted. "No!"

China's Foreign Ministry announced that it would stick to the schedule and send a delegation to Washington for another round of negotiations. It was a relaxed response. Beijing could easily have canceled the talks after essentially being blackmailed.

"China's positions are clear, and the US side is well aware of them," the ministry said earlier in the week. On Friday, when the tariffs went into effect, the tone got slightly harsher, with China warning that it would not "capitulate to any pressure."

The fact that Trump is not afraid of risking the failure of the talks despite months of negotiations, at such an important moment, is a sign once again of his brutal negotiating style.

But it is also a symptom of a shift of power on the world stage: Washington's room for maneuver is becoming increasingly small and correspondingly the fear of losing is increasingly big. The super power that has been the most important power in the world since the collapse of the Soviet Union is losing ground to China every day. The US feels cornered and is therefore upping the ante.

It makes sense in this context that the US just decided to station another aircraft carrier on the Japanese coast. The USS America — of the LHA-6 class — is a state-of-the-art amphibious assault ship that was developed to support invasions. The announcement was made that "the security environment in the Indo-Pacific requires that the US Navy station the most capable ships forward."

The assault ship can accommodate a fleet of 20 F-35B fighters, various helicopter groups, 1,700 Marines and over 1,000 soldiers. The assault ship will be accompanied by a transporter equipped with state-of-the-art stealth technology which enables it to land without being detected by radars. The Nimitz-class USS Ronald Reagan that has long been stationed in Japan can accommodate up to 85 fighter jets.

Not by chance, the USS Abraham Lincoln, which is also a Nimitz class ship, is currently making its way towards Iran. "The United States is not seeking war with the Iranian regime," US National Security Adviser John Bolton recently said. "But we are fully prepared to respond to any attack, whether by proxy, the Islamic Revolutionary Guard Corps or regular Iranian forces."

China is Iran's closest ally and opposes the sanctions on Iran. Two weeks ago, the Trump administration announced that countries importing Iranian oil would be subject to sanctions.

Washington's decisions were announced just a few days after China's navy celebrated its 70th birthday with a massive naval parade near the port of Qingdao, at which 32 warships and 39 fighter jets were presented.

The country's first aircraft carrier, the "Liaoning," was also presented seven years after being put into service. Constructed from old Soviet components bought from Ukraine 20 years ago, it is hardly a very modern ship and China's two other aircraft carriers are still in the test phase. Therefore, China still has some way to go before it can compete with the US.

But, as was shown at the parade, China's navy is equipping its warships with the latest hypersonic missiles, which have a greater range than the US supersonic missiles which sometimes date back to the Cold War era. The 10,000-ton Nanchang stealth destroyer can detect infantry targets in camouflage. These high-tech war machines are making Washington nervous.

Apart from the recent stationing of a second aircraft carrier on the coast of Japan, the US has also upped its presence in recent months near the disputed Spratly Islands that China lays claim to and in the Taiwan Strait.

Equipped for a naval war

Washington realizes that if there were to be a conventional military conflict between China and the US as opposed to a cyberwar or a nuclear war — neither side would risk the latter — then it will probably be a naval war. China is doing everything to ensure that it, like the US, has efficient carrier battle groups, including submarines, battleships, planes and state-of-the-art satellite technology if need be.

China is building up its navy like no other country these days. But the country will probably not dare launch a naval attack. At the moment, thanks to its economic might, it has cheaper and more efficient methods of increasing its geopolitical power.

It has created a "string of pearls" in the Indian Ocean as part of its "maritime Silk Road"that currently serve its economic endeavors. However, they could enable the Chinese navy to stock up on oil, munitions and other supplies if the situation were to escalate.

Beijing's belligerent stance in the South China Sea can no longer be justified by economic endeavors. It is much more about creating a buffer zone around China. The US rightly sees this as an attack on its hitherto unique position of power in the Indo-Pacific region.

However, since China's neighbors barely ask the US for help anymore it is becoming more difficult for the US to justify its presence in Asian waters.

A naval conflict between one rising global power and one that is losing its influence is at the moment not very likely, but the threat level has increased considerably with the US sending more ships to Asia. And now an indirect conflict has become more possible - a proxy war for Iran for example.

When tectonic plates on the world stage shift, the dangerous parties are often those who have the most to lose because their power is in decline. They are more likely than rising powers to place all their bets on one card. The US military is already developing corvette-sized robotic ships and unmanned submarines, which can run greater risks. The US population is more likely to tolerate the sinking of an unmanned ship, even if the stock exchanges plunge as a result.

Luckily, we are not at that stage yet. But the US's threatening stance towards China and Iran is putting pressure on other world powers.

Donald Trump is clearly torn: On the one hand, he does not want the US to lose its influence but at the same time he has promised Americans that he will bring US soldiers back.

He is equally torn in the trade dispute with China: He would like to resolve it before his voters feel the pinch in their wallets, but he also wants to win. He has raised the stakes and therefore the risks.