Beijing has been making big steps recently toward solidifying a sphere of influence in the Asia-Pacific. Defending these interests will require a buildup of Chinese naval power that could heighten conflict with the US. On November 17, the commander of US forces in the Indo-Pacific, Admiral Philip Davidson, told the Halifax International Security Forum that the US would protect the "viability" of a free and open "Indo-Pacific," a term used in the US for the region.

"The United States is an enduring Pacific power, this will not change. We could not leave it alone if we wanted to," said Davidson.

Earlier this year, however, the admiral said during his confirmation hearing that China is capable of dominating the South China Sea in "all scenarios short of war."

The South China Sea region, and tensions over freedom of maritime navigation and territorial claims, encapsulate the escalating naval and political rivalry in the Pacific between the US and China.

After a recent series of high-level summits and bilateral meetings, it is becoming clear that Beijing wants to take the lead in setting the economic and strategic agenda for the region. A regional rivalry is emerging between China and the US over who is the better partner and which order to follow.

Over the weekend, the Asia-Pacific Economic Cooperation (APEC) summit failed to issue a joint communique, reportedly due to trade and security tensions between Washington and Beijing. Last week's Association of Southeast Asian Nations (ASEAN) summit in Singapore was also marked by harsh rhetoric from the US over China's "aggressive" military expansion in the South China Sea.

Gregory Poling, director of the Asia Maritime Transparency Initiative at Center for Strategic and International Studies (CSIS) in Washington, told DW that Beijing is working to convince other nations in the region that cooperation is more beneficial than opposition.

"If the Chinese can convince the rest of Asia that they've already lost – as they've done with the Philippines – and that the US isn't really invested and inevitably China is going to win, then Asian states will start cutting bad deals because they feel they have no choice," said Poling.

And as China increasingly builds on its influence through loans, infrastructure deals and military capabilities, the option of defending these interests with force inches closer.

Beijing considers the majority of the South China Sea to be its sovereign territory, a claim that is disputed by international law. China's military have been turning what were once small rocks and reefs into heavily fortified remote military installations.

These installations give China a strategic advantage. The installation on the Spratly Islands, for example, has the capacity to deploy fighter aircraft that could control key shipping lanes.

"Right now there are no combat aircraft on the Spratly Islands, but they could have 72 of them out there tomorrow given the hangar space they've built," said Poling.

China has maintained that these facilities are for "defensive purposes" but Poling finds that assertion hard to believe.

"If I build a fighter jet hangar, why would you believe that it is only for defensive purposes?" he said. "The idea that you need 72 fighter jets to defend against the big, bad Philippine air force doesn't make any sense." 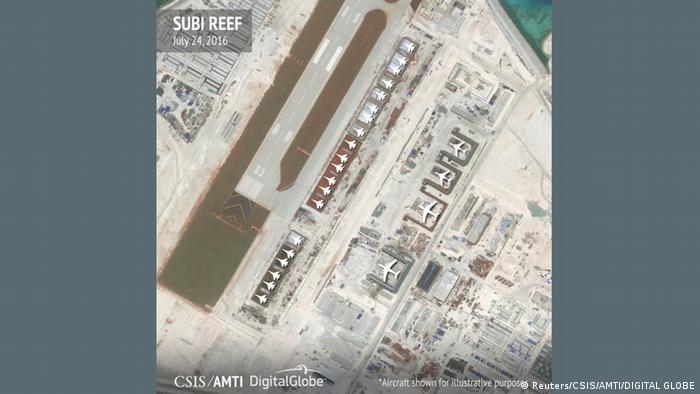 The US Navy frequently conducts so-called "Freedom of Navigation" exercises in the South China Sea, which have recently been creating more and more friction with Chinese forces also patrolling the waters. China has repeatedly demanded that the US Navy cease these operations.

In September, a US destroyer nearly collided with a Chinese destroyer during one of these operations in what was referred to as an "aggressive maneuver."

US naval ships frequently come into contact with Chinese ships in the South China Sea. US Rear Admiral Karl Thomas told the Associated Press on Wednesday in Hong Kong that the majority of interactions out at sea were "very professional" and that the incident was an "unusual and rare occurrence."

"I don't expect that either side wants a conflict in the South China Sea, and I don't think there will be any," said Poling.

"I think there is a good chance of the Chinese winning dominance without ever firing a shot. The US simply isn't invested the way it needs to be to deter that." 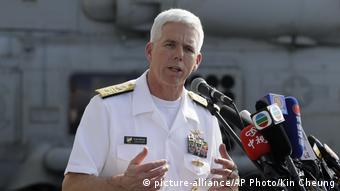 US Rear Admiral Karl Thomas speaks on the aircraft carrier USS Ronald Regan, which was allowed to dock in Hong Kong on Wednesday.

Poling, who leads a team at CSIS analyzing China's militarization of the region, said that China has sent the world a clear signal that they intend to control the South China Sea.

"They took the time, effort and spent considerable treasure to build three military grade airstrips and hangars," he said. "They've built tons of underground fuel storage and ammunition storage capabilities, and all the defenses you would need to protect those."

Last week, the National Defense Strategy Commission, a bipartisan US defense committee, issued a report that said US military superiority has eroded to a "dangerous degree."

"The point of the recent report is that the gap is narrowing," said Poling. "The US isn't losing ground, but China is gaining ground faster. The relative capabilities are getting closer together," he said, adding that China will likely take a few decades to catch up.

"If you look at the 7th fleet, the US Pacific Fleet, and compare it to what China has, in total, China does have an edge in raw numbers," said Poling. "But, if you compare it to the overall US fleet – and presuming in any conflict the US would call in forces from around the globe – the US still dominates in numbers, and more importantly in capability," he said.

Does the US want to defend the Pacific?

A bigger question besides the size of navies and the capability of ships and missiles is if the political will exists in the US to enter into conflict to defend a rules-based order and protect the interests of allies in the "Indo-Pacific" region.

While the US public has expressed support for defending treaty allies against Chinese aggression, issues like defending a the international order in the South China Sea are less likely to generate public support for a potentially catastrophic conflict with China.

"It seems that Americans would back Japan or Korea in the case of a Chinese invasion," said Poling. "However, with the South China Sea, where it's not about Chinese tanks rolling into Tokyo, US interests are not easily communicated."

"My concern is less over who has the most boats and planes; it's about who is willing to put skin in the game," he added.

If the US is to maintain a leadership role for other nations around the South China Sea and father afield in the Pacific, it needs to maintain healthy alliances, something that China doesn't currently have, but is attempting to build.

In October, militaries from the Association of Southeast Asian Nations (ASEAN) and China conducted joint naval drills for the first time and China has been pushing for a so-called "code of conduct" with ASEAN countries in the South China Sea. China has attempted to insert text into the code of conduct, which alludes to the US Navy, prohibiting "military exercises with countries from outside the region."

And as the US under President Donald Trump sends conflicting messages of both engagement and isolation, Washington's allies in the region are not sure which side to turn to. During last week's ASEAN summit, Singapore's President Lee Hsien Loong said the US-China rivalry was forcing allies of both countries to "awkwardly" choose sides.

"US interests are protected by alliances and partnerships, and that is a great strength the US has that the Chinese don't," said Poling. "You can't throw that overboard and just say you are going to draw a line down the center of the Pacific."