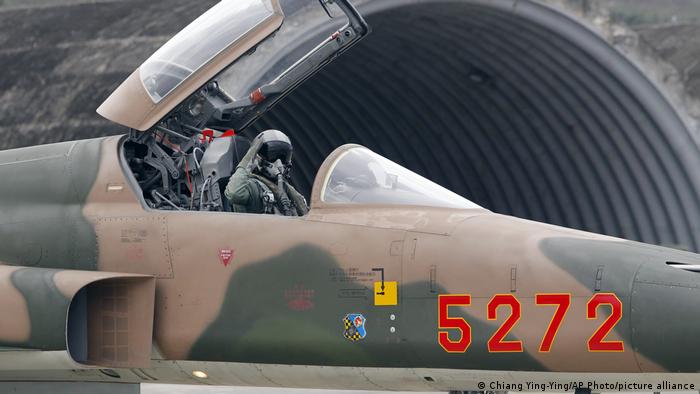 Those who have been following the news about China's threats toward Taiwan might be surprised to see how little visible impact the situation seems to be having on the everyday lives of the island's 23 million inhabitants.

It is business as usual in the cities, hectic moments alternating with calmer ones. Moreover, thanks to the fact that the authorities have dealt with the coronavirus in a very efficient manner, there is no physical distancing or lockdown.

There are also few uniforms on the streets, no regular drills or military exercises. It seems citizens trust that their government and army are well prepared or are otherwise confident that the situation will not escalate.

After all, the Taiwanese are used to living in the shadow of an ongoing latent conflict. Ever since the Chinese Nationalist Party, or Kuomintang, lost the Chinese civil war and fled to Taiwan in 1949, the Chinese Communist Party has wanted to take control.

The calm could be deceptive. It is completely unclear what China is really planning and whether the US would intervene on Taiwan's behalf if necessary. China is arming itself and increasing the military pressure on Taipei. Last year, the Chinese air force ignored the Taiwan Strait median line, which acts as an unofficial dividing line, more often than it had in decades, with aircraft entering Taiwan's air defense identification zone (ADIZ) almost every third day. China claims Taiwan as its own territory.

"We are facing a gigantic military threat," said former Taiwanese Defense Minister Michael Tsai, who turned his back on the ruling Democratic Progressive Party (DPP) in 2019. "Taiwan should strengthen its self-defense capabilities."

At the National People's Congress in March, mainland China's Communist rulers made clear how important Taiwan was for their strategy. Foreign Minister Wang Yi said that there was "no room for compromise or concessions" on the issue. He also warned that the US to stop "playing with fire."

At the moment, it seems as if US President Joe Biden, like his predecessor Donald Trump, will continue to support Taiwan, which is of major geostrategic importance in the Western Pacific region. When Chinese President Xi Jinping called on the People's Army to be ready for battle, the word "Taiwan" was not uttered - but the idea hung in the air. 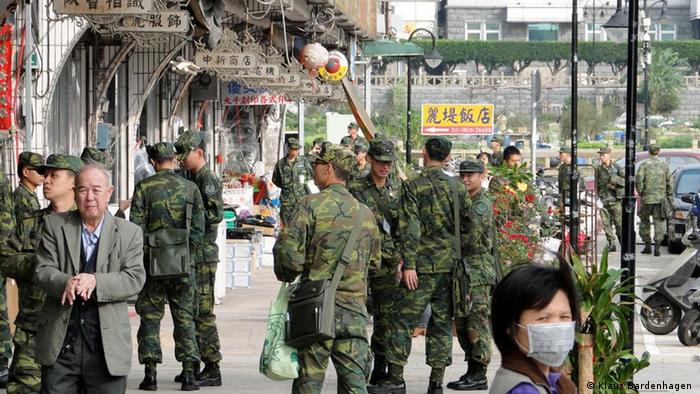 Unlike on the Taiwanese main island, soldiers are a common sight on the Matsu islands

The morale and training of the Taiwanese army will probably play a major role in determining whether Taiwan really is ready to defend itself in an emergency. But both in terms of troop numbers and modernization, Taiwan is well behind China, despite regular arms supplies worth billions from the US.

China's official military budget alone is 16 times that of Taiwan's. In terms of size, Taiwan's 170,000-strong army is comparable with that of Germany, which boasts three and a half times as many inhabitants. At sea, China definitely has the upper hand: It is in the process of building a third aircraft carrier while Taiwan has two operational submarines, which date back to the 1980s.

"Our national security needs every young man to go to the armed forces, this is a national obligation," said Tsai, who did his own 18-month stint of military service six decades ago. The army has played a much more limited role in Taiwan since martial law was lifted in 1987 and democracy was introduced. In 2016, military service, which young men usually complete after their studies, was shortened to four months, but Tsai does not think this is long enough. He told DW that Taiwan should take a cue from South Korea, Singapore and Israel, where military service lasts considerably more than a year.

Wen Lii, director of the Matsu Islands chapter of the Democratic Progressive Party (DPP), was conscripted when he turned 24 in 2013. He served for a year and learned how to drive M60 tanks, which in the event of a Chinese invasion are supposed to repel Chinese troops on the beaches. Lii, who is now a reservist, said that there was no tactical combat training or maneuvers, however: His job was simply to teach new recruits how to drive.

"Today's technology and equipment is highly professionalized," said Lii. He said that it made sense for professional soldiers to play more of a role than conscripts. He explained that the army had become more attractive as a career in recent years. On the Matsu Islands, fortifications and soldiers are still omnipresent, even if they are fewer than during the Cold War.

All the more reason to train reservists regularly, he added. Taiwan officially has over 700,000 whose task would be to support the troops in case of war. However, few people have any illusions about their willingness to fight.

At the moment, reservists are called up every two years for a maximum of seven days, and often this is just on paper. Lii said that he had only been required to turn up twice, for one day. "Personally I wanted to spend longer time for training," he said, before welcoming the fact that the government wanted to reform the army reserve by introducing two weeks' training per year from 2022 onwards.

The journalist Paul Huang, a vocal critic of the current state of Taiwan's army, which he described in Foreign Policy magazine as a "hollow shell," believes that "Taiwan's military is in a crisis it can barely admit exists." Citing active and former soldiers, he found that the army's strength was only on paper and that equipment was often not satisfactory.

He told DW that the root of the problem lay with Taiwan's military culture and a tendency to ignore problems. He added that he followed similar discussions about the German army with interest. "The Bundeswehr at least knows about where to start fixing the problem," he said. "Taiwan's Ministry of Defense always says they have no problem whatsoever, everything is working, everything is fine. Even when reports surface that is not the case. They do not want to face the reality."

He attributed this to the fact that defense ministers in Taiwan were often generals and this led to problems of accountability.

"Most military leaders would not like civilians to be Minister of Defense," agreed Michael Tsai, who was a rare exception. The next civilian after him to become defense minister had to step down after less than a week in office after being accused of plagiarism.

However, he still believed that the army could be reformed if there was the necessary political will: Focus on reforming the military, restore civilian audit and control, that should be number one," he said. "Reform from the top down before thinking about what to throw money at."