US concerned after Chinese warplanes fly over Taiwan airspace

Taiwan and the US have warned China after it flew nuclear-capable bombers and fighters over Taiwanese airspace. The US has urged China to stop pressuring Taiwan. 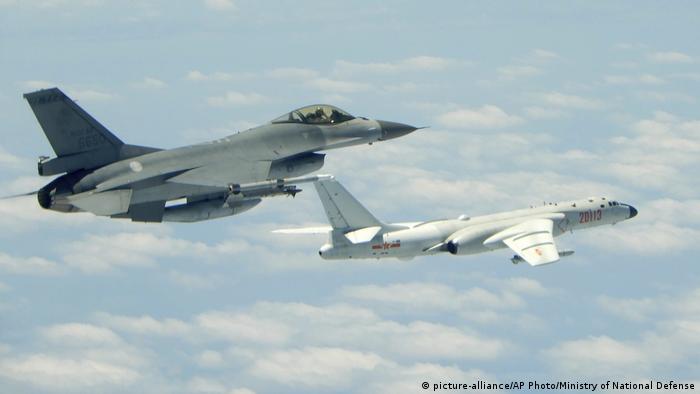 China regularly breaches Taiwanese airspace, but rarely with such a large number of aircraft

A total of six J-10 fighters, four J-16s, two SU-30s, a Y-8 reconnaissance aircraft and two Y-8 anti-submarine aircraft, were sent by China, the ministry said in a statement.

Taiwan's air force was sent up to respond, the statement said.

China, which continues to claim Taiwan as its own territory, in recent months has conducted almost daily flights over the waters between the southern part of Taiwan and the Pratas Islands.

However these flights have generally consisted of only one or two reconnaissance aircraft. The presence of so many Chinese combat aircraft on this mission — including an anti-submarine aircraft, eight H-6K bombers, and four J-16 fighter jets — is unusual.

A map provided by Taiwan's Defense Ministry showed that the Chinese aircraft flew over the same waters where the most recent Chinese missions have been taking place, well away from mainland Taiwan.

News of the incursion brought a swift statement from the US State Department, urging China to stop pressuring Taiwan while reaffirming its commitment to the nation.

"We urge Beijing to cease its military, diplomatic, and economic pressure against Taiwan and instead engage in meaningful dialogue with the nation's democratically elected representatives," said State Department spokesman Ned Price.

"We will continue to assist Taiwan in maintaining a sufficient self-defense capability," he continued.

Though there was no immediate comment from China, in the past leaders there have said it will continue to carry out exercises to defend the country's sovereignty and security.

The incursion on Saturday occurred just days after Joe Biden assumed the US presidency.

Chinese military aircraft once again flew over Taiwan's territory, issuing warnings from the US as well as Tapei