Beijing has warned that "those who play with fire get burned" as the US launches its highest level visit to Taiwan in decades. Taiwan scrambled fighter jets as Chinese planes buzzed the island. 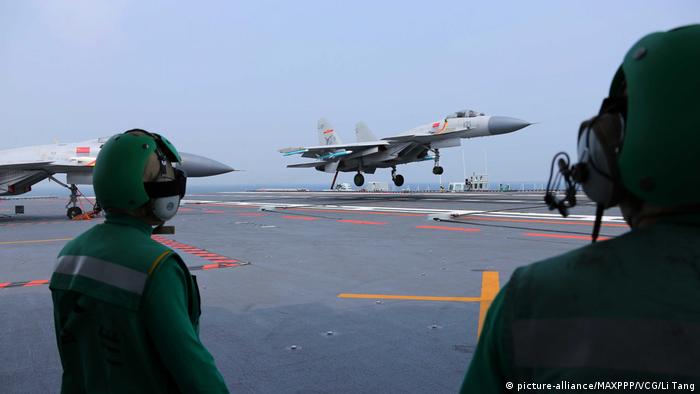 China launched military exercises near the Taiwan Strait on Friday as a senior US diplomat started a three-day visit in Taipei.

The high-level meeting between the US and Taiwan inflamed tensions with China, which claims sovereignty over the democratic island nation.

In response, Beijing has launched several combat maneuvers near Taiwan, including two days of mass air and sea drills last week. Details of Friday's exercises were less clear, but China said they would take place near the Taiwan Strait and would involve the People's Liberation Army's eastern theater command.

Taiwanese presidential spokesman Xavier Chang told reporters that the armed forces were in control of the situation, and told residents not to be alarmed. He urged China to show restraint.

Chinese Defense Ministry spokesman Ren Guoqiang said: "They are a reasonable, necessary action aimed at the current situation in the Taiwan Strait and protecting national sovereignty and territorial integrity."

He added that Taiwan is a domestic affair for China and does not warrant foreign interference.

Attempting to "use Taiwan to control China" or "rely on foreigners to build oneself up" was wishful thinking and destined to fail.

"Those who play with fire will get burned," Ren said.

US Secretary of State Mike Pompeo accused China of "military blustering" with their military exercises.

"We sent the delegation to a funeral and the Chinese have apparently responded by military blustering. I'll leave it at that," said Pompeo during a visit to Guyana.

What is the significance of the US-Taiwan talks?

China-US relations have hit their lowest point in decades, with frequent clashes over trade, military and security issues and more recently the coronavirus pandemic.

In the closed-door meeting with Krach, Taiwan's Premier Su Tseng-chang said the US was one of Taiwan's most important economic and trading partners, according to a statement released late Friday. 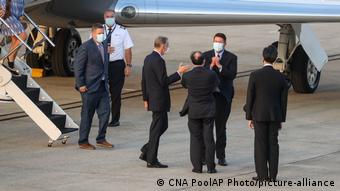 Undersecretary Krach is the highest-ranking State Department official to visit Taiwan in 40 years, which has ruled itself since the end of a civil war in 1949. Washington has been stepping up its outreach to Taipei under the Trump administration, with US Secretary of Health and Human Services Alex Azar visiting last month.

Joseph Wu: 'Taiwan is determined to play a role in international organizations'

Ahead of Krach's visit, US Ambassador to the United Nations Kelly Craft met with Taiwan's top official in New York. She said it was the first meeting between a top Taiwan official and a US ambassador to the UN since 1971, when China's UN seat was passed from Taipei to Beijing.

"I'm looking to do the right thing by my president, and I feel that he has sought to strengthen and deepen this bilateral relationship with Taiwan, and I want to continue that on behalf of the administration," she told The Associated Press.