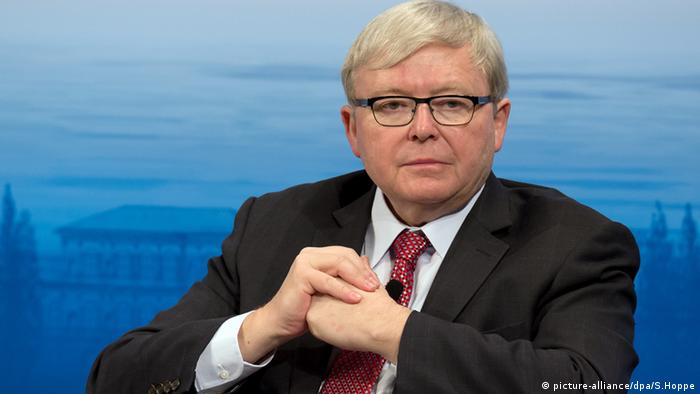 DW: This week, the United Nations kicked off the annual General Assembly. Over the last few years, we have begun to see the global multilateral system face some challenges in functioning effectively. Under such circumstances, how do you think democratic countries should work together?

Kevin Rudd:I recently wrote about the importance for a coalition of democratic states to triage the global multilateral system. At present, the multilateral system is being undermined by two major factors. One is the emerging split on most multilateral bodies between the US on the one hand, and China and Russia on the other.

The multilateral system is also undermined by the unilateral withdrawal of the United States from institutions like the WHO and the UNHRC in Geneva. Ironically, it is the Americans who created these institutions in the first place.

For the future, what is necessary, until we achieve a new equilibrium between China and the United States, is for those other major democracies, including Germany, to become major institutional, financial and policy supporters of the UN multilateral system. It's to put their collective shoulders to the will through an integrated strategy to support the functioning of the multilateral system. Otherwise, there is a great danger that the multilateral system will collapse on itself.

There has been some discussion about a possible new Cold War breaking out between the US and China. What is your assessment?

I wrote about the subject and I didn't describe it as "Cold War 2.0." I described it as "Cold War 1.5." The reason I did that is because it's qualitatively different from the Cold War we saw between the Soviet Union and the United States.

The differences are that the Chinese and the Americans are not threatening each other every day with mutually assured nuclear destruction. They are not guiding proxy wars in third countries like what the Soviet and the United States did.

Unlike the original Cold War, where there was no economic contact between the Soviet Union and the United States, China and the US now have a comprehensive economic engagement in trade. They also have contact in other sectors like financial markets, technology and in talent markets until recently. Each of those is beginning to fragment. We need to be clear in our analytical lens about what is similar and what is different.

China has been trying to influence Australia on different fronts over the last few years. In your experience, how should a democratic country like Australia deal with these challenges?

We need to understand China's global strategy. Very few Western governments go through a disciplined intellectual process of understanding precisely what interests the Chinese government is seeking to pursue and how they are going about pursuing them.

The first thing that foreign democratic governments should do is to familiarize themselves in depth with China's operational strategies towards their particular country. After all, that's what China does in relation to the rest of us.

The second is to take appropriate national measures to protect your vital institutions and therefore arrange your categories, including cybersecurity. But it also deals with institutional security as well as security of people's personal information. There are a range of protective defensive measures that foreign governments should consider and adopt in the same way that China does in relation to its own security against foreign influence.

The cornerstone to all of this is for Western governments to do their own hardnose analysis about what China's interests are, how it impacts their particular country and what they should do about it. In responding, it is ideal for them to do so in concert with other democracies.

The reality is that the Chinese regime for press and its social media control has been tightening over the last seven years in a big way. This was clear almost in the first six months since Xi Jinping became Chinese leader.

The writing has been on the wall for a long time that there will be a roll back against foreign media coverage. This would be manifested both in terms of China's ability to project its own narrative internationally beyond China's border, but also to influence the narrative deployed by international media based in China.

This is not specific to Australia, Germany or the United States. It's generic and it's become sharper and sharper. In the implementation of this, what you see is the greater assertion of power and control by the instrumentalities for ideology, propaganda, security, intelligence and some politics prevailing over the traditional influence of a foreign policy establishment, which has always thought to balance party concerns against China's international reputation.

In the case of the two Australian journalists, it seemed like they were not specifically targeted by the Chinese government due to their coverage. Beijing said the expulsions were related to Australia investigating Chinese journalists and canceling Chinese academics' visas. Does this indicate that foreign journalists in China might become victims of diplomatic tension?

There are multiple factors at work here. I just described one set of factors, which is the tightening in media and propaganda control at home and abroad. The second factor, of course. is China's retaliatory approach towards what it perceives to be the hostility of other governments.

In the case of the recent return of the two Australian journalists to Australia, the reality is we don't know all the facts yet. What is troubling is the Australian government so far hasn't made a definitive statement about the circumstances surrounding the alleged interviews of the Chinese state media representatives in Australia and the reasons for it.

I think it'll be useful if the Australian government made a statement about that and we may have some basis for making a judgment as to whether the actions taken against the Australian journalists were related to that or whether it was directly related to the third incident involving a third Australian citizen Cheng Lei.

The truth is at this stage, it's unclear what the Chinese motivation or practice were in holing in both Birtles and Smith for compulsory interviews and for temporarily banning them from leaving China. We are waiting for clarification from the Australian government on that.

Now that there are no journalists from Australian media based in China, how challenging will it be for the Australian general public to understand the situation in China?

Securing objective information about China domestically has always been problematic. It's a very simple principle. The more analytical reports you have on what's going on in China in a given time, the better it's likely to be, because everyone will likely get one slice of the reality that very few people will get the total slice of the reality.

I think in those terms it's a loss, but, alternatively, there are many good international outlets or services working hard and in a focused way on China. Additionally, it is also possible to gain insights by remotely looking at the Chinese media and the Chinese social media, or gaining information through Hong Kong or Taiwan as well. There are huge analytical efforts that go into understanding China even though some of it will also be skewed.