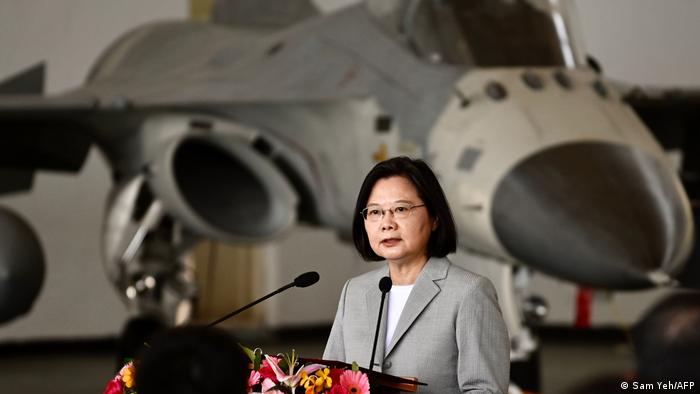 During a visit to an airbase in the Taiwan Strait, leader Tsai Ing-wen condemned China for its recent military incursions into Taiwanese territory.

"How can we let others show off in our territorial airspace?" President Tsai asked on Tuesday.

"Our men and women in uniform have the will and ability to defend Taiwan and are not intimidated by the PRC's [People's Republic of China] intrusions in our airspace. We are dedicated to maintaining peace and stability in the region," added Tsai in a tweet.

China considers Taiwan part of its territory, despite the island governing itself since 1949. China dislikes foreign countries maintaining diplomatic relations with Taiwan as an independent state.

Speaking at the airbase on the Penghu islands that are situated in the 160-kilometer-wide (99.5 miles) strait, Tsai said she has confidence in the air force's determination to protect the nation's airspace.

China 'must back off'

Chinese Foreign Ministry spokesperson Wang Wenbin called the Taiwan region an inalienable part of China's territory on Monday, and said the so-called "median line" — referring to the strait's midpoint between China and Taiwan — does not exist, according to China's state-run Xinhua News.

"I call on the international community to condemn the CCP for its dangerous and provocative words and deeds threatening peace... China must back off," he added in a tweet.