US senators visit Taiwan, in trip that may irk China

A team of bipartisan US senators has arrived in Taiwan, and is expected to meet President Tsai Ing-wen later. The US will give 750,000 doses of COVID vaccines to the island, they said. 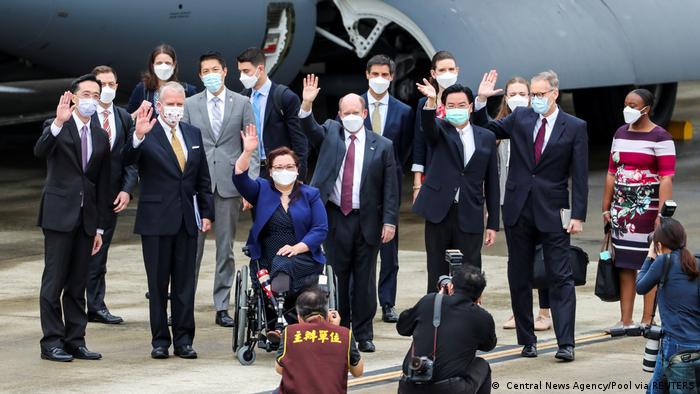 The US will give Taiwan 750,000 doses of COVID-19 vaccines, US senators visiting the island said

Three US senators arrived in Taiwan on Sunday, and are scheduled to meet with President Tsai Ing-wen, in a move that is likely to draw sharp criticism from China.

The bipartisan team, including Democrats Tammy Duckworth, Christopher Coons and Republican Dan Sullivan, are visiting as part of a larger trip to the Indo-Pacific region. The group arrived at the Taipei Songshan Airport in the island's capital, and were greeted by Taiwan's Foreign Minister Joseph Wu and Brent Christensen, director of the American Institute in Taiwan.

Taiwan under lockdown amid biggest COVID-19 outbreak yet

The US has no formal diplomatic ties with Taiwan, but Washington is Taipei's main international backer.

The senators announced that Taiwan would be getting 750,000 doses of coronavirus vaccines as part of the first tranche of US donations. "It was critical to the United States that Taiwan be included in the first group to receive vaccines because we recognize your urgent need and we value this partnership," said Duckworth. 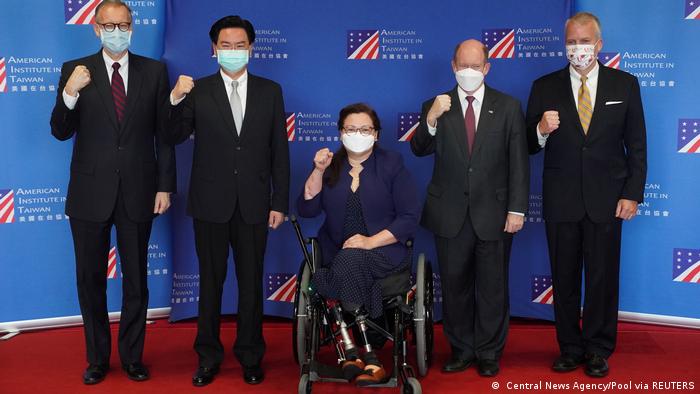 The bipartisan team, including Democrats Tammy Duckworth, Christopher Coons and Republican Dan Sullivan, are visiting Taiwan as part of a larger trip to the Indo-Pacific region

Taiwan, which was not badly affected by the pandemic last year, is currently going through a spike in cases. The territory is also facing a shortage of vaccines. Only 3% of its 23.5 million population has been vaccinated so far.

Taipei has accused China of blocking it from making a deal to procure doses from German firm BioNTech, but Beijing has denied the accusation. "We are no strangers to that kind of obstructionism," said Wu.

Thanking the US for its donation, Wu said, "we must overcome obstacles to ensure that these life-saving medicines are delivered free from trouble from Beijing."

Beijing has offered Chinese vaccines to Taiwan, but the island cannot accept them before overturning a law that bans pharmaceutical imports China. Taiwanese authorities have also expressed concerns about the safety of vaccines made in China.

Taiwan and China split amid civil war in 1949, and Beijing views the island as a renegade province and vowed to reunite it with the mainland, even by force if necessary.

China's growing military capabilities and increased activity around Taiwan in recent years have raised concerns in the US, which is legally bound to ensure Taiwan is capable of defending itself.

A United States Navy warship's passage through the contested South China Sea has stoked tensions between the US and China.