Why are Taiwanese skeptical of Chinese vaccines?

Only about 1.3% of Taiwan's population has received a first dose of a COVID-19 vaccine. The sharp rise in infections on the island has renewed debate on whether it should allow importing vaccines from mainland China. 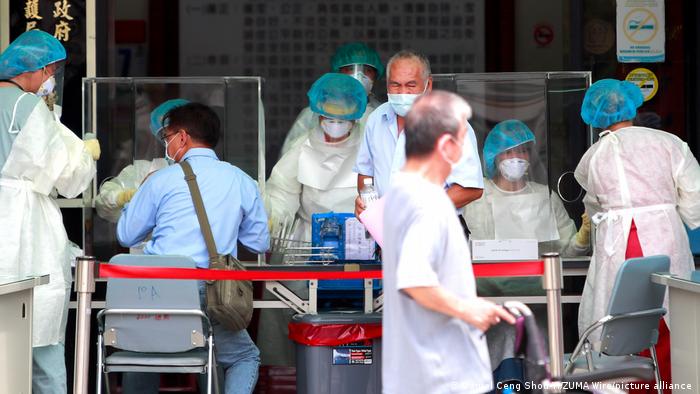 An opinion poll in Taiwan showed that only 1.3% of the respondents would choose COVID-19 vaccines from China

Until a few weeks ago, Taiwan's success in preventing a major community outbreak amid the global coronavirus pandemic was lauded by countries around the world.

But over the last two weeks, thousands of new domestic cases have emerged across Taiwan, forcing the government to raise the nationwide COVID-19 alert while trying to ensure there are enough medical resources to cope with the rapidly rising number of patients.

Despite having successfully prevented any major community outbreak over the last year through strict border controls and stringent regulations related to mask-wearing and social distancing in public places, Taiwan has struggled to secure enough coronavirus vaccines for its citizens.

As of this week, Taiwan has secured less than 1 million doses of vaccines for its 24 million people.

Taiwan's only available COVID-19 vaccine at the moment is that of Oxford/AstraZeneca. It has so far received some 726,000 doses of the vaccine via the COVAX global sharing scheme and from the manufacturer itself.

But the Oxford vaccine's rare side effects, such as blood-clotting, have been cited as one of the reasons why many Taiwanese were hesitant about receiving the vaccine.

Due to the limited number of shots available, Taiwan has also struggled to enhance its overall vaccination rate amid its worst community outbreak since the start of the pandemic last year.

As of Wednesday, only 319,665 people had received their first dose of the COVID-19 vaccine — about 1.3% of its entire population.

The lack of vaccines has renewed the debate over whether Taiwan should consider allowing importing vaccines from mainland China. Such imports are currently banned in the island under the Regulations Governing Permission of Trade Between Taiwan Area and Mainland Area.

China considers Taiwan its own territory and rejects any references that imply Taiwan is a separate
country.

Shanghai Fosun Pharmaceutical Group recently expressed willingness to provide Taiwan with BioNTech-Pfizer COVID-19 vaccines, but the proposal is yet to receive a positive response from the Taiwanese government.

The company has signed a deal with German vaccine manufacturer BioNTech to exclusively develop and commercialize the vaccine developed using BioNTech's mRNA technology in China, Hong Kong, Macau and Taiwan.

On May 26, Taiwanese President Tsai Ing-wen accused China of blocking a deal between Taiwan and BioNTech.

"As for Germany's BioNTech, we were close to completing the contract with the original German plant, but because of China's intervention, up to now there's been no way to complete it," she said during a meeting of the ruling party, the Democratic Progressive Party.

However, opposition parties have questioned the government's lack of initiative to respond to offers of more COVID-19 vaccines from companies like Fosun.

"Instead, they should be actively acquiring more vaccines for Taiwanese people," Ho said.

The Chinese government has offered to help Taiwan to deal with the current outbreak by sending over more COVID-19 vaccines.

On May 24, China's Taiwan Affairs Office said it had repeatedly offered to help Taiwan and claimed that certain groups and people in Taiwan have been calling for the purchase of Chinese vaccines.

"Our attitude is very clear: we are willing to make arrangements quickly so that the vast majority of Taiwan compatriots will have mainland vaccines to use as soon as possible," the office said.

"If necessary, we are also willing to actively consider sending epidemic prevention and control experts to Taiwan, to share anti-epidemic experience with Taiwan's medical and health professionals," it added.

"Every time Taiwan's internal epidemic heats up, [China] criticizes our government for obstructing the import of mainland vaccines," said Taiwan's Mainland Affairs Council in a statement to Reuters news agency.

An opinion poll conducted by the Global Views Monthly in Taiwan revealed very few people in Taiwan are willing to receive COVID-19 vaccines from mainland China.

The February poll showed that only 1.3% of the respondents would choose COVID-19 vaccines from China.

Health experts also have concerns about the effectiveness and safety of vaccines from the mainland, citing China's poor track record of complying with Good Manufacturing Practice (GMP) regulations.

"Usually, the approval of a vaccine should ensure that the manufacturing process and the delivery process of the vaccine meet the existing requirements," said Ho Mei-Shang, professor at the Institute of Biomedical Sciences at Taiwan's Academic Sinica.

"So far, we can't monitor any of the processes mentioned above, so I don't think Taiwan's Food and Drug Administration will do something that they think is risky," Ho told DW.

Will the US give Taiwan vaccines?

While Taiwan has effectively ruled out the possibility of importing Chinese vaccines to solve its problem, it is looking to the United States for vaccines.

Taipei hopes Washington will allocate part of the 80 million COVID vaccines that it plans to distribute to countries worldwide for Taiwan.

However, on May 26, the top US diplomat in Taiwan, Brent Christensen, said Taiwan's infection numbers remained low and that the US is still drafting the criteria that will be used to determine how to ration the millions of doses of vaccines. Christensen said he was confident that Taiwan could control its spike, adding that the US and Taiwan were in talks over vaccines.

Chi Chunhuei, the director of the Center for Global Health at Oregon State University in the US, said since the scale of Taiwan's current outbreak is small when compared to other countries, it would be difficult for the US government to openly promise Taiwan a certain amount of the vaccines.

"The Biden administration can only do that secretly because otherwise, they will be criticized for favoring Taiwan when there are other countries having way more serious pandemic situations than Taiwan who desperately need vaccines," Chi told DW.

"Politically, Taiwan can't expect the US government to pledge to give Taiwan a certain portion of the vaccine, but under the table, Taiwan should do everything they can to get the promise from Washington," Chi said.

Relying on vaccination is "a bit too late and too slow, so Taiwan must resort to other measures such as community control," Chi said, but added: "We need vaccines for the near future, so we will never get into this kind of outbreak again."

No 'need to panic'

According to Taiwan's Central Epidemic Command Center, the island can expect to receive 2 million more COVID-19 vaccines in June, and by the end of August, it can expect to have up to 10 million doses, including some vaccines manufactured by Taiwanese pharmaceutical companies.

Professor Ho said ideally Taiwan's vaccination rate needs to reach 50% or 60% to flatten the curve of the current outbreak, but she added that the island doesn't "need to panic too much."

"The right thing for us to do is to follow the existing protocols," she said.