After successfully containing the pandemic for more than a year, Taiwan is now facing its worst local outbreak yet. Authorities have closed borders and businesses to stop the spread. 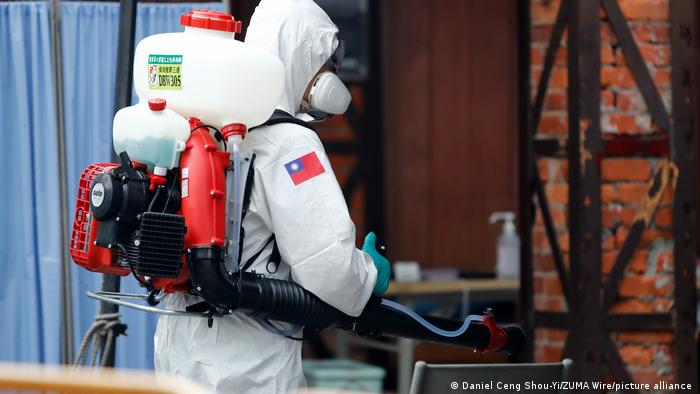 A COVID testing center is sanitized in Taipei this week

Taiwan this week is imposing its strictest restrictions on public life so far since the start of the coronavirus pandemic, following days of rising case numbers.

Throughout the pandemic, Taiwan has been praised as one of the world's few COVID success stories, having kept its total number of cases in the hundreds.

However, over the past several days, Taiwan has reported more than 900 new locally transmitted COVID cases.

On Monday alone, Taiwan reported 335 new cases, a record daily high. The vast majority of the new cases are concentrated in the capital Taipei, and the surrounding New Taipei City region.

How is Taiwan responding?

Authorities are now trying to identify the source of several clusters responsible for the unprecedented outbreak. To contain the spread, the Taiwanese government introduced a series of new measures.

Last week, Taiwan's Health Minister Chen Shih-chung warned during a press conference that Taiwan is facing a serious situation, and raised the alert level in Taipei.

Since May 15, all bars, clubs and gyms around Taiwan have been closed and a mandatory mask policy is in place. The size of indoor and outdoor gatherings has been limited.

On Tuesday, Taipei and New Taipei City announced closures of all schools from kindergarten to high schools for two weeks.

Several universities have also moved their classes online and businesses have also been urged to allow employees work remotely.

Taiwan also closed its borders to foreign visitors without a residence permit for at least one month.

On May 17, New Taipei City Mayor Hou You-yi raised the city's alert level and warned that people or businesses violating protocols will be penalized.

What has caused Taiwan's COVID outbreak?

The latest outbreak in Taiwan comes after a COVID case cluster broke out at a quarantine hotel near Taiwan's airport last month.

Authorities later found out that the hotel had been mixing airline staff quarantining at the hotel with regular visitors in the same building. A few weeks after that, other local cases began to emerge in several parts of Taiwan.

The number of cases quickly went from single to triple digits within a week, prompting health officials asking people not to leave their houses or make unnecessary travel plans.

Taiwan's initial success in containing the virus allowed life in Taiwan to return to relative normalcy since last year.

However, there is concern that Taiwan's success in containing COVID, means it lags behind on keeping up-to-date with the latest knowledge on pandemic prevention.

"The successful control quickly led Taiwanese people into what I called post-pandemic mode, largely living a very normal life," said Chi Chunhuei, the director of the Center for Global Health at Oregon State University in the United States.

Chi believes authorities somehow "neglected the need to catch up with the new knowledge the world discovered over the last year."

"Taiwan needs to quickly adjust the preventative measures, and I think the move to raise the warning level is a good move," he said.

Taiwan needs to 'launch an offensive' with vaccines

Other experts think that as the number of cases continues to rise in Taiwan, the government should consider adjusting its coronavirus testing strategies.

Taiwan has begun to set up rapid testing stations near some epicenters of the current outbreak, and health authorities said they plan to increase the number of these locations over the next few weeks.

Jason Wang, director of the Center for Policy, Outcomes and Prevention at Stanford University in the US, said that Taiwan's app-based digital contact tracing system should be updated to allow people who have come in contact with the virus an easy way to get tested.

"The government should also be able to ask them to go into quarantine if they test positive," he told DW.

Chi Chunhuei from Oregon State University added that Taiwan needs to pick up the pace on vaccinations, especially high-risk groups that include airline staff.

"Since Taiwan was so successful, most of the government officials and the general public didn't feel the urgency of getting vaccinated," Chi said.

"Last year, Taiwan did really well with a very strong defense, but in order to win the game, they need to launch an offensive, which is vaccination."

According to official numbers, Taiwan has only vaccinated about 1% of its population so far. The priority has been high-risk groups like the elderly, medical personnel, and other emergency workers.

A small number of other people have also been vaccinated through a self-paying program.

While vaccinations lag, Chi said that over the next few weeks, the top priority for Taiwan is to impose stricter indoor gathering regulations.