How Taiwan beat China to be Asia′s top-performing economy | Business | Economy and finance news from a German perspective | DW | 26.02.2021 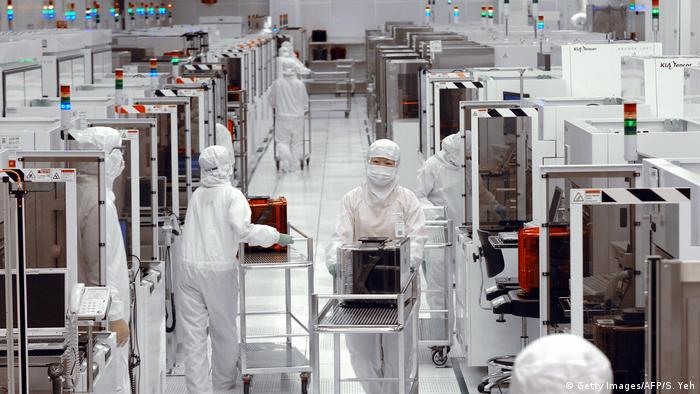 The world gasped in amazement at China's impressive 6% to 11% annual GDP growth over the past decade as the People's Republic became a truly global powerhouse. Last year, however, the coronavirus pandemic wrecked that incredible trajectory, leading to China's slowest expansion since 1976 at just 2.3%.

Instead, the region's top-performing economy was Taiwan, the contentious territory that China sees as its own, which saw economic output expand by 3.11%. The island, which was widely praised for its handling of the health crisis, also benefited from demand for its technology during global lockdowns and the subsequent trade rebound.

"Taiwan is one of the very few economies that still posted positive GDP growth in 2020," Angela Hsieh, regional economist at Barclays Asia Pacific, told DW. Hsieh pointed to "exceptionally strong exports" and singled out the island's semiconductor sector which grew 22.1% versus 5.6% for South Korea.

The pandemic sparked major supply chain and logistics disruption around the world, which initially dramatically slowed global trade. But then Taiwan's semiconductor industry, which provides the microchips that are used in computers, smartphones, games consoles and electric vehicles, got a boost from the shift to remote working.

Demand was so strong, it spurred a global shortage that is likely to continue throughout 2021.

Taiwan Semiconductor Manufacturing Company (TSMC) is the world's third-largest semiconductor firm and alone accounts for more than 50% of the global contract chipmaking market, according to Seeking Alpha.

Another reason for Taiwan's economic prowess last year was itshandling of the COVID-19 pandemic. When the coronavirus first emerged in Wuhan, Taiwan implemented tough containment measures. Flights were restricted, widespread testing and quarantining was implemented, along with an effective track-and-trace program.

To date, just nine people have died from COVID in Taiwan and the island has seen less than a thousand cases.

The successful response helped the economy bounce back quickly, when regional competitors were still facing several production delays and had to account for tighter social distancing rules. Taiwan, on the other hand, was seen as a reliable alternative amid a sudden rebound in global demand and was able to deliver rush orders to clients, Hsieh said.

While Taiwan is unlikely to beat China for GDP growth in 2021, the economy is expected to grow by 4.6%, according to the territory's statistics bureau. The World Bank, meanwhile, estimates that the Chinese economy will grow 7.9%.

However, Taiwan will continue to benefit from the major global chip shortfall that last month forced auto giants, Volkswagen, Ford and GM to temporarily shut down production.

Such is the shortage, last week VW — which until now procures chips indirectly via suppliers like Robert Bosch and Continental — said it would consider sourcing straight from manufacturers to protect its supply.

"The extent of the global shortages of critical electronics components has become so severe that high-level consultations have been held with Taiwan involving key industry bodies as well as government officials from major industrial economies including the US and Germany," IHK Markit's Biswas told DW.

He said many of Taiwan's chipmakers had continued production over the Lunar New Year holidays earlier this month in order to try to meet backlogs of orders.

With demand expected to remain strong, TMSC has said it will increase capital spending by between $25 billion and $28 billion in 2021, a 60% increase from last year. Its local competitor, UMC, plans to lift spending on capital equipment by around half.

One black spot on the horizon is Taiwan's vaccine procurement strategy, which has suffered delays partly as a result of the successful handling of the pandemic. The island is lower down the priority list amid a global vaccine shortage.

Taiwan's tourism sector, which was hammered by the impact of the pandemic, is set to benefit from the return of foreign visitors. The island of nearly 24 million people welcomed 12 million tourists in 2019, the majority of which from elsewhere in Asia. China, Japan and Hong Kong topped the arrivals table. It plans to partially lift restrictions on foreign arrivals from next month.