Angela Merkel is in the United States for informal talks with George W. Bush at his ranch in Crawford, Texas. The nuclear stand-off with Iran and peace in the Middle East are on the agenda. 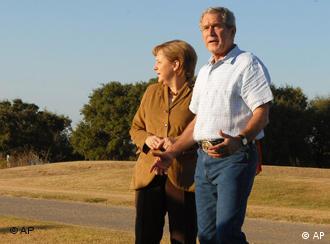 The two leaders are expected to use the 20-hour visit to discuss the Middle East peace process, the struggle against international terrorism and the situation in Darfur. It is also an opportunity for a display of unity over opposition to Iran's controversial nuclear program.

Merkel has worked hard to mend fences with Washington following clashes between her predecessor, Gerhard Schröder and President Bush over the US-led invasion of Iraq. Her invitation to Crawford is seen as confirmation of improved relations between Berlin and Washington.

DW-WORLD.DE looks at the state of current trans-Atlantic relations.

Merkel Heads to Bush's Ranch to Wrangle Over Iran

German Chancellor Angela Merkel and US President George W. Bush are both positive about this weekend's meeting at the president's Texas ranch, but neither side is predicting any policy breakthroughs. (09.11.2007)

US Wants More Than Merkel Can Give, Expert Says

Reginald Dale from the Center for Strategic and International Studies in Washington spoke to DW-WORLD.DE about German Chancellor Angela Merkel's two-day visit to the US this weekend, which begins Friday, Nov. 9. (09.11.2007)

Just after French President Nicolas Sarkozy flies out of the US, German Chancellor Angela Merkel flies in. Both European leaders have sought to improve their ties with the US, but the trio doesn't agree on everything. (08.11.2007)

German Chancellor Angela Merkel held talks with Saudi Arabian King Abdullah about Mideast peace efforts and Iran's nuclear program ahead of her trip to the United States, where her visit will focus on Tehran's plans. (07.11.2007)