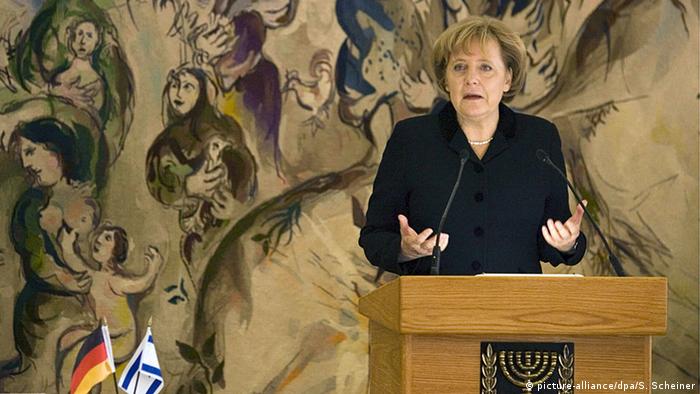 Merkel has been a welcome guest in Israel during the 16 years of her tenure.

While Germany grapples with the task of forming a new government, Chancellor Angela Merkel is heading to Israel. An earlier scheduled visit had to be postponed at the last minute in August because of events in Afghanistan.

Originally described by officials as "a working visit," it has the aura of a farewell trip. On Sunday she will meet Israel's new prime minister, Naftali Bennett. The intricacies of coalition-building are a common topic for both leaders.

Merkel’s departure from the world stage is being watched closely in Israel. While at times there’s been both criticism and praise in Israel, for example with regards to her refugee policy in 2015, Merkel is generally appreciated as a "true, supportive friend" of Israel.

That sentiment is reflected by locals in Tel Aviv's busy Carmel market. "I think she was good for Israel and certainly for Germany," says one.

In a nearby café, Alina Mejubovsky refers to Merkel's appearance. "Wow, she has this great style, I really like her, she is a tough girl." Another young passerby, Aviv Ambar, says that he didn't follow her policies closely but "from my German friends I understand that she did a lot of good things. And I believe it is good to have women on the frontline. I am happy she was there and sad that she is leaving." 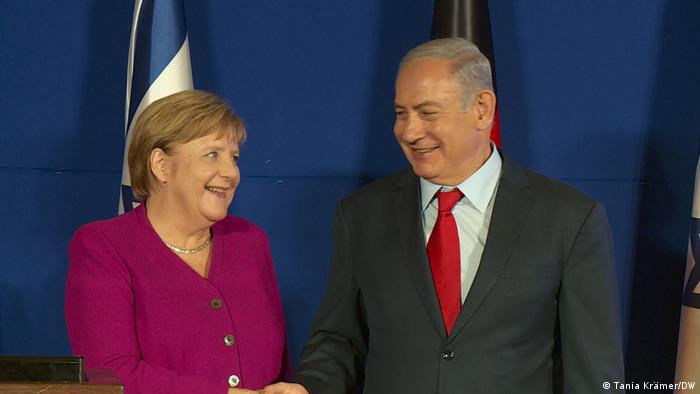 For 12 of her 16 years in office, Angela Merkel dealt with former Israeli Prime Minister Benjamin Netanyahu, now leader of the opposition. Despite the "special relationship" between the two countries, ties between the two leaders were sometimes described as slightly "difficult."

Political analysts point to Netanyahu's push to use political divisions within the EU and to prioritize countries like Hungary which were often at odds with German policies, or disagreements over settlement building in the occupied West Bank. Nevertheless, Merkel's unwavering support for Israel was never in question.

"80% of the center had reasons to like her," said Ofer Ashkenazi, director of the Richard Koebner Minerva Center for German History at the Hebrew University. "Here, Merkel has been some kind of a left-wing role model of a leader that can be firm but compassionate, that stands for morals, not self-preservation and so forth," he said, adding that the definition of the "Zionist left" in Israel is closer to "American moderate liberals."

Ehud Olmert, a long-term rival of Netanyahu, worked closely with the German chancellor during his time as prime minister from 2006 to 2009

In an interview with DW in Tel Aviv, Olmert reflected on his close working relationship with the chancellor while he was in office: "There are many historical dimensions to these relations, which obviously define the mutual commitment of both countries. And particularly I think there is a natural sensitivity in Germany towards the state of Israel. And I think Angela Merkel represents this moral sensitivity, more than any other leader."

He added that there "was a great understanding between her and me about the basic parameters for addressing the issues of the Middle East and the Palestinian issue."

German-Israeli relations have always been defined by the Holocaust, in which six million Jews were systematically murdered by the Germans. But since the establishment of diplomatic relations in May 1965, relations between both countries have grown steadily closer. Under Olmert and Merkel, those relations were further institutionalized by establishing annual intergovernmental consultations in 2008, for which the Israeli and German cabinets travel either to Berlin or Jerusalem.

To mark the 60th anniversary of the founding of Israel in 2008, Merkel became the first German chancellor to speak before the Knesset. In her address, she said that every German government before her had shouldered the country's special historical responsibility for Israel's security. "For me as German chancellor, therefore, Israel's security will never be open to negotiation," she said.

While Israel has maintained good relations with all the former chancellors and presidents of Germany, Olmert added: "There was an additional dimension to Angela Merkel, people loved her and felt for her. There was something about her attitude here, the way that she addressed herself to Israel and to the problems that Israel had to deal with."

Palestinian-Israeli conflict not high on the agenda

This will be Merkel's seventh visit to Israel in her 16 years in office — and most topics are likely to remain the same for the next German chancellor. One important issue expected to be on the agenda of this visit is Iran and its nuclear program. Western countries are aiming to revive stalled talks over the nuclear agreement, or the Joint Comprehensive Plan of Action (JCPOA).

While opposed to a return to the JCPOA in its current form, Naftali Bennett has signaled a more open approach to coordinate with the United States, who withdrew from the JCPOA in 2018, and other allies.

The Palestinian-Israeli conflict is not expected to feature prominently during talks, nor is she expected to travel to the West Bank city of Ramallah to meet with the Palestinian leadership there. Palestinians are used to the fact that German politicians come first and foremost to see their Israeli counterpart, says Mohammed Abu-Zaid, a translator in Ramallah. "If they had more time, they would make this trip to Ramallah for half an hour to tell the Palestinians: Listen, we are friends of Israel, but see, we are helping you too," says Abu-Zaid.

For some Palestinians, Merkel is closely associated with her refugee policies. "I think that she put Germany in a better place, when it comes to migrants and refugees that arrived there," says Sari Baz, a young NGO worker. "It's a pity she is leaving."

Palestinian Prime Minister Mohammad Shtayyeh describes German-Palestinian relations as "politically solid" and has referred to Merkel as a role model. "She always called for Israel to stop settlements in the Palestinian Territory," he said in an interview with DW in Ramallah.

Like most world leaders, Merkel advocates a two-state solution and has been consistently opposed to Israeli settlement expansion in the occupied West Bank. Yet some Palestinians and left-wing Israelis have also been critical of the chancellor and her policies for not being more outspoken on alleged human rights violations in the occupied Palestinian territories.

Prime Minister Shtayyeh hopes that Germany, one of the biggest donors to the Palestinians, will get more involved. "I think it will be so important, when it comes to the Palestinian-Israeli conflict, that Europe really puts its economic weight behind its political statements," he said.

Chancellor Angela Merkel has condemned the burning of Israeli symbols during protests against the US decision on Jerusalem. Germany's interior, foreign and justice ministers also expressed criticism.

The two-state scenario of Palestinians living alongside Israel remains the "only sensible alternative," Chancellor Angela Merkel has told Mahmoud Abbas in Berlin. The Palestinian president is also due to visit Brussels.