German Chancellor Angela Merkel and Palestinian President Mahmoud Abbas have held talks in Berlin. Abbas called for Europe to play a greater role in the Middle East peace process because he says the US is not neutral. 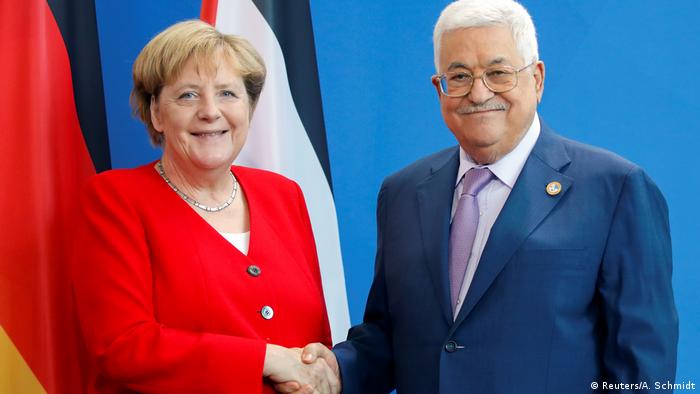 German Chancellor Angela Merkel called on Thursday for a two-state solution to the Israel-Palestine conflict even if this goal is "increasingly difficult to achieve."

Speaking alongside Palestinian President Mahmoud Abbas in Berlin, Merkel said that Palestinians and Israelis must be able to live side-by-side in peace and security.

Germany, as the biggest bilateral international donor to the Palestinian territories, will continue to support economic development and strengthening civil society, Merkel said.

Abbas said that Palestinians are ready to negotiate a two-state solution within 1967 borders, but he criticized US President Donald Trump for taking the side of Israel on such issues as the status of Jerusalem, refugees, borders and settlements.

The Palestinians have cut off relations with the United States and no longer view Washington as a neutral arbiter.

Germany, on the other hand, has taken efforts to support a multilateral approach instead of unilateral imposition, Abbas said.

"Therefore we demand that negotiations fall under an international umbrella" composed of a quartet of European states and Arab states to guide talks between Israelis and Palestinians, Abbas said.

The Israeli demolitions in East Jerusalem were "particularly egregious," Germany said in a statement with other EU nations. But Israel has defended its actions, saying they were necessary "for reasons of security." (23.07.2019)