US to merge consulate and embassy in Jerusalem, downgrading Palestinian mission | News | DW | 04.03.2019

US to merge consulate and embassy in Jerusalem, downgrading Palestinian mission

The US is closing its consulate in Jerusalem, with a Palestinian affairs unit in the embassy to take its place. One Palestinian official described the move as the "final nail in the coffin" for US peacemaking efforts. 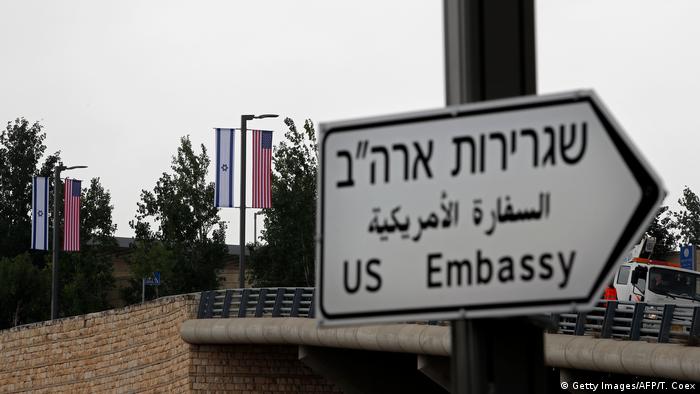 The United States announced that it will be merging its consulate and embassy in Jerusalem into a single diplomatic mission on Monday.

"This decision was driven by our global efforts to increase the efficiency and effectiveness of our diplomatic engagements and operations," State Department spokesman Robert Palladino said in a statement.

"It does not signal a change of U.S. policy on Jerusalem, the West Bank, or the Gaza Strip," he added.

The US Consulate had served for decades as the top diplomatic mission for Palestinians.

Diplomatic work will now be handled by a Palestinian affairs unit that is under the command of the US Embassy to Israel.

The move has raised fears among Palestinians that US President Donald Trump's administration is downgrading the handling of their diplomatic concerns and that Washington is no longer working for a two-state solution.

When plans for the merger were announced by US Secretary of State Mike Pompeo last fall, Palestinian official Saeb Erekat called the decision "the final nail in the coffin" for the US role in a Middle East peace process.

The merger also means that diplomatic channels with Gaza and the West Bank will now be handled by US Ambassador David Friedman — who has long supported the controversial West Bank settler movement and has been an outspoken critic of Palestinian leaders.

Trump sparked global outrage over his December 2017 decision to recognize Jerusalem as the capital of Israel and to move the US Embassy there from Tel Aviv.

Jerusalem is the home to numerous sites that are holy to Judaism, Islam and Christianity. Palestinians want to establish an independent state with east Jerusalem as its capital.