Germany's chancellor has described the pogroms of November 9, 1938 — better known as Kristallnacht — as a shameful part of German history. For German President Frank-Walter Steinmeier, anti-Semitism is far from defeated. 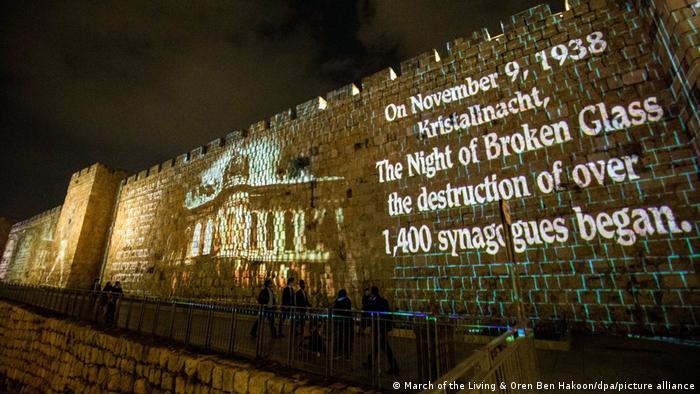 Chancellor Angela Merkel on Monday spoke of Germany's shame over the events of Kristallnacht, the night when a pogrom was unleashed on the country's Jewish population and when rioters in Germany, Austria and the Südetenland destroyed more than 250 synagogues.

Most commonly referred to in English either as "Kristallnacht," or as the "Night of the Broken Glass," it represented a new and violent dimension to the Nazis' systematic attempts to persecute Jews, and is seen by many as a prelude for the Holocaust.

Merkel's message was part of the "Let there be Light" initiative, which sees places of worship and other institutions around the world lit up to remember the events of 82 years ago. Kristallnacht saw Jews terrorized throughout Germany and Austria. Some had businesses destroyed and some were murdered. Others were among the earliest victims of the Nazi concentration camps.

"We remember the disgrace of November 9, 1938, the pogroms against Jewish fellow citizens throughout the country, the people driven to their deaths, the burning synagogues, the destroyed stores," said Merkel. "We commemorate the victims of the crime committed by Germany against humanity, the Shoah, in shame." 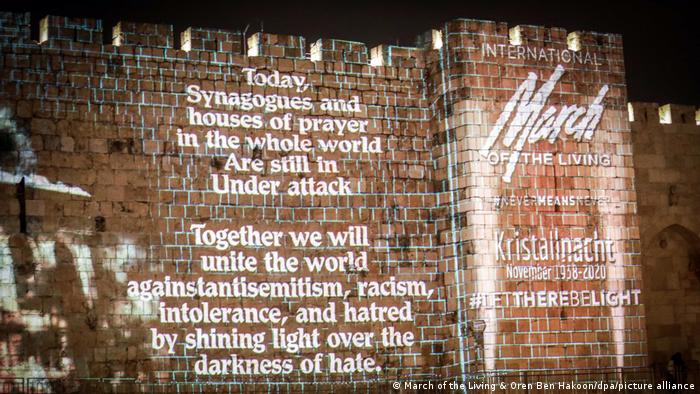 As part of the worldwide event, prayers and messages from all over the world are being projected onto the walls of Jerusalem's Old City. A memorial service, with international online participation, was also planned at the Jerusalem residence of Israeli President Reuven Rivlin. In Germany, some commemoration events were cancelled due to the coronavirus, while others were held behind closed doors or digitally.

German Federal President Frank-Walter Steinmeier, together with his Israeli counterpart Rivlin and Austrian opposite number Alexander Van der Bellen called for solidarity in the fight against antisemitism.

"The dark shadows of the past have not disappeared from our streets," Steinmeier said in a joint video message. "We stand together, in Vienna, in Jerusalem, in Berlin." 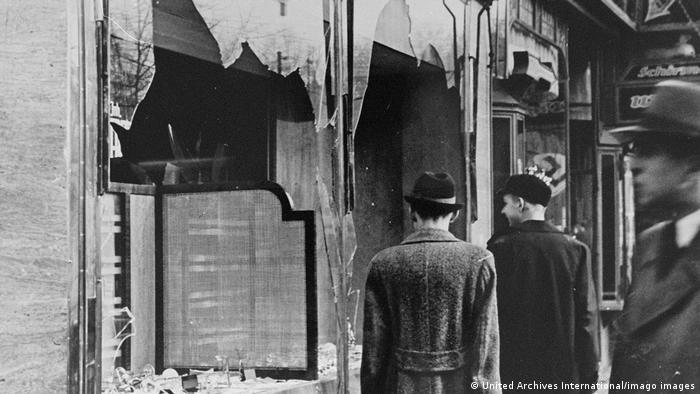 After years of persecution and expulsions, 'the Night of Broken Glass' was the point when the Nazis' anti-Semitism turned openly violent

In a separate message directly to Rivlin, Steinmeier said the "sickening outburst of violence" of 1938 was a "stark warning to us today." After German Jews were warned by the country's antisemitism commissioner against wearing the traditional Jewish headwear of the kippa, or yarmulke, Steimeier said Kristallnacht represented a "pressing warning" to us today.

The commemoration comes just over a year after the Halle shooting in which a 27-year-old neo-Nazi attacker shot two people dead at a synagogue in the eastern German city of Halle.

Josef Schuster, president of the Central Council of Jews in Germany, on Friday said that a threat still loomed over Jewish life, and that Judaism was not accepted by all as an implicit part of society.