On Friday, the German city of Halle commemorates those killed in an attack on worshippers on Yom Kippur. Despite a wave of solidarity, many in the Jewish community feel the reaction of authorities has been "halfhearted."

Max Privorozki was one of 52 people celebrating Yom Kippur inside a synagogue in Halle on October 9, 2019, when a 27-year-old man from a nearby town attempted to blast his way into the building with a homemade arsenal of guns and grenades.

The attacker failed largely because of the Jewish community's own security precautions: a strong locked door and a CCTV camera. They prevented what could have been the worst anti-Semitic atrocity in Germany since the Holocaust.

German police, in contrast, did not come out of the attack in the eastern German city looking good.

"We said several times that we wanted police protection in front of the synagogues and communities in Saxony-Anhalt [the state in which Halle is located], just like in the big cities: Berlin, Munich, Frankfurt," Privorozki, the head of the local Jewish community, told public broadcaster MDR the next day. "But we were always told: Everything's wonderful, everything's super, everything OK."

It has since emerged during the still-ongoing trial that police failed to notice the attacker driving past the synagogue during his escape a few minutes later, having by then killed two non-Jewish German people.

That negligence was "scandalous," said Josef Schuster, president of the Central Council of Jews in Germany. The umbrella organization is Germany's foremost for the Jewish community. 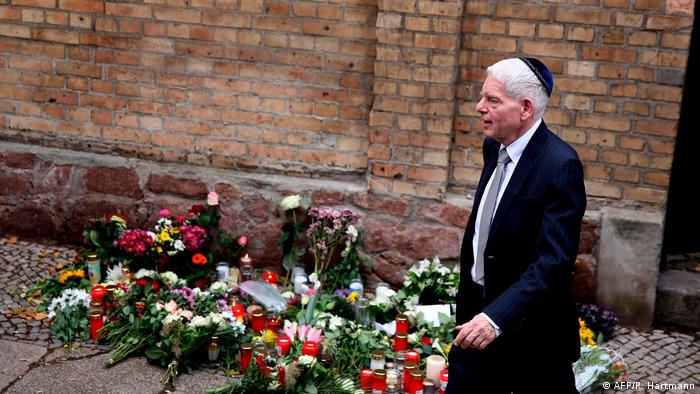 Josef Schuster condemned the Saxony-Anhalt police after the attack

Breaking trust is easy, building it is hard

The local police has tried to repair the damaged trust, and Halle's Jewish community is now in constant contact with the police about security issues.

But incidents in the past year have not exactly enhanced relations. In early June, a Halle policeman was disciplined after being called to document a paper swastika that had been placed outside the city's Jewish community office. He reported that he had found nothing, but as the building's own CCTV footage showed, he had removed it himself after apparently accidentally treading on it.

"As long as there is this halfheartedness, it won't work," said Sigmount Königsberg, anti-Semitism commissioner for the Jewish community organization in Berlin. Königsberg also pointed to previous instances of anti-Semitic crimes being overlooked or downplayed: In 2015, a court in Wuppertal, western Germany, ruled that an arson attack on a synagogue was not necessarily anti-Semitic because the perpetrators had not shown any sign of being anti-Semitic before. "All you can do is hold your head," Königsberg told DW. "Breaking trust is very easy, building up trust takes longer."

The political attitude hasn't always been helpful either. Earlier this week, Saxony-Anhalt Interior Minister Holger Stahlknecht caused outrage by saying that the new obligation to protect Jewish facilities meant police officers might not always be punctual in responding to other calls (though not emergency calls, he hastened to add), and called for people's understanding.

"A state interior minister is not shy of presenting Jews as privileged and playing them off against other population groups," Schuster told the German news network RND. "By that he advances anti-Semitism."

How do Jews feel?

Protecting local minority communities is state police business, which often means there are varying levels of security and sensibility among authorities across Germany. Ilia Choukhlov, a member of Nuremberg's Jewish community, said he has seen nothing to suggest synagogues are better protected than they were before the Halle attack.

"Nothing has changed," he told DW. "On Yom Kippur last week there were a lot of synagogues where there was no police outside. There's been a lot of talk, but when you go and discuss practical security measures, you just get told: No, no, the police will protect you, everything's fine."

The truth is many Jewish people do not feel safe in Germany, as Chancellor Angela Merkel acknowledged in a speech in September to mark the 70th anniversary of the founding of the Central Council of Jews. Choukhlov has noticed this: "There's talk again of emigrating or moving to bigger cities where you can disappear better," he said. "Or this term is being used more: inner emigration — where you don't show that you're Jewish outside, you just express it in your own four walls. I'm seeing things that I've never seen before in Germany."

The term "inner emigration" was first coined in the 1930s to express the rejection of National Socialist ideology by authors and artists.

The underlying inference of these testimonies is that the police's complacency reflects a wider apathy in German society: the idea that Germans have failed to pay attention to the growing anti-Semitism in their midst.

The radicalization of the Halle attacker Stephan B., as pieced together from his own testimony, showed how the Islamophobia that found new life in Germany after the refugee influx of 2015 has developed to include a brand of anti-Semitism that is horribly familiar from the country's history. In the "plan" that he published online before the attack, the attacker made clear that he espoused an age-old anti-Semitic narrative that Jews wielded ultimate power in the world.

In the days after the attack, thousands of people came out in Halle to form a human chain to symbolically protect their city's synagogue. "It was a new experience for the Jewish minority in Germany that there was a significant measure of solidarity both in Halle itself and across Germany," he told DW. "People expressed their condolences and support. That was without doubt something new and positive." 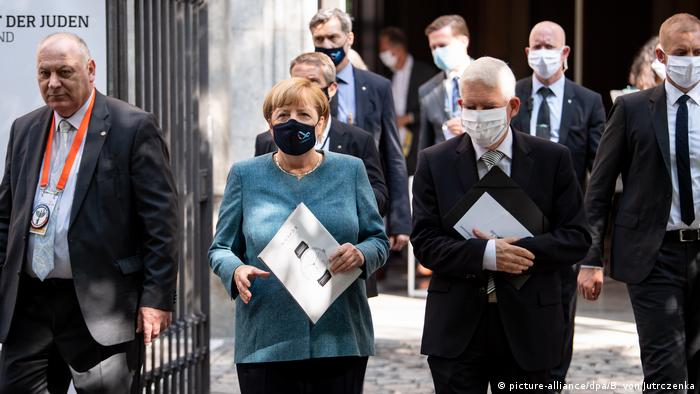 Merkel has acknowledged that many Jews don't feel safe in Germany

How are authorities addressing the problem?

Botsch also said that at a political level, many measures had already been initiated before the attack, with the introduction of anti-Semitism commissioners and other contact offices both at federal and state levels, and more anti-Semitism research programs.

"Several measures and concepts were confirmed, and maybe accelerated" by the Halle attack, Botsch said. Berlin probably has the most progressive system, he remarked, with anti-Semitism commissioners for both the police and the judiciary, as well as one for the state government itself. But other states are much further behind, he added.

Among these new initiatives has been the launch of online portals to report anti-Semitic incidents, brought together in 2018 as the Federal Association of Departments for Research and Information on Antisemitism (RIAS), which now has regional offices in four German states. This has helped to ensure that what Königsberg calls the "anti-Semitic context" of certain crimes might no longer be overlooked.

Annette Seidel-Arpaci, director of RIAS in Bavaria, said her organization had recorded seven anti-Semitic incidents outside synagogues in Bavaria in a year, but she thinks that is almost certainly just the tip of a big iceberg, "because I'm sure not everything is reported to us." "In most cases, it's true that passersby don't intervene," she told DW.

As Rabbi Andreas Nachama wrote in the Jüdische Allgemeine newspaper this month, "there is much more to do," even a year later.