One year after Halle synagogue attack: survivor looks back | Germany | News and in-depth reporting from Berlin and beyond | DW | 09.10.2020

One year after Halle synagogue attack: survivor looks back

Mollie Sharfman was one of the 52 people celebrating Yom Kippur in the synagogue in Halle on October 9, 2019. At midday, there was a break in the service and she left the building to go for a walk in the nearby park.

That's when she heard the shots at the main door — the same door which she had stepped through just minutes earlier. It was only the building's heavy wooden door that protected more than 50 Jewish worshippers inside. When the attacker failed to get in, he killed two bystanders, one in the street and the other in a nearby kebab shop.

Read more: One year after the synagogue attack: Do German Jews feel safer?

Sharfman, sitting in a nearby park, stayed rooted to the bench and listened, unable to move. Until this day she finds it hard to believe that she managed to narrowly escape.

"My life is now split into two parts," she said. "Before the attack and after."

The anti-Semitic attack sent shock waves through Germany. There were public expressions of solidarity for Halle's Jewish community, people took to the streets across the country to pay their respects and Interior Minister Horst Seehofer was quick to arrive at the scene. Politicians from all parties promised better security and more police surveillance. 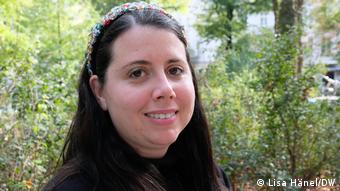 After a few weeks, public interest died down and that's when Sharfman's problems really began.

"As things got back to normal that's actually when things got more difficult for me," she said. "Slowly I started feeling a lot of stress and very intense feelings of anxiety that made it hard for me to manage my daily life." A few months after the attack, Sharfman was diagnosed with post-traumatic stress disorder. She started therapy and is slowly beginning to see some improvement.

Read more: Who were the victims of the Halle attack?

Her Jewish faith and identity have become her main source of comfort and support — even though being Jewish was precisely what had made her a victim. Sharfman has always been an active member of the Jewish community. She came to Berlin one and a half years ago and has since taken on a leading role in the Jewish students' organization Morasha Germany. She was part of a group that went to Halle for Yom Kippur to experience Jewish life in a smaller German town.

"For many people who know me, it was hard to understand that I am this reliable person who takes on a leadership role, but at the same time I am also this person who is really struggling to come to terms with the attack," she said.

When the trial began this summer, 10 months after the attack, Sharfman was the first witness to testify in court. This was also the moment when she began to see herself as a "survivor."

When she had first heard a journalist describe her as a survivor, she had rejected the notion as absurd. "Survivor" was the role of her grandfather — he survived the Holocaust but lost his whole family, before emigrating from Europe to the United States. Sharfman was the first grandchild in a family that was all but wiped out.

"My grandfather is a Holocaust survivor, my whole life, that's been his role. I was proud of that. He went through a very terrible thing and he was able to live, and live a life and give us love and teach us Judaism," said Sharfman.

She referred to her grandfather in her testimony before the German court. The accused started to laugh whenever she spoke, and that initially upset her. But, she said, she found the strength to "stand in front of a person that has so much hate, who tried to hurt us, to say to him 'you messed with the wrong people!" 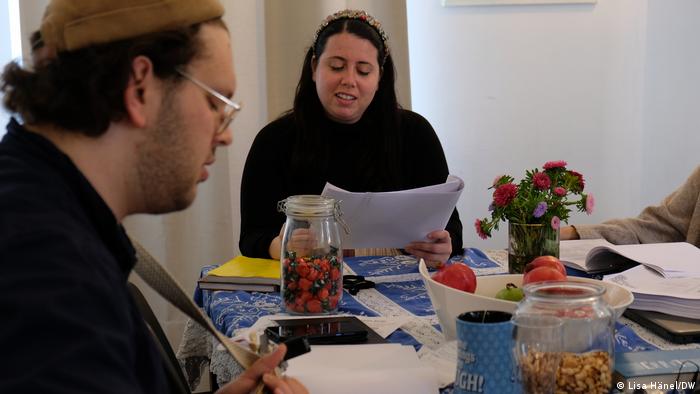 Looking for a deeper meaning

A few weeks after her appearance in court, Yom Kippur came around again. Sharfman met up with other members of the congregation in Berlin, where they celebrated and sang together. "The words of the songs really resonate with us, they describe what we went through and remind us that even in hard times, God is there and will stand by us, no matter what happens," she said. She remembers a woman telling her that it is because of these songs that the Jewish people will live on.

One year after the attack, Mollie Sharfman still finds it hard to deal with the fact that her life was spared. She is still trying to make sense of what happened and why the Jewish community still can't feel safe in Germany.

The trial of Stephan B., suspected of carrying out the Halle synagogue attack, has begun in Germany. He expressed his virulent anti-Semitic world-view on the first trial day. DW's Ben Knight reports from the courthouse.